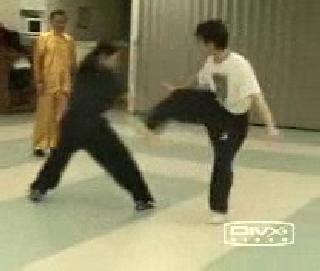 How are combat sequences composed? They are composed from combat situations, and then are gradually improved upon as the exponents progress to higher levels. These series of video clips taken impromptu at the Special Shaolin Kungfu Course in Toronto in 2004 show how this happened.

For example, instead of using “Black Tiger Steals Heart” and “Single Leg Hand Sweep”, Michael uses “Green Dragon Shoots Pearl” and “Dragon Expresses Marvelous Powers” instead. The last pattern in the video clip, “Phoenix Nods Head” is a progression, and how this comes about is revealed in another video clip.