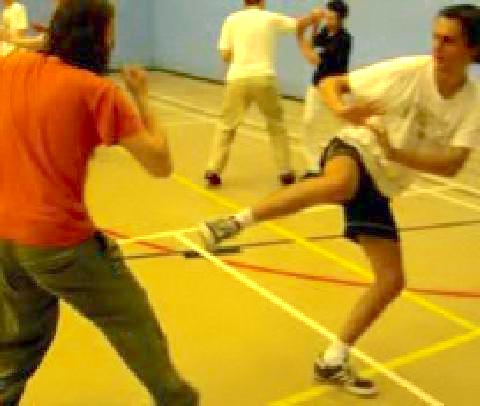 Congratulations to all participants of the UK Summer Camp Shaolin Kungfu Course. You are a shining inspiration to those who wish to apply kungfu techniques and proper stances in free sparring, without resorting to Kick-Boxing and bouncing about.

While some of you, like Shamsher, Shaim, Clare and Andrea, are fresh beginners and others like George and Alex have a few years of experience, most of you have practiced Shaolin Kungfu for only a year, yet you could effectively use kungfu techniques to spar reasonably well — after undergoing the course for only four days! Moreover, you were not tired or panting for breath after about an hour of continuous sparring, and you did not sustain any injury at all. These indicate respectively that you have been successful in practicing Shaolin Kungfu as an internal martial art.

More significantly, instead of attempting to hurt or outdo your opponents as many other martial artists would do, you slowed down your momentum to help them, and often told them the counters to your own attacks, and you all had so much fun. These indicate that you have been successful in practicing Shaolin Kungfu for spiritual cultivation, enabling you to be considerate even to opponents, and be calm and relaxed even in demanding situations.

Special credits go to those participants, like Claude and Masita, Steve and Lorena, who have learnt kungfu from non-Shaolin Wahnam sources. They demonstrate that with the right sparring methodology, kungfu practitioners of any styles can use kungfu techniques for effective sparring.

The video clips were taken at random and are released below according in the order they were recorded. Thus they may not show your sparring at your best moments. Nevertheless, you will be pleased to see how well you sparred. All the four categories of attacks, namely striking, kicking, felling and gripping, were involved, though the uninitiated may not realize there were felling and gripping attacks because you neutralized them effectively. There were, of course, also mistakes and weaknesses, and identifying them will help to improve your combat efficiency.

We can expect that some people may criticize the way you sparred. No matter how well one's achievement is, there is bound to be some negative comments from some quarters. You don't have to worry about others' negative comments. They may, for example, comment that your sparring lacked force, or that it would not work in real fights as nobody was hurt. They probably do not understand that with internal force a seemingly gentle strike can be very damaging, and that a chief reason for training a martial art is precisely not to be hurt in sparring.

Nevertheless, it is important to remember that being able to apply kungfu for sparring does not make one unbeatable. He can still be beaten by a better fighter who uses other martial arts. But we can be sure that as we practice kungfu, we shall be more combat effective in our sparring or fighting by using kungfu rather than another art we have not practiced. More importantly, we shall definitely get more benefits in terms of health and spiritual development.

Besides the practical benefits we have obtained, two philosophical lessons we have learnt from direct experience in the course are that