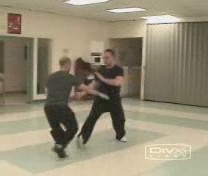 Another common question is whether a kungfu exponent can still apply his kungfu patterns against an opponent who uses free-fighting or another martial art style. The answer is certainly “yes” — otherwise kungfu would not be a complete art. Of course those who are not systematically trained would be unable to do so against any fighters using any styles or no styles even though he may be able to perform the kungfu patterns beautifully in solo practice.

Indeed, for a trained kungfu exponent, fighting against someone using free style would be easier than against another opponent using a kungfu style because kungfu patterns were actually sophisticated development over many centuries from free style fighting. In the training session shown in this video clip, after having used appropriate kungfu patterns to overcome various attacks from Anthony, Anton explains the philosophy behind the patterns he used. The patterns in the combat sequences are taken from the The Shaolin Five-Animal Set.