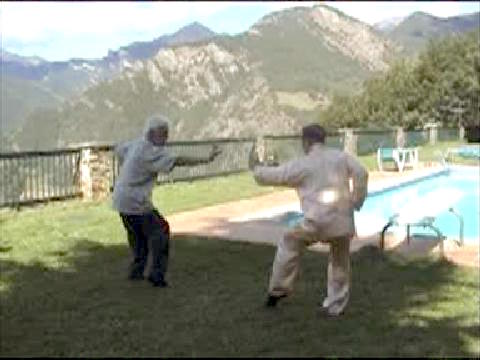 To be Able to Free Spar in Just a Few Days

Would you believe that one can learn in just a few days to use typical kungfu patterns for free sparring? This was what participants, including some fresh beginners, at the Andorra Regional Shaolin Kungfu Course of August 2006 accomplished.

Understandably not many people may believe that students can learn in just a few days to use typical kungfu patterns for free sparring. But that is true. That was what happened at the regional Shaolin Kungfu Courses held recently in Andorra in August 2006, in Switzerland also in August 2006, and in Finland in September 2006. A similar course will be held in Portugal from 31st Jan to 2nd February 2007.

The video series in Part 1 here and in Part 2 on another webpage reveal some of the secrets that enable our students to free spar using kungfu patterns. Some Shaolin Wahnam members have rightly expressed concern that we reveal these secrets. We do so for the following good reasons.

Participants at these three courses ranged from fresh beginners to instructors. It is a special feature in our courses that participants of vastly different levels may attend at the same time and they benefit from the courses accordingly to their own developmental stages.

Naturally, even though the beginning students could free spar using kungfu forms, their combat skills were still low, and they would be easily defeated by experienced martial artists of other styles. But what is certain is that if they spend some time, say a year, practicing what they have learnt at the course, they will be more combat efficient than they would have been had they spent the same period of time in random or free style fighting.

What is more significant is that the Shaolin combat training will contribute to their physical, emotional, mental and spiritual development, whereas randomly punching and kicking one another would be detrimental to their health — physically, emotionally, mentally and spiritually.

One of the course participants, Alejandro Nieto, of Shaolin Wahnam Spain, have records of the lessons in video, and he has taken the trouble to divide the long video into manageable clips to be presented here. We would like to thank Alejandro for his effort and kindness.

The Andorra video clips are presented in two parts. The first part, Sharing Secrets in Combat Application is listed below. The second part can be accessed at Applying Kungfu Patterns in Free Sparring. 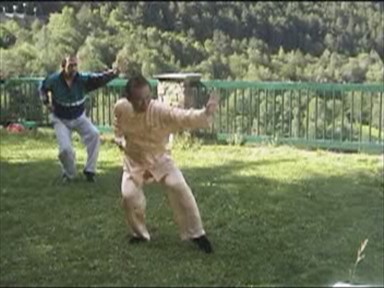 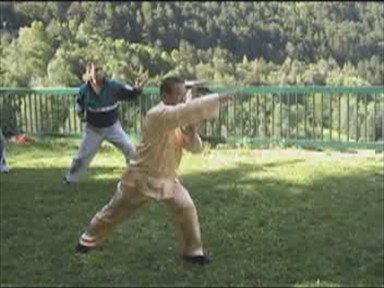 When performing the sequence in patterns, i.e. one pattern at a time, you should focus on picture-perfect form, reasonable force and appropriate speed so that you would have the best possible technical advantages in a given combat situation. This is a main objective in solo sequence practice at this level. 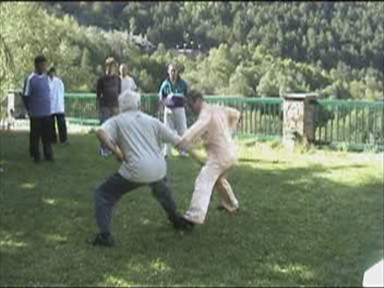 The initiator's mode and the responder's mode are matched together in combat application. It is commonly asked whether such training, where all movements are pre-arranged, is useful because actual combat does not follow a pre-arranged sequence. Of course, it is useful. This is only the beginning stage of combat training; it is not free sparring yet.

Initiator's Mode of Sequence 1 Performed as a Sequence 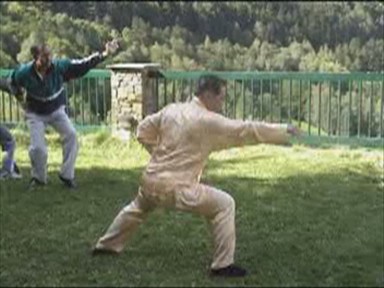 Having familiarized yourself with responding to various typical attacks spontaneously using patterns that give you the best possible advantages, the next stage is to perform these patterns smoothly, rather than in a staccato manner. This is performing in a sequence, rather than pattern by pattern.

Responder's Mode of Sequence 1 Performed as a Sequence 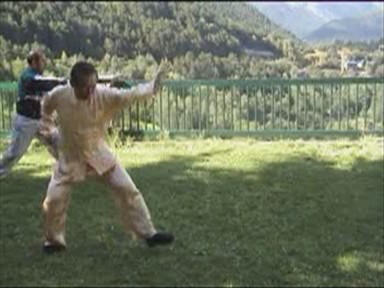 Your performance of the sequence, both in the initiator's mode or in the responder's mode, should be fast, powerful and smooth, and you should not be panting or tired after the sequence. An effective method to accomplish this is using one breath for the sequence, expressed as “yiat hei hors eng” in Chinese (Cantonese), or “completed in one breath”. 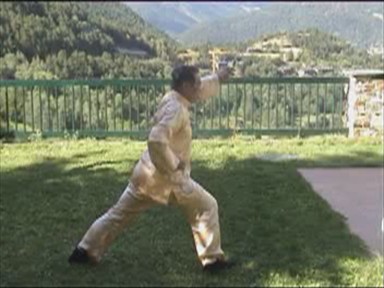 Sequence 2 here introduces a side attack as well as the right leg mode. The techniques should be in picture-perfect form and with reasonable force and appropriate speed. 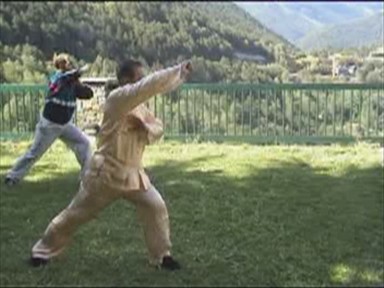 It is very important to have a “guard hand” when executing a “horn punch” in the pattern “Hang a Golden Star at a Corner”. This reminds you of “safety first” — in kungfu as well as in life. 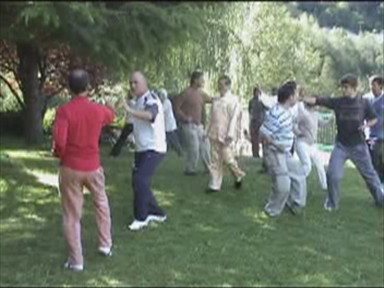 The form of some participants is not picture-perfect, they still use mechanical strength instead of internal force, and their movements are not smooth. All these are understandable. This is only the second day of their training. Considering that many kungfu practitioners cannot apply their kungfu forms for combat after two years, some even after twenty years, their progress after two days is remarkable. 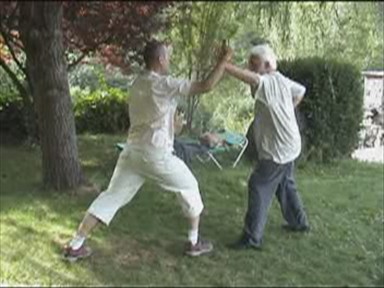 Here is three-step sparring of Sequence 2. Three-step sparring is a progression from one-step sparring. First, the steps are pre-arranged, next control is gradually released and sparring partners may select patterns from a fixed range of choice, and eventually the movements are free. These are effective methods in combat training. 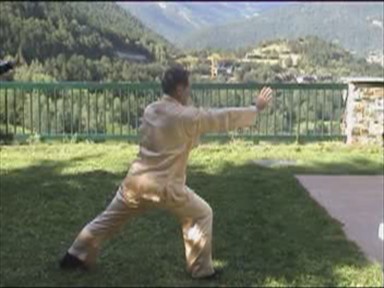 Three patterns for the attack-mode in the three-step sparring shown in the previous video clip are performed here in a fast, powerful and relaxed manner, without panting for breath or being tired at completion. Chi flow and breath control are two important factors for this feat. The principles used to perform three patterns fast, powerfully and relaxingly are the same as to perform ten or more patterns. 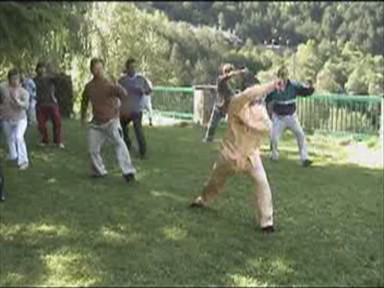 Besides being fast, powerful and relaxed, you should also be elegant, well-balanced and agile in your movements —- and in other aspects of life. These qualities can be accomplished through the “Six Harmonies”, i.e. the external harmonies of footwork, body-work and hand-movements, and the internal harmonies of essence, energy and mind, as demonstrated here in the defence-mode of the three-step sparring shown earlier.

Benefiting from the Knowledge and Experience of Past Masters 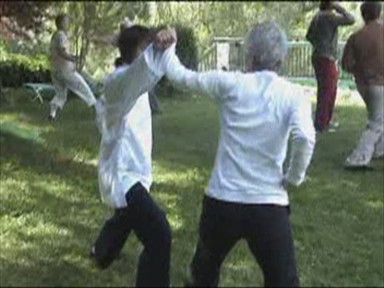 Given sufficient practice, students may eventually reach a masters' level, and possibly in less time because they are able to take advantage of the masters' knowledge and experience, whereas those who bounce about and hope to discover secrets from their own trials and errors may never arrive as they deny themselves the vast accumulated knowledge of past masters. 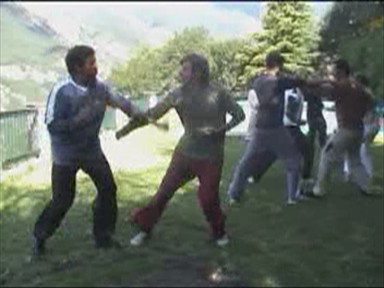 The two participants in the foreground are kungfu beginners, though they are leaders in their professions. Compared to kungfu masters, their movements are awkward and mechanical, though powerful. But when we consider that they have learnt kungfu for just two days, their performance here is remarkable. 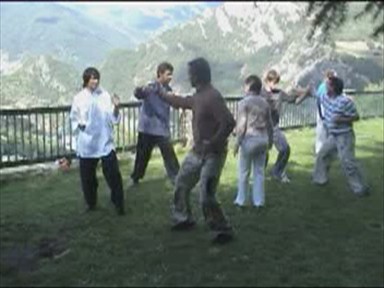 Your training partner is your training partner, and not a real enemy. If he fails to defend, you hold your strikes to avoid hurting him. If he is slow to react, you purposely slow down to allow him more time. You train for mutual benefits, not bash each other in vengeance. The benefits are not just limited to martial art, they extend to our daily life, like patience, tolerance and consideration . 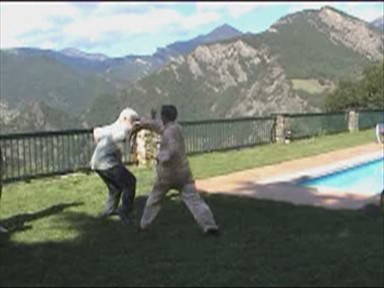 This video clip shows Sequence 2 and Sequence 3 performed as one sequence. Notice that two methodological steps are involved here, namely “Continuation” and “External Change”. Sequence 2 continues into Sequence 3, but there is a change. Here Sequence 3 does not start at the first pattern, but at the third pattern.

All the videos in this section can be viewed below. Please click the picture or the caption to view the video.