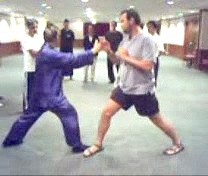 After learning the basics and a Taijiquan set, course participants progress to learn Tui Shou or Pushing Hands.

One main reason why there is little description on Pushing Hands, even in Taijiquan classics, is because Pushing Hands involves skills rather than techniques. As skills are “invisible” there may not be much description or illustration for it, unlike techniques which are visible and can be readily illustrated in forms.

Pushing Hands is an ingenuous method to develop many combat skills in Taijiquan. While such methods are also found in other kungfu styles, like “Sticking Hands” in Wing Choon and “Kneading Hands” in Wuzuquan, it is in Taijiquan that this method has evolved to be most sophisticated. 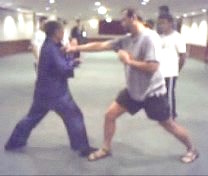 Course participants ensure that their stance is correct and comfortable as they are going to be in the same poise for some time. The initiator moves his right hand forward to touch the right shoulder of his training partner. The partner will not resist, but just yields or lets go to allow the initiator's hand in. His objective is to sense the attack. Their left hand must be “alive”, as neglecting their left hand is a common mistake in such practice. 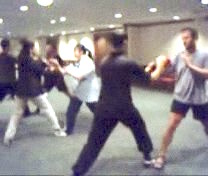 Have you wondered why “Pushing Hands” is often carried on in circles? The circle is an effective way to neutralize an opponent's force as well as direction. When an opponent strikes you, instead of meeting his strike head-on, you yield or follow his strike a short distance, then using his momentum deflect it and turn it back to him. This aspect of Pushing Hands, where one yields, deflects and counters in one smooth movement, known as “hua-jing” or neutralizing-force, is practiced here in stationary pose, without moving the body or the legs. 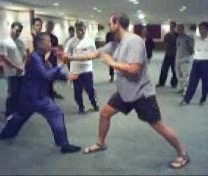 If an attack is long range, like an opponent moving his leg into you, you would have to move your leg or legs backward. This is neutralizing with “bo-fa”, or footwork. There are some mistakes to avoid in stationary Pushing Hands, where an opponent has moved in but the practitioner leans back awkwardly. 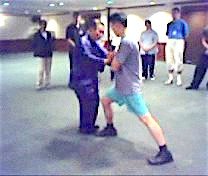 This video clip shows a progression from stationary Pushing Hands to mobile Pushing Hands. There should be leverage in pushing. One should push from his back leg, and not from his shoulders. This gliding in to push is meant as a practice to develop certain skills. In actual combat the practitioner could have struck the opponent. Secondly, it is very important to “close” or “cover-up” the opponent so that it would be difficult for him to strike while you push. 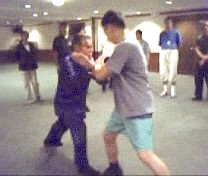 Pushing from the Back Leg 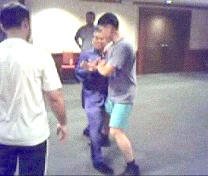 The Importance of Coverage

While pushing, it is important to close or cover not only an opponent's hands but also other parts of his body, such as his head and legs, so that he has little or no opportunity to counter strike. A common mistake in foot placement is where an opponent may kick the practitioner's groin. It is not a question of whether the opponent knows how to exploit the weskness but that we do not give away this weakness in the first place. Notice that with good technique, a lady can push away a hefty man. 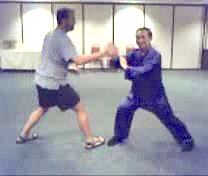 Defence against the Glide in Frontal Push

As an opponent glide his front leg forward for a frontal push, move back accordingly. The defence lies not just in the footwork but also in the body-movement and hand-technique. Besides spacing, timing is important. 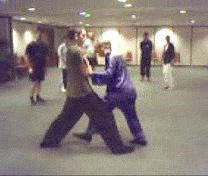 Defence against the Glide in Frontal Push

Instead of gliding your front leg forward, you may step your back leg forward for a frontal push. It is very important to cover the opponent so that he cannot counter strike. The push starts from the back leg, controlled by the waist and end with the hands. The practitioner must be stable at the end of his push. 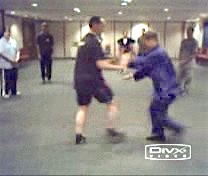 As the initiator steps his back leg forward for the frontal push, the responder steps his front leg backward to neutralize this long range attack. Besides the footwork, body-movement and hand-technique are also involved. This corresponding retreat, i.e. stepping back against stepping forward, and gliding back against gliding forward, is for the purpose of practice. 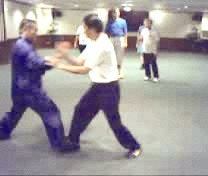 One way to gain a technical advantage over your opponent is use your preferred hand-mode or leg-mode against his unaccustomed hand-mode or leg-mode. For example, if your opponent's favorable mode is to have his right hand and right leg in front, if you can maneuver him to use his left hand and left leg in front, you would gain a technical advantage. One way you can achieve this is by changing hands or changing footwork. 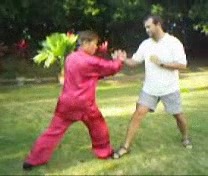 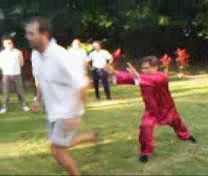 Getting to an Opponent's Back

Here is how to get to an opponent's back. In actual combat we would strike him, but in this practice session we would push him from the back. We must be careful of various ways the opponent can strike us in surprise while getting to his back. 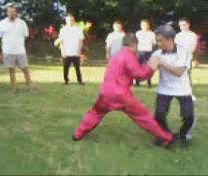 The Tactic of Continued Attacks

Course participants use the tactic of continued attacks as well as the tactic of confusing attacks. Their training partners can neutralize the attacks despite the use of tactics because they know the tactics. Should they apply the tactics to an opponent who does not know, he would have difficulty defending himself although he may know the defence techniques but not the tactics. 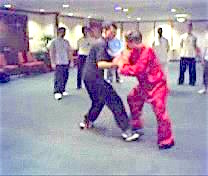 The Tactics of Instant Counter and of Interception

The difference between instant counter and interception is that in the former the responder allows the attack to be completed, then counter-attack instantly, whereas in the latter the responder intercepts the attack and counter-attacks before the initial attack is completed. In these two tactics, the practitioner lets the opponent takes the initiative, and exploits his initiative. In the tactics of continuous attack and the tactic of confusing attack, the practitioner takes the initiative.