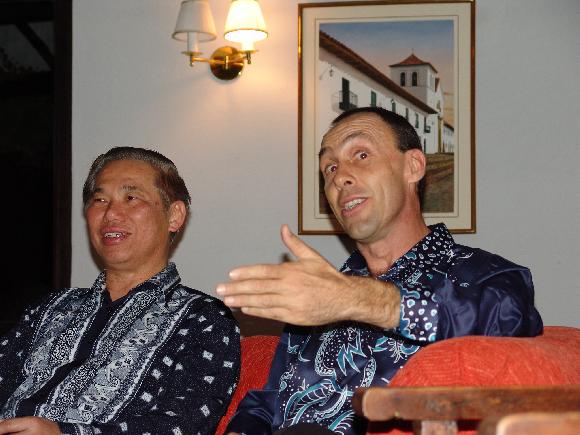 After an intensive training session, course participants to the VIP Taijiquan Course of September 2005 at Villa de Leyva in Colombia, most of whom are corporate presidents and their wives, gathered together for some good wine and singing. They invited Sifu Wong and the instructors, who happily joined them.

Sifu Wong mentions that there is a Chinese saying as follows, “Singing and drinking wine in good company — how often can that occur in life?” It is, of course. a rhetoric question, meaning we should value such rare opportunities. It is also in line with the Shaolin Wahnam concept of a scholar-warrior, one who excels in his work as well as enjoy life wholesomely.

The following video clips show Sifu Wong singing. The video clips are contributed by a corporate present who wishes to remain anonymous. We wish to thank him for these rare clips. 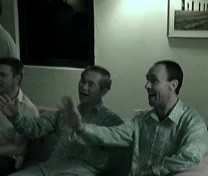 While Sifu Wong was holidaying in Venice with Sifu Rama, he heard a beautiful Spanish song called “Solamente Una Vez”, which means “Only One Time”. Not knowing the wordings of the song, Sifu Wong lamented that it glorified having love for one night, then the lovers go their separate ways the next morning. Sifu Rama told Sifu Wong that this wasn't the meaning. In fact the meaning of the song is beautiful, to love and beloved only once and forever. Sifu Wong is very pleased with the meaning, saying that that is what we in Shaolin Wahnam advocate. 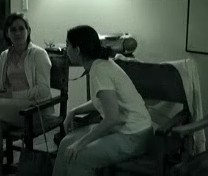 The wife of a corporate president sang a song for Sifu Wong. She said that she didn't know whether it was Chinese or Japanese. If it was Chinese, she hoped Sifu Wong would sing a song too. It turned out the song was Japanese.

The lyrics in Japanese are as follows:

The meaning is as follows:

Zuizui (for sound effect). The sound of fermented bean paste. The head samurai of the procession carrying a Tea Bowl has arrived. So everyone close your doors. Shyan (sound of doors closing). Once the procession has passed, what relief we all feel. As the procession passes, no one dares to breathe. It is so quiet that one can hear mice scrabbling about the straw rice containers. The mice eat the rice. Chyuu (sound of mice). Even though father calls, even though mother calls, nobody dares to move. Someone near the well has dropped and cracked a rice bowl. Who did it?

Both the lyrics and the meaning are provided by Sifu Emiko Hsuen.

Are You Sleeping, Brother John? 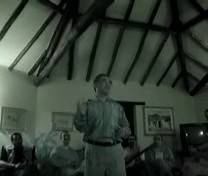 Although the song was Japanese (see the video clip above), Sifu Wong said he would sing a song for them too. He was not a good singer, he said, but he would sing them a simple song which he was fond of and which he learned long ago as a boy scout. 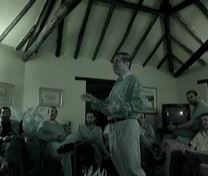 The group, who is Spanish speaking, responds with the French, and the original, version of the song. The lyrics, supplied by Hubert, is as follows: Frère Jacques, Frère Jacques, Dormez-vous, dormez-vous? 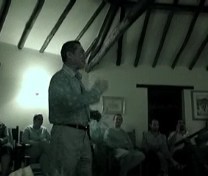 Singing and Drinking Wine in Good Company from Wong Kiew Kit on Vimeo.