USING SIDE KICKS AGAINST A MUAY THAI FIGHTER 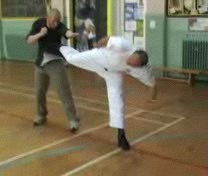 Side-kicks, as in the Shaolin pattern “Happy Bird Hops up Branch” is an effective counter against a Muay Thai fighter's or a Boxer's approach. Often it does not matter what attacks the Muay Thai fighter or Boxer may used. A side-kick can often hit him or at least prevent him from advancing.

You may like to hear the following “inside” comment by Darryl. “During the demonstration, I never noticed the delicate way Kai was opening my ribs with his arm. It was only when I watched this clip afterwards that I realised the subtleties of his movements.”

Using Side-Kicks against a Muay Thai Fighter from Wong Kiew Kit on Vimeo.