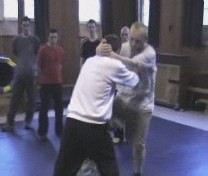 Muay Thai fighters frequently use knee attacks at close quarters, often with their hands around their opponent's head, pulling it down as they jerk up their knees. This video shows Sifu Kai Uwe and Sifu Darryl Collett, both well trained in Muay Thai too, demonstrating to participants of a Warrior Project training session a basic counter to such knee attacks.

This counter pattern, found in both Shaolin Kungfu and Taijiquan, is known as “Double Bows Tame Tiger”. A good stance and powerful “bridges” (arms) are necessary for an effective application of this pattern. Take note that the kungfu exponent does not block the knee strike, but deflect it. He should also take care that the opponent does not release the grip on his head to strike his eyes. If that happens, the exponent can brush away the eye attack with his upper hand.