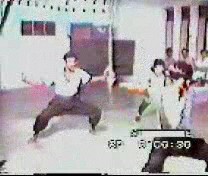 “Cross-Roads at Four Gates” was the fundamental kungfu set practiced at the southern Shaolin Temple in China about 150 years ago at the time it was razed to ground by the Qing Army. This set is not spectacular to watch but extremely beautiful and subtle in its combat application, and can be appreciated at different levels by exponents of different developmental stages. This video taken more than 20 years ago shows students of Sifu Wong performing the “Four Gates” as part of a promotion test. The three practitioners shown in the video, from left to right, are Mogan, Chee Kong and Kok San.

Please click the picture or caption below to view the video