USING KICKS AGAINST A BOXER 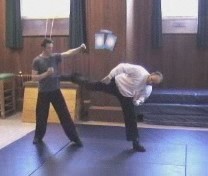 Besides intercepting and counter-striking a boxer as shown in an earlier video, another effective way to fight against a boxer is to use kicks, especially side-kicks. Interestingly, you can almost use side-kick against a boxer irrespective of what moves he makes. Frequently the boxer may not know what to do besides bouncing away, because he has never been trained to counter kicks, as kicks are forbidden in boxing rules. You reverse a doubly disadvantageous position had you fight like a boxer following his example, to a doubly advantageous position, apply the tactics of “long against short”, and “using your strong point against the opponent's weakness”.

Using Kicks against Boxers from Wong Kiew Kit on Vimeo.