FROM YOU WEI TO WU WEI, FROM CONTROL TO SPONTANEITY 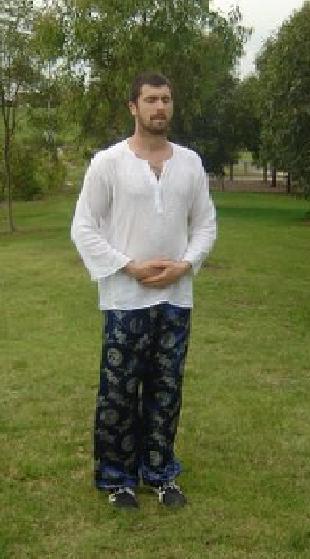 Jeffrey performing Dan Tain Breathing, or Breathing with the Cosmos. According to the methodology used in Shaolin Wahnam, to breathe with the Cosmos one proceeds from “you wei” to “wu wei” or from control to spontaneity. You can also read about “from you wei to wu wei” in Anthony's post found here.

The following discussion by Jeffrey Segal is reproduced from the thread Breathing Methods and Control in Taijiquan in the Shaolin Wahnam Discussion Forum on 11th January 2005.

A few weeks ago while practicing “Lifting Water” my arms dissolved and all I was left was a field of energy that had no boundaries.

I continued training, then standing still for some time. This feeling of incredible joy arouse up through me filling every cell of my body from head to toe.

That was grand. I finished up, went to bed some time later and was thinking of my experience I just had earlier, when the joyous feeling started again, this time it was far more intense. I thought my body was going to explode. Eventually the feeling settled and I was left with a sense of deep inner peace and a freshness that is still with me.

The next day the same thing happened while looking out the window at passing clouds. Everything in nature that I give time to causes this feeling in me, it is as if I can feel a connection under the physical form. When this happens I am not aware of any thoughts, just that wonderful feeling.

My "trouble", if you could call it trouble, is that my training does not feel as intense as it used to be before this happened. I train twice a day from twenty minutes to maybe one hour at the most (Tai Chi Chuan) Any advise would be great.

Sorry, I missed Spain. Smile from the heart and let the chi flow.

I think that your post will resonate with many of our members. It's clear to me that your words come from genuine personal experience (just as it is sometimes clear when people are merely reproducing what they have read in books or heard from others). Congratulations on your wonderful attainment.

It may seem to you now that you are not progressing or that the amazing progress you have made has somehow been lost. Fear not, all is well! The best thing you can do is just keep training and enjoy your training without trying to reproduce the spectacular effects of a couple of weeks ago. You can be grateful for the experience and take it as confirmation that you are on the right track but please don't become attached to it (I'm not saying that you are attached, this is just some general advice).

It sounds to me like your training is going well, very well. Don't be disappointed if it seems less intense than before. Perhaps you have just become accustomed to a higher energetic state and what seems like less now is actually more than before!

You Wei to Wu Wei

John's post is timely because it serves as a very good example of the benefits of realization in Taijiquan training. John's attainment comes not from actively visualizing the energy flowing through his arms and hands or indeed that his whole body is nothing but energy. Rather it comes from training in a Qigong state of mind (with all that entails) and enjoying his training. I would point out that in his case it also comes from regular training.

In Wahnam Taijiquan as in Shaolin Cosmos Qigong we use the term visualization but in practice it is more like “gently thinking of”. The progression between visualization and realization and back is very fluid. It's a fascinating aspect of training.

Sometimes “gently thinking” of an energetic process gives us the chance to realize and notice something that is already taking place. On other occasions, this “gentle thinking” can set the process in motion. Going from visualization to realization or spontaneity can be described in Chinese as going from you wei to wu wei.

When I originally learnt Abdominal Breathing in 2000, Sifu taught us using a very subtle process of visualization. While performing the exercise, every now and then we would gently think of negative energy being released on the out breath and positive energy being taken in on the in breath (visualization). The rest of the time we simply enjoyed the process that had been set in motion by the gentle visualization (spontaneity).

Another application of going from you wei to wu wei can be seen in the training of breathing structures as described by Sifu:

A very interesting aspect of Sifu's teaching of late is that he is able to guide students towards attaining advanced breathing methods such as Dantian breathing without using visualization. I have attended numerous courses where many (if not all) of those attending have been able to tap cosmic energy into their Dantian without any visualizing whatsoever.

Do nothing and everything will be done for you! 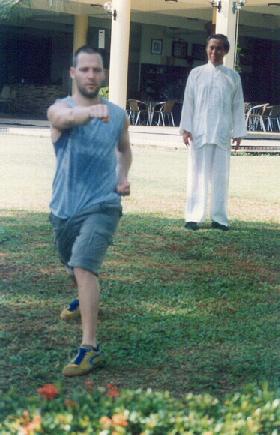 Roland performing the pattern “Black Tiger Steals Heart” in the kungfu set “Lohan Asks the Way”, with Sifu Wong looking on from behind. By regulating his breathing correctly, the secrets of which Jeffrey kindly share in these posts, one may perform the whole set elegantly and with force in just four breathes. Roland, who is known for his long, deep breathing, may perform the set in two breaths.

Yet here is another example of the use of one's breath within “Lohan Asks The Way” -- you could think that no one trains anything else! Such a simple set bringing about such incredible experiences.

At the November Intensive Kungfu Course, we were training this set and learning the various timings of the breathing as well as the progressions (one pattern per breath, 4 patterns per breath etc).

After we had completed the first “right”, Sifu then asked us to do the next side in one breath, then “swallow” after the last pattern with an “out” on each Precious Duck and Black Tiger (2 strikes per side).

With an amusing misunderstanding, I did "left", then turned 180 degrees and did "left" again, then ended with "swallow". I found myself facing everyone else, laughed and turned back 180 degrees. Interestingly, I had used the same length of time to do the sixteen patterns as it took everyone else to do the eight -- not by rushing, but by simply following my own breath (not the same as "follow" .. but kind of ).

My overall point covers two previous topics from this thread. Firstly, it shows that systematic training can bring about great benefits in regards to "natural" breathing (16 patterns in one breath, no panting or loss of breath and still calm enough to carry on unfazed) and secondly, it shows that once these skills are completely (or even partially) ingrained, it requires no effort or thought to bring them into practical usage.