HOW NOT TO BE OUT OF BREATH AFTER HOURS OF SPARRING 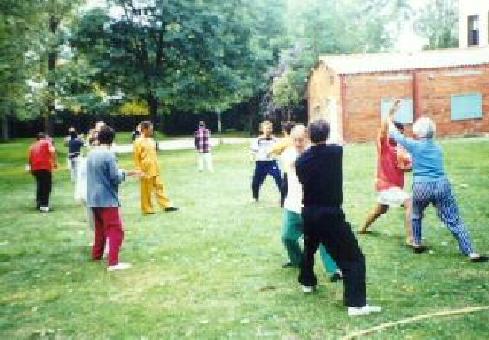 Sifu Wong's students may spar for hours at Taijiquan and Shaolin Kungfu courses, yet not of breath. The secret is breath control.

The following discussion by Jeffrey Segal is reproduced from the thread Breathing Methods and Control in Taijiquan in the Shaolin Wahnam Discussion Forum on 2nd January 2005.

Let's now return to the topic of this thread and examine the use of various breathing techniques in Taijiquan practice.

In Wahnam Taijiquan, feeling energized after training is not only the domain of the expert practitioner. From the very first session we aim to have more energy at the completion of a session than at its commencement. Right from the start we train our Taijiquan as Qigong.

As Sifu explained in one of his recent Q-A series, we perform the patterns in a solo Taijiquan set or in sparring or fighting as Qigong just like we perform other patterns like "Lifting the Sky" and "Carrying the Moon". As a result, we have better energy flow and bigger energy volume.

The spontaneous breathing of an advanced practitioner is by no means the same as the spontaneous breathing of an untrained person. When somebody who is untrained breathes spontaneously they merely breathe in and out, influenced by the nature and speed of their movements. Under normal circumstances they breathe about 15 times per minute. When performing movements that are vigorous and fast, however, their breathing rate may increase to 30 or even 60 or more times per minute. In this way they become out of breath.

When an advanced practitioner of Wahnam Taijiquan breathes spontaneously whether it is in solo set practice, sparring or actual fighting, they use a wide variety of breathing techniques according to the requirements of the situation. They are not bound by simple in-out breathing.

An easy way of illustrating this principle is to remember that just as a single Taijiquan pattern, like Grasping Sparrow's Tail contains many physical techniques (there are at least five hand techniques besides other body, leg, essence, energy and mind techniques), one breathing cycle can contain many breathing techniques. In a previous post I talked about some of these breathing techniques like “Follow” and “Swallow”. I also gave some simple examples of breathing structures.

Apart from not being bound to using one breath per technique, the breathing of a practitioner of Wahnam Taijiquan is much deeper and longer than that of an untrained person. An advanced practitioner breathes between 3 and 6 times per minute (though when needed, breathing can be quick and short).

This deep, long rate of breathing is maintained even when the movements become fast and vigorous in sparring or certain sections of our Taijiquan sets. This is one of the main reasons that we do not become out of breath even after sparring for hours, like for example, at Sifu's intensive courses in Taijiquan or Shaolinquan. Andrew mentioned in an earlier post that all those who have attended one of these courses can attest to this fact.

Another important reason that it is possible to feel energized rather than tired after training Taijiquan is that when training correctly, energy is added to and stored at the dantian using “Swallow” to complete the breathing structure. Through systematic training, an advanced practitioner will be storing Qi at her dantian with every breath.

So, it is a combination of deep, slow breathing and the constant storage of energy at the dantian that makes us feel energized rather than tired after our Taijiquan training.

It is relevant and important to remember that in discussing breathing in Taijiquan we are talking about far more than an exchange of air between the lungs and the atmosphere. I'm sure that some of our resident Qigong scholars know that the Chinese were referring to Qi in terms of energy a long time before the existence of air had been “discovered”.

Also of relevance and importance is that a pre-requisite for training Taijiquan as Qigong is being able to enter and remain in a Qigong state of mind.

Relax, Smile from the Heart and enjoy your training,