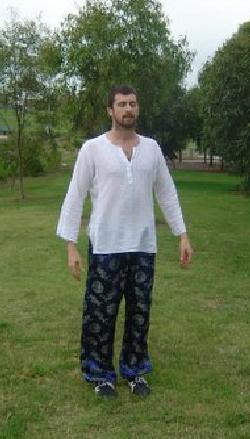 The following discussion by Jeffrey Segal is reproduced from the thread Breathing Methods and Control in Taijiquan in the Shaolin Wahnam Discussion Forum on 23 rd December 2004.

Originally posted by Sifu Stier:
"You make a good point about allowing the chi to flow where and how it needs to within the body during a Tai-Chi Chuan Forms Set. The same holds true regarding regulation of the breath during set practice, when it is best to naturally allow the speed and depth of the breath, as well as the speed and strength of the heart rate, to synchronize with the speed and rhythm of the movement pattern. Practicing a full routine of the exercises in this way, without any deliberate mental control, enables these normally autonomous physiological functions to adjust themselves naturally for maximum efficiency and benefit."

Taijiquan is indeed a wonderful internal martial art. When I first read the above passage, I thought that despite some slight differences I agreed happily and wholeheartedly, especially with the importance of learning advanced skills from a competent and experienced master.

However, when I was in Malaysia with Sifu recently I had an amazing opportunity to advance further, and directly experienced some of the wonders of Taijiquan. As usual, especially with advanced students, besides teaching us skills and techniques, Sifu Wong also explained the underlying philosophy. Anyone who has had the honour and pleasure of drinking tea or sharing a meal with Sifu will know that in Shaolin Wahnam, it is a tradition that some of the best lessons are taught in informal settings. Sifu has often told us that Ho Sigung also used discussions over tea as a powerful teaching method.

What I have learnt and directly experienced caused me to ponder over the advice given by Sifu Stier in the above and other relevant passages. At first I was puzzled as my learning and experience contrasted not slightly but actually quite drastically with Sifu Stier's advice.

Then it struck me how lucky I am, or perhaps we the readers of this forum are, as this gives us a rare opportunity to compare and contrast the teachings of two grandmasters on the same topics. It also struck me how wonderful Taijiquan is - as one advances in its cultivation, concepts that initially seem true can change or blossom into other possibilities.

I still have much to learn and experience in Taijiquan, but I believe that what I have learnt and experienced during the 5 or so years that I have been training under Sifu Wong is sufficient for me, at least for the purpose at hand, to present our Shaolin Wahnam views on "Breathing Techniques and Control in Taijiquan". I would welcome Sifu Stier and other experts, as well as my Shaolin Wahnam brothers and sisters, to correct me if I am wrong. But I would like to express right at the start that whoever gives advice or comments in this thread must not expect others to accept them without question or debate, but it should be carried out in a friendly and courteous manner.

Re-reading the long paragraph above, it seems to say that by following natural breathing a Taijiquan practitioner will get maximum efficiency and benefit.

This was quite true when I first learned Taijiquan from Sifu Wong. In fact we did not start with any Taijiquan sets or even patterns. We started with "Entering Tao".

But he made sure we were standing upright and that we were totally relaxed. Soon some of us started to sway "involuntarily". Sifu encouraged us to let go and "go with the Tao".

I remember him saying, "Taiji originates from Wuji, and this is what we are experiencing now." That was a most memorable experience. I felt free, joyful and also energized.

This was my very first lesson from Sifu and I can still remember being amazed. I had been meditating for several years and was a dedicated yoga student and ex-karateka but I had never felt anything like it.

For a couple of months prior to the course I had been training from Sifu's books and thought that I was doing rather well, having felt various qi sensations in my arms and body. Comparing a thimble of water with the mighty ocean would not be an exaggeration of the difference between learning on my own and being initiated by a genuine master. Ah, Camponuevo!! (That's where the course was held in Spain)

That was at the beginning stage. But at more advanced stages, the advice that by following natural breathing a Taijiquan practitioner will get maximum efficiency and benefit, no longer holds true. As a student progresses in Wahnam Taijiquan, various methods of breathing as well as mind control are employed. This means that if he just uses natural breathing in his Taijiquan training, he will not get maximum efficiency and benefit.

It may be helpful to point out that in our school, Shaolin Wahnam, Taijiquan is performed at three levels:

This classification is for convenience. In actual practice, there is much overlapping. I'm sure that some of our astute members will notice that we have here another manifestation of Jing, Qi and Shen.

I seem to remember Wuji mentioning that Sifu gave him a taste of performing Taijiquan at the mind level during one of his visits to Malaysia. Perhaps he or any other students of the Shaolin Wahnam Institute would care to describe their experiences using the mind to direct energy, which in turn leads forms. 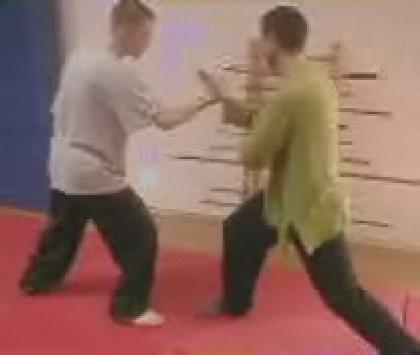 Jeffrey practicing Pushing Hands with Bern in Germany. With proper breath control in Pushing Hands, one can not only sense the opponent�s movements correctly but also generate substantial internal force.

Comments from Other Members of the Discussion Forum

"The advanced level, which is the mind level, where the mind directs energy, and energy leads forms." Jeffrey.

I have experienced this on different levels

Thank you Zhang Wuji for starting this thread, and to Jeffrey and everyone else for the excellent posts.

I have one question though. I was told that I shouldn't worry about my breathing now since I'm a beginner. But because of the fact that I have been doing Chi Kung for a while, I'm used to having to breathe in and breathe out depending on my movement. So now when doing my Tai Chi form, I notice that I breathe in and breathr out depending on my movement. What I mean by this is that my breathing is not forced in any way but it is following a certain pattern. It comes naturally to me. Hope this makes sense.

Should I worry about this or just leave my breathing the way it is now? One thing I know though is that I feel good and energized after doing the forms.

How are you doing? You sound well.

Originally posted by Jeffrey:
"Perhaps he or any other students of the Shaolin Wahnam Institute would care to describe their experiences using the mind to direct energy, which in turn leads forms."

When Sifu came to Cape Town in July, he was kind enough to take all the Taijiquan students aside (after a long day of teaching us Chi Kung and others Kung Fu), and give us a little class. Just half an hour of Sifu's Taijiquan teaching made a big difference to my training.

Earlier in the day Sifu told me to think of some Taijiquan applications I would like to learn, and I was honoured to have Sifu demonstrate the applications of "White Crane Spreads Wings" as well as "Brush Knee" and "Bending the Bow" (not sure on that last name) .

After that Sifu taught us how to transfer the skills we had learnt in his Chi Kung classes (like using the mind to direct energy to lead forms), to our Taijiquan form practice. We were told to stand with our feet together and to go into a Chi Kung state of mind. Then, we allowed the Chi to move around making us sway gently. We were then instructed to go from that flow into our Taiji Forms. It was amazing, it was like my Taijiquan was transformed. Thank you Sifu!