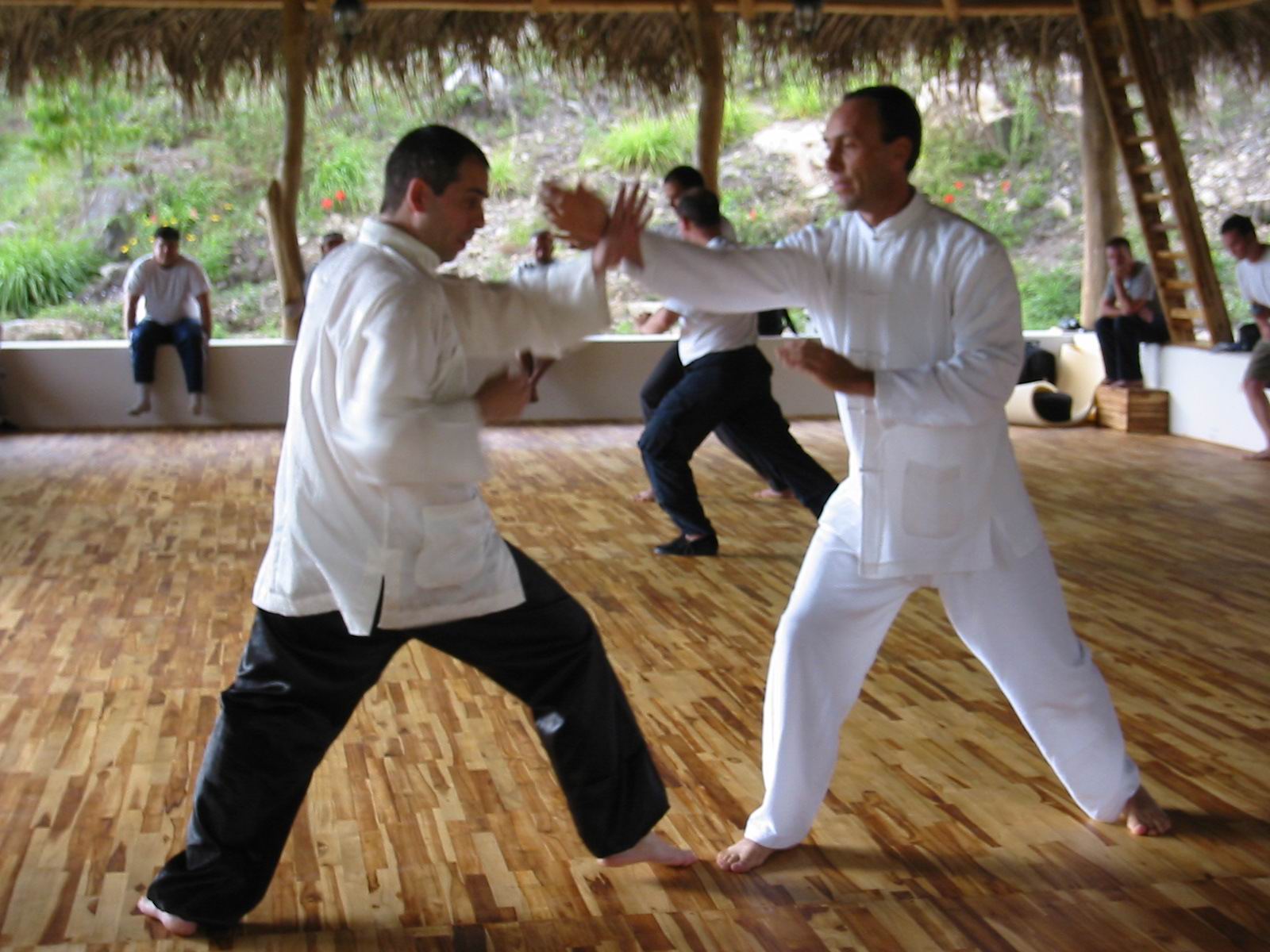 Jorge and Rama sparring at the Shaolin Wahnam Centre in Costa Rica. Both are Wahnam Taijiquan instructors. Although their sparring was vigorous they were not out of breath because they had good breath control.

The following discussion by Jeffrey Segal is reproduced from the thread Breathing Methods and Control in Taijiquan in the Shaolin Wahnam Discussion Forum on 2nd and 3rd January 2005.

I'd like to continue our discussion of breathing and control in Taijiquan by focusing a little on the control element of our discussion.


"I have also heard that in combat, the Taijiquan exponent uses the energy of the opponent for his own benefit, much like what you have described. He therefore borrows or steals the foe's qi away." Wuji.


It is indeed true that in combat we make use of our opponent's energy. We do not (as some people might think) wish to absorb the qi of our opponents, especially if they are aggressive and brutal. From our perspective it is not advisable to take on somebody else's "negative" energy. When we talk about using our opponent's energy it is in terms of using his momentum, techniques, force and intention etc.

If, for example, an opponent grips my arm and pulls me towards him, instead of pulling back, I follow his energy by moving forward and, using a circular movement of my arm I release his grip and strike him with the side of my palm using the "peng" technique from "Grasping Sparrow's Tail".

Or, let's say that a massive opponent pushes me backwards. Rather than resisting, I would use his energy by stepping back a step and, sweeping my hand using the "swing" technique from "Single Whip", I would fell him forwards.

There are many other examples of this principle in Taijiquan. Would anyone care to share some of their own experiences in using their opponent's energy?

The Value of Direct Experience

Originally posted by Sifu Stier:
"You presented an excellent description of the 'external' applications of the Tai-Chi-Chuan Form Postures you employed in your examples, but made no mention of how the breath is employed in these applications, or not employed specifically, and in either case, why? What part does the breath play, if any in your opinion, in contributing to the efficiency of the techniques? Please elaborate on the 'unseen' part of these applications, using the same two Form examples, if you would. Thank you!"

It's interesting that you only see "external" applications in my description. It is my humble opinion that anyone who has tried these techniques using Taijiquan knows that the 3 internal harmonies (Jing, Qi and Shen) are just as important to their successful application as the 3 external harmonies (Legs, Body and Arms). Also, an essential pre-requisite for their use is having cultivated sufficient internal force and being able to manifest it as required. It reminded me of what Sifu often says:

Similarly, a practitioner who has experience effectively applying the Taijiquan techniques that I described in sparring or fighting would not ask how the breath is employed in these applications, or not employed specifically, and why. They would simply execute the techniques as well as all other aspects of combat, including breathing methods and control, spontaneously. There is no time to consider which physical or breathing techniques to use, instead of responding spontaneously and correctly. 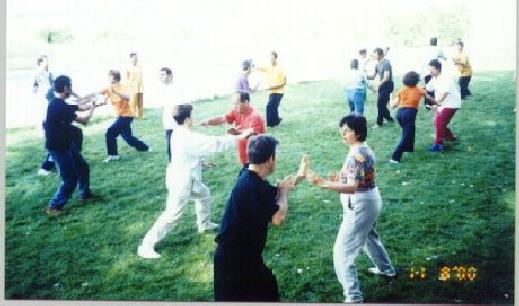 Beginning students at Sifu Wong's Taijiquan course in Camponervo, Spain in 2000 practicing combat application. They were not out of breath because of effective breath control.

It is of course useful to explain the breathing involved in the examples I gave earlier. It is, however, important to realize the philosophical explanation comes after direct experience and not before. I don't think it can be overly stressed how essential direct experience is in internal arts. That's why it is those practitioners who train regularly who gain the most from Sifu's books, websites and even this discussion forum.

A skillful practitioner has many breathing techniques at her disposal. There are many different possibilities for the two applications in question so I'll mention just a few.

If either application occurs in isolation, i.e. if your opponent suddenly grips your arm or suddenly pushes you, you could breathe "in" as you follow your opponent's energy and "out" while performing Peng or using the Sweep to fell your opponent. At the conclusion, remember to gently "swallow" your qi to the Dantian.

All this must be accomplished in a split second using Reverse Breathing, Abdominal Breathing, Small Universe Breathing or other breathing modes. An obvious variation would be using "explode" instead of "out".

However, if these applications are part of a longer combat sequence, you would use different breathing structures. You may use "follow" for the application (again in both examples), and conclude with "in" if you wish to continue with the combat sequence, or "swallow" if that ends the sequence.

I would still love to hear about any of our members' experiences using their opponent's energy.

In my few experiences in Tai Chi Chuan I did my normal Shaolinquan breathing. This means I didn't learn any specific breathing methods to practice, for example, Sticking or Pushing Hands, which is for me the practical aspect of Taijiquan.

Breathing in a nature way is for me also a control over the breathing because everybody knows it is not easy to stay relaxed in breathing in a confrontation, even it is only "Pushing Hands" or a hot discussion. Mind is connected to breathing.

Small Universe or Dantian Breathing has to be second nature to you before you can use it in combat, i.e. partner exercises or partner forms. In my point of view you have to learn it before you try to use it in Taijiquan and Shaolinquan.. If it has become second nature to you, then you don't have to think about it anymore during any activities (work Taijiquan, reading, writing etc.)

Breathing awareness during what your are doing will help you stay with your natural breathing or baby breathing.

Once I made an experiment. I put my palm against a sandbag (80kg). I used different kinds of breathing during my palm strikes and at the end the most powerful strike was made during my so called normal or natural breathing. It is only my experiment. May be some others have different results.