This article on “Miscellaneous Techniques of Tiger-Crane Set” is the third of the series. The sentence structure in this English translation follows that in the original Chinese version.

Miscellaneous Techniques of the Tiger-Crane Set In the previous two issues, the principles as well as the combat sequences of the Tiger-Crane Set were explained. The Tiger-Crane Set has both “hard” and “soft” dimensions, and the famous “No-Shadow Kicks” of Shaolin. Students should understand the principles and application of the set. Having learnt the patterns of the set, students should practice its combat application, and understand its variations. Weng Tuck, grabs Sifu Wong from behind with both arms. For example, if an opponent grabs you from behind with two hands, as in the illustration above, how would you meet this combat situation?

The pattern “Flying Bird Flaps Wings” from the Tiger-Crane Set can be used to counter this attack. The photographs illustrate these miscellaneous techniques. 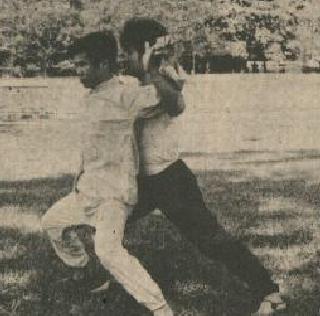 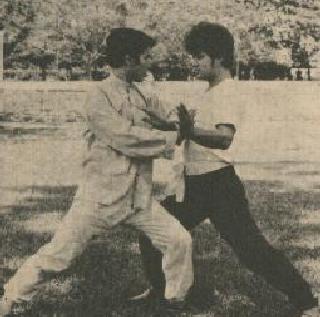 It is hoped that students will understand this point, and prevent the essence of the Chinese martial art degenerating into flowery fists and embroidery kicks. Kungfu practitioners must take up this responsibility and promote the essence of the art. Wong Weng Tuck executes a side kick at Sifu Wong. Sifu Wong moves a small step to his right and lock the kicking leg with the pattern “Tiger Leans Against Wooden Door”. 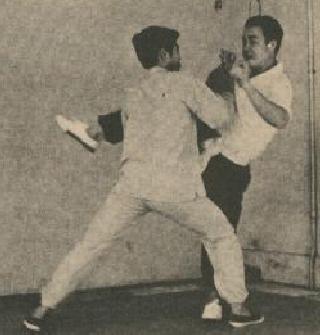 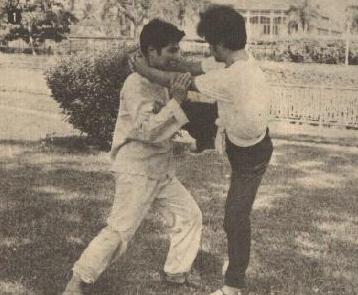 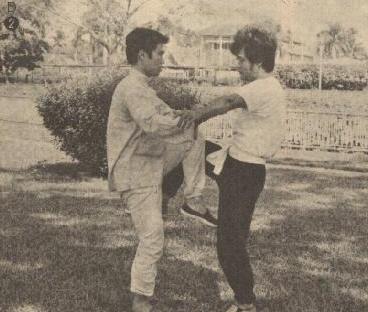 In practicing miscellaneous techniques and combat sequences, it is not true that there must be two persons practicing; it is also possible for a single person to practice alone. When practicing alone, imagine an opponent in your mind. The objective is to perform the patterns with force, speed and fluidity, so that in real combat the patterns can be implemented naturally.

In the next issue I shall explain the methods of training the Tiger Claw of the Tiger-Crane Set.