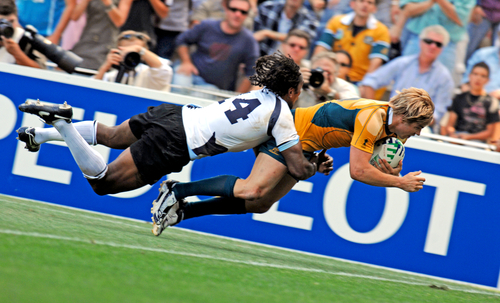 A flying tackle in ruby, photo taken from http://www.fitfighter.com/fitnessblog/

Soon the minister reached the erected platform. After some short introduction by local leaders, which no one seemed bother to listen, the minister rose to speak. The crowd suddenly became alive. There was continuous clapping and cheering everywhere.

By now Rahim had managed to push himself to the front among some journalists. The minister spoke eloquently, punctuated frequently by responsive applaud from the exuberant crowd. But Rahim was not listening to the minister's speech; he was observing the crowd for any possible assassination attempts.

A middle-aged man, dressed like a reporter, walked in with a huge, funny-looking camera. Where have I seen him before? Rahim thought. And why is he so late? But what interested Rahim most was his camera; it was unlike any he had seen before.

This reporter was now raising his camera to take a few shots of the minister. A thought flashed across Rahim's mind. And in a flash, he flung himself at the reporter, bringing him to the ground, camera and all.

The man struggled himself free, and ran for his life. Two men from the crowd chased after him. But some distance ahead, another man did a beautiful flying tackle, as if in a ruby match, and brought the running reporter firmly to the ground. This flying man was one of the lion dancers with bulging trousers.

The surprised reporter reached for his pocket, took out something and was about to put that something into his mouth when the other lion dancer also with bulging trousers stepped on his arm, took that something away, and hand-cuffed the reporter.

Nearby people were startled. A few other journalists did not miss the opportunity to snap photographs of this unexpected happening. Attention was diverted form the minister, but the skillful politician saved the situation readily by saying something like, "Don't worry about those few people fighting over an old camera. I'm going to tell you how our country can increase our trade and industries so that we can buy new, better cameras if we want."