I'LL BITE OFF YOUR NOSE 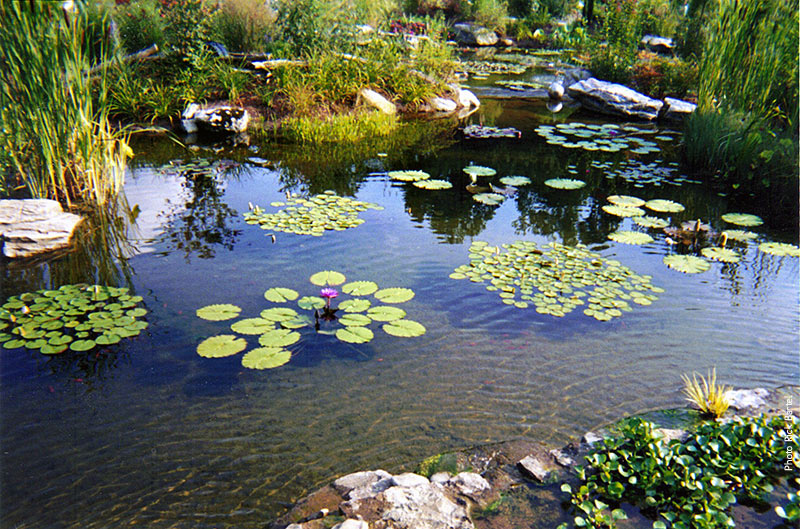 A lovely garden with fish ponds taken from http://www.pondclean.com/healthy-life-cycles-ponds/

What's wrong with sleeping with a girl, so long as she is willing and also finds it enjoyable, Yang wondered, as he raced silently towards Lin's house in Szechuan. After all, out of a hundred women, a hundred women secretly wish, at one time or another, to sleep with the man they love. The only trouble is that ninety nine women express this secret wish in their hearts, and only one woman expresses this in her eyes. And Lin Su Ching belongs to this rare type. Yang could not help smiling to himself.

For such a lovable woman, Yang continued to be amused, the best way to see her is at night through the back door. Yet her back door was equally exquisite. The backyard itself was a lovely garden, with an arbour, stone chairs and a stone table, fish ponds, low trees and well trimmed flower plants.

It was a moonlit night. The silvery moon was a gigantic, majestic, iridescent pearl in the sky, with myriad stars singing and dancing about her. The whole atmosphere seemed to be filled with soft, magical music from the heavenly spheres.

No one noticed Yang as he expertly scaled the wall of Lin's chamber. As he peeped in from a casement, he saw Lin Su Ching in her soft, luxurious bed, just like the last time he saw Fragrant Fox at Phoenix Avenue, except that this time she was not wearing any skin-mask, but having her complete night-dress on, flowing down her graceful, slender body like a pink cascade. Yang could not help admiring her. A young woman in her night-dress lying on bed is certainly very exciting to watch.

But in an instant Lin Su Ching jumped up, adroitly drew her sword with her left hand, and dashed to the window. Yang signaled just in time to prevent the gleaming sword landing on his head.

"Amorous Knight!" she exclaimed, "I almost mistook you for an amorous thief!" She helped him to climb quietly into her room.

"Sometimes a knight has to be a thief," Yang muttered, more to himself than to her.

"I don't care whether you are knight or thief; but I do care that you haven't come to see me for a long time." She reproached him fiercely. Then suddenly, dropping her head and blushing slightly, she whispered, "I have been thinking of you."

They were now sitting on her bed, holding hands. And the fragrant scent of magnolia was unmistakable.

"I missed you very much too." Yang was acutely aware of his own lie. Luckily, he thought to himself, I have not been ordained a monk: a monk always tells the truth. This is one of the very strike rules of the Buddhist ecclesiastical order.

He consoled himself that this was a white lie, meant to make another being happy, and meant nobody any harm; and he was grateful that luckily the Shaolin Laws did not touch on lies, whether white, grey, pink or of any colour. As he was never good at telling lies, he suspected that Lin Su Ching could have detected this lie, but she probably preferred to interpret it as something true.

"When did you return from Hangchow?" Yang quickly asked, expertly changing the topic of conversation.

"How do you know that I returned from Hangchow?" Lin was surprised.

Lin Su Ching could only murmured some inaudible syllables, for by now she was already lying blissfully in her bed with her eyes closed, her little mouth loosely open, her heart beating fast, probably soothed into a dreamy yet excitable state by Yang's artful caresses.

Yang's reputation as Romantic Knight was no empty title. For the next hour he demonstrated his mastery, and when he was ready and dressed up, Lin was still lying softly and limply on her bed, dreaming sweetly of the love she just had. Yang made sure that he was dressed first; he did not want a repetition of standing naked at the window watching Fragrant Fox escape.

Soon, Lin was dressed too, and was lazily combing her hair.

"You are not an Amorous Knight nor an Amorous Thief; you are an Amorous Horse!" she teased sweetly.

"And you are a Fragrant Fox."

In lightning speed, Yang's hand in a tiger-claw pattern was coming at Lin's face. She was completely taken by surprise, and for a moment she remained motionless, stunned. But Yang did not touch her face; he stopped just an inch away.

Instantaneously Lin recovered from her initial shock, and she lifted up her right hand to block, "threading" up her deceptively delicate-looking palm from below in an arc at his wrist, in a typical counter against such an attack. That was exactly what Yang had wanted; as soon as their wrists contacted, Yang pulled his right tiger-claw downward and backward, gripping Lin's arm, while his left tiger-claw snatched out.

Automatically Lin blocked in the same manner, and was similarly held. Now both her hands were held down in a crossed position by Yang. As he pulled gently, Lin fell helplessly onto his chest, and Yang embraced her warmly, with her hands still sandwiched between their bodies.

"Just what are you trying to do?" she yelled.

"Just trying to kiss your perfumed hair," he whispered into her ear.

"I'll bite off your nose!" she screamed.

"Please do, if only you can catch me." Saying this, Yang released his grip and sped out of the window with Lin in hot pursuit -- after his nose. And they created such a noise that the whole house woke up.