A FEAST FOR TRESPASSING 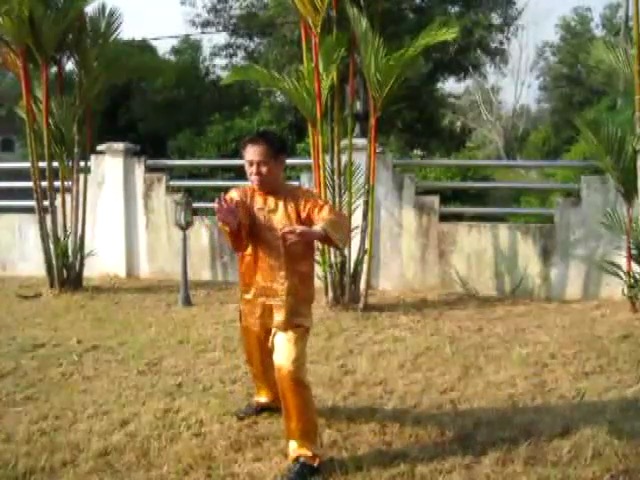 "Shaolin Brother," Liang addressed the masked man, as he placed his right fist to his left palm in front, in the traditional Shaolin greeting, "remove your mask."

"How do you know I'm also a Shaolin disciple?" the masked man asked as he returned the Shaolin fist-palm greeting.

"The three attacking movements you just executed are from the Second Application of the Shaolin Pa-Kua Set," Liang answered smilingly.

At Shaolin Monastery, all kungfu students started with a basic kungfu set known as "Cross-Roads at Four Gates", which was principally meant to train the students' forearm techniques and footwork, two important factors in combat. After this, the master chose one out of four Shaolin sets to teach the students, depending on the students' needs and abilities. The Shaolin Pa-Kua Set was one of these four sets, and was noted for its palm techniques and agile mobility.

"Brother Liang can remember the Shaolin patterns very well," said the man as he unmasked himself.

"Brother Yang! What are you up to?" Liang asked in disbelief.

"I know I shouldn't have done this, but I'm just so happy that I thought I might play a joke."

"A joke? You might be killed by mistake!" Liang retorted.

"I know true kungfu masters do not kill, unless absolutely necessary. Moreover you would like to catch the trespasser alive."

"I may understand what you would call a joke, but other people can't tell whether you are joking or really serious. You risk severe reprimand from the Prime Minister."

"My character and reputation can speak for me. And the Prime Minister will give me a feast, not reprimand."

"A feast for trespassing?"

"A feast for bringing back the jade-plum!"

"Yes, I'll give you a feast, and also three barrels of scarlet wine to wash it in," said Miss Hu as she walked towards them from her quarters.

"I'm sorry to have awakened you from sleep, Miss Hu," Yang apologized.

"It's worth to be awakened one hundred and twenty five times to hear my treasure recovered." Miss Hu could not hide her happiness.

"Please examine it carefully," Yang said, as he gingerly handed the jade-plum to her. "Fragrant Fox may have exchanged the genuine jade-plum with a dupe replica."

By now some guards had brought out lanterns. Miss Hu examined the jade-plum very prudently. Finally, with tears in her eyes, she said, "I'm really very grateful to you, Sifu Yang. My father has promised a reward of a thousand tahils of silver for the recovery of the jade-plum. The police, I believe, also award a thousand tahils for the capture of Fragrant Fox."

Then, turning to the others, she continued, "Gentlemen, it's almost dawn now. Please be my guests at breakfast. We'll have a feast, and I'm sure Sifu Yang, after having given you a false alarm, wouldn't mind sharing his Persian wine."

Yang certainly would not mind. After all, when men are happy, they drink in company; only when they are pensive, they gobble alone.