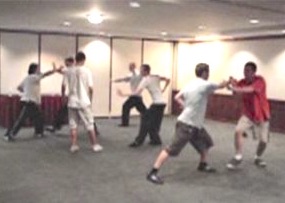 Dark night with no moon and no stars. Even the air seems to be still.

A dark, masked figure skillfully jumped over the walls of the Prime Minister's Residence. It was quiet inside. He moved swiftly like a wind past a garden into another garden.

"Where have the guards gone?" he wondered. He shimmered noiselessly past some living quarters and some pavilions into the third garden.

Just some distance away were Miss Hu's quarters. Just how easy! he thought. Incredibly easy.

Suddenly he felt something going to fall on him. It was a net! A huge net cast by someone just a few feet behind. Where does this someone, who appears like a ghost, come form? But the masked man had no time to think. The net was real and was going to envelope him in an instant. Instinctively the masked man dropped to the ground and rolled forward like a ball, escaping capture just by inches.

But as he was about to get up from the ground, he found himself pinched down by two powerful arms of another man who had just sped out noiselessly from a nearby bush. The masked man did not try to get up; to do so would be using force against force. Instead he rolled sideways onto his back, and using his legs and the momentum of his roll, he flinched his opponent into the air. But the flying man did not crash into a bed of rose plants as expected; he did a somersault in the air and landed noiselessly on his feet.

The masked man sprang up and was about to dash towards Miss Hu's quarters. Then he realized, to his amazement, that standing in front of him barring his way were at least thirty men. The intruder was spell-bound. Where have these guards come from? How could they appear so fast without making even a sound?