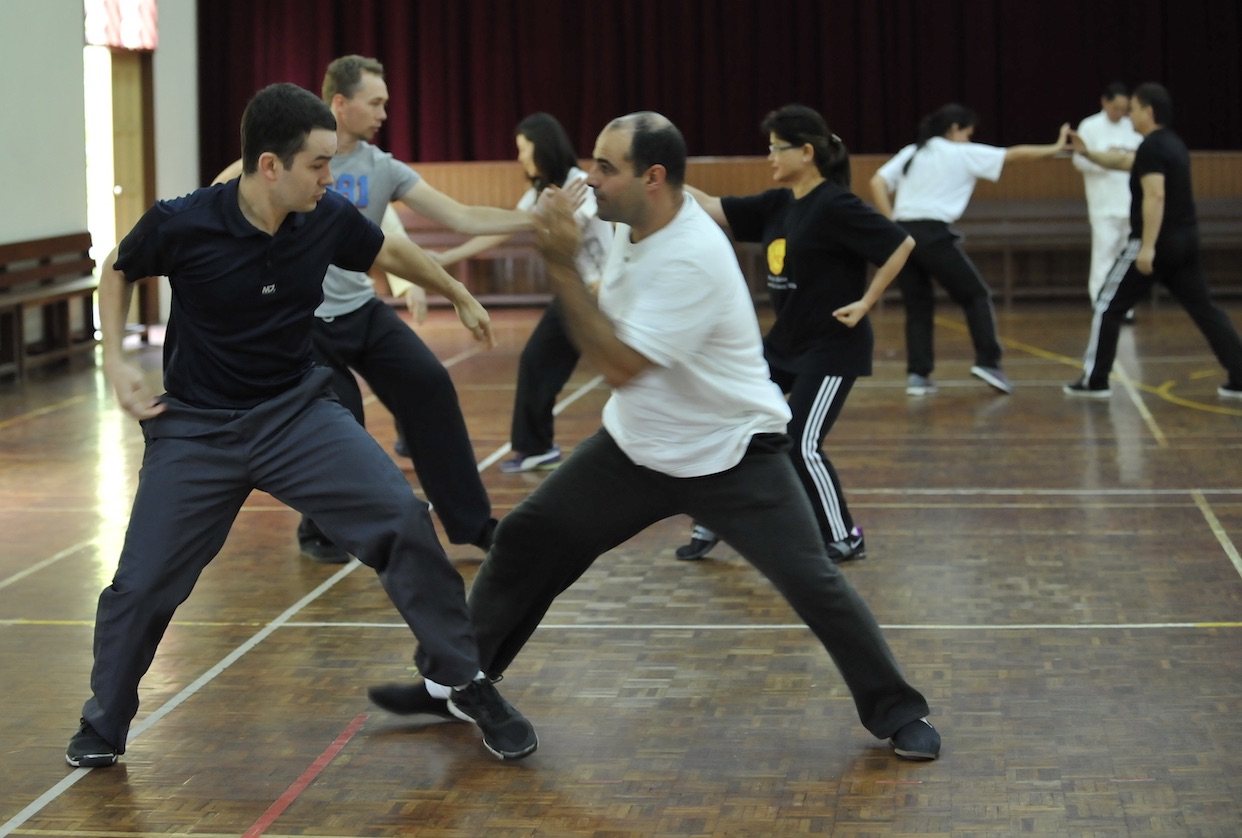 Once Shaolin masters were highly respected, but now the general public regards them as bullies who delight in hurting others. It is even less complimentary for those who know the secret, who regard Shaolin masters as those who demonstrate beautiful Shaolin forms to please spectators but who suffer silently due to sustained injuries if they ever spar with other martial artists.

There are two important areas where Shaolin masters or instructors neglect when they teach Shaolin Kungfu. They do not teach internal force and combat application.

At first internal force was kept secret, taught only to selected students who had proven their trustworthiness. Ordinary students could use Shaolin techniques for combat, otherwise it could not be called Shaolin Kungfu. But gradually both combat application and internal force are lost, with Shaolin practitioners performing beautiful forms as "flowery fists and embroidery kicks", and use other martial techniques or random fighting for combat if they ever have to spar.

The Intensive Shaolin Kungfu Course was first introduced in the early 2000s to help kungfu instructors overcome these two setbacks, which incidentally were the two hallmarks of great kungfu training. Kungfu instructors could learn in just a few days what they would not normally learn elsewhere.

The early Intensive Shaolin Kungfu Courses were meant for practicing instructors, or those with kungfu experience who aspired to become kungfu instructors. This was unprecedented in kungfu history. No sensible masters in the past would do this; they jealously preserved internal force training and advanced combat application for their selected students in their own schools. But I was willing to do so for the sake of preserving the greatness and glory of Shaolin Kungfu.

But none -- I repeat, none -- of any practicing instructors of other schools successfully attended my Intensive Shaolin Kungfu Course. (One came in the early years, but he had to leave halfway due to a genuine reason.) They did not believe they could learn internal force and combat application in a few days, or thought I was talking non-sense, or they were blindly loyal to their traditions, preferring to teach flowery fists and hurt themselves in sparring.

I went to the extent of saying they needed not mention they had learned from me, and they could teach whatever they found useful in their schools. As I have said elsewhere, I didn't want to cast pearls before swine. It was their problem if they did not want to attend my Intensive Shaolin Kungfu Course.

All those who attended my early Intensive Shaolin Kungfu Courses were our Shaolin Wahnam family members, for which I was actually happy. Many of them became our early kungfu instructors.

During the time of the early Intensive Shaolin Kungfu Courses, there were no videos. Even picture series were rare. Course participants had to learn the prescribed combat sequences by heart, and many of them had "brain-fried". It was around this time that I realized the Intensive Shaolin Kungfu Course was for leadership training. I pushed course participants to go beyond their physical, emotional, mental and spiritual limits so that they emerged as better persons in all aspects.

Later when videos became readily available, I posted the combat sequences on my website. Many people have reported that these combat sequences are fantastic. If they know them, they can handle any attack, which is true.

With course participants knowing the combat sequences before they attended the course, we had more time for other aspects of kungfu training. I introduced combat against other martial arts, like Karate, Taekwondo, Boxing, Kick-Boxing, Muay Thai and later Wrestling and Mixed Martial Arts.

This was not difficult if course participants were well trained in Shaolin Kungfu. As I have mentioned elsewhere, we regard martial artists of other styles as having poor forms but good skills. So we avoid their strong points, like power and speed in their attack, and focus on their weakness, which is poor form, like exposure and poor balance.

Nevertheless, it was useful to learn appropriate techniques against their frequent attacks. Against Taekwondo and Kick-Boxing opponents, for example, we avoid their kicks, and immediately move in to fell them onto the ground. Against Muay Thai opponents, we counter their formidable knee jabs, which kungfu practitioners and even masters often dread, and which was a legacy from my sifu, Sifu Ho Fatt Nam. Against Wrestling and Mixed Martial Arts opponents, we counter their shoots and pin-downs which they often use.

Applying a principle to many different situations is not new. We used this in the earliest of the Intensive Shaolin Kungfu Course. Instead of learning counters against myriad attacks, we learn their principles. Leaving aside finer points, once we know how to counter a middle level strike, like Black Tiger Steals Heart, we can counter any middle level strikes, irrespective of whether the striking point is a phoenix-eye fist, a tiger claw, or an open palm, and irrespective of their leg mode. Similarly, once we understand the principles of countering a kick, a felling technique, or a chin-na attack, we can counter any attacks.

Hence, in the latter of the Intensive Shaolin Kungfu Course, I taught counters against pin-downs and their basic principle. I also taught the three points of countering shoots -- at the start, in the process, and at their completion. But being compassionate, which is a value we cherish in our school, and also for fun, we also learn to counter pin-downs, if we fail to stop shoots at their start or in their process.

In the latter of the Intensive Shaolin Kungfu Course I taught the skill of "follow-through", which I did not teach in the earlier courses. When we were learning the combat sequences, a practitioner might stop for his partner to respond. At a latter stage when both knew the respective combat sequence, but when the partner was slow or hesitated, the practitioner followed through with the next pattern using the otherwise defence pattern to cover the partner. Or he might use an extra but appropriate pattern. At an advanced stage when the practitioner was so fluent with the combat sequence, he "followed-through", as the partner would be relatively slow irrespective of whether he hesitated.

This is evident in my latest video here, where their combat sequences consist of straight-forward punches. However, if the responders use techniques learned in our school, the sparring would be different, as is evident here.

If our students and some instructors wish to win in free sparring against other martial artists of similar performance level, they must put in time and effort in the following:

If they do not practice their combat sequence well, they will only know the philosophy as novelty. If they do not put it in their free sparring with other martial artists, they just throw their training out of a window.

Over-training, especially for those who have attended my intensive or regional courses, has become an important issue in our school. In the latest of my Intensive Shaolin Kungfu Course, I taught, not merely spoke about, operating at less than potential, like at 30%, when practicing. When learning new material, we can operate at our comfortable best.

Because the Intensive Shaolin Kungfu Course spreads over a few days, even when course participants operate at 30% all the time, they will still over-train. Over-training once a while is alright. Those who have over-trained in this way need not do anything special or extra. But over-training on a regular basis is detrimental.

The Intensive Shaolin Kungfu Course is wonderful. As Leo (Sifu Leonard Lackinger) has rightly said, it is one of my favorites. But due to my tight time-table, I can offer it only once a year, or sometimes twice. Not only it provides all the material a genuine kungfu master should know, but more significantly it enables you to be healthy, full of vitality, have longevity and peak performance, and make everyday your birthday. If you practice kungfu (any style), and have not attended one, you should not miss it. If you already have attended one or many, do it again to enhance your skills and increase your knowledge. 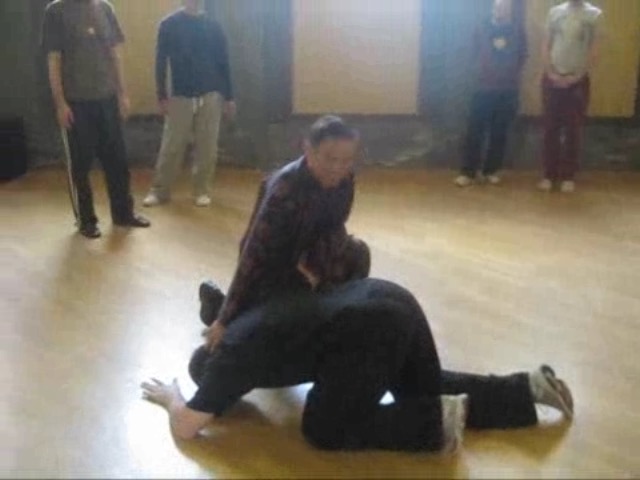 A counter against shoot