KUNGFU IS SUPERIOR TO OTHER MARTIAL ARTS IN COMBAT 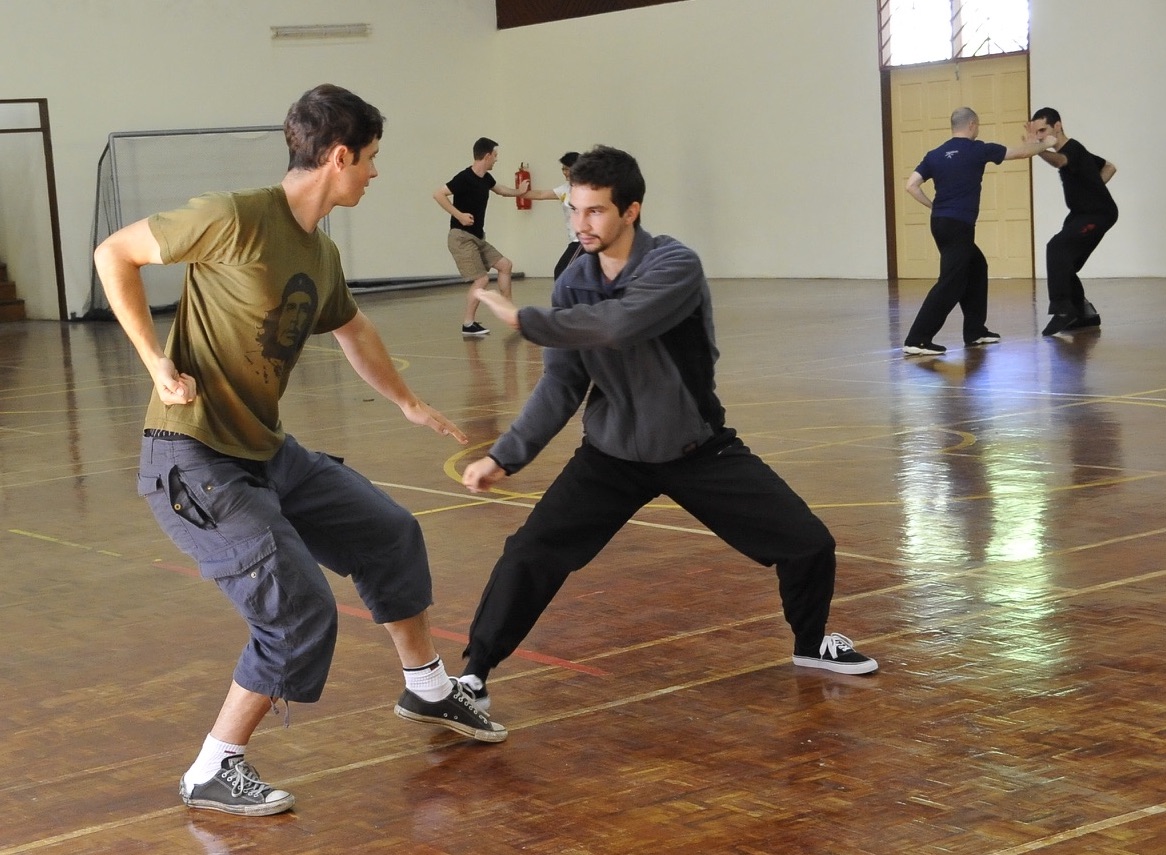 Suppose you drive a car and someone rides a bicycle. Except in special situations like when he is very skilful and you a beginner, or you have to go through a large crowd of people, you will arrive at your destination faster than him, and in a more comfortable manner. But if you do not know how to drive a car, though you may have one, the cyclist will arrive earlier.

This is a good analogy between kungfu and other martial arts in combat, although many people who only perform flowery fists and embroidery kicks, but not genuine kungfu, may not realise the analogy.

Both a car and a bicycle are vehicles for transportation. A car is certainly superior. It also needs more time to develop the skills to drive a car than to ride a bicycle.

Both kungfu and other martial arts are vehicles for combat. Kungfu is certainly superior, and its justification will be explained subsequently. If all other things were equal, it also needs more time to develop the skills to practice kungfu than other martial arts.

Actually, with a few exceptions like in Boxing and Muay Thai, many other martial artists also do not use their arts for fighting. They merely punch and kick wildly, in a generous exchange of blows. A karate student, for example, does not use his karate techniques. He fights randomly, taking hits for granted, which is directly contrary to his main aim in learning a martial art.

Why is kungfu superior to other martial arts? There are countless ways of answering this question, but to be comprehensive we may classify the answer into four categories — form, skills, application and philosophy.

It may be a matter of opinion, but many people find kungfu forms more aesthetic than other martial art forms. A demonstration of kungfu is beautiful to watch. Indeed many kungfu practitioners today, wrongly, have neglected the combat function of kungfu and focused only on demonstration This is exactly what wushu, which is the Chinese word for kungfu, has become today. A wushu champion is determined not by how well he can fight, but how beautiful his demonstration is.

It is worthwhile to know that the beautiful forms of kungfu are not for pleasing spectators. They are what they are, and in this case they happen to be beautiful, for combat purposes. In other words, a kungfu practitioner moves his hands, feet and body in a certain way because this particular way gives him the best advantages in combat. Because of its long history, the techniques, i.e. the ways kungfu practitioners move their hands, feet and body, have become so sophisticated that their combat function may not be obvious to many people.

It is skills, sometimes regarded as force, that kungfu outshines all other martial arts. Kungfu is the only training that develops internal force. While other martial artists break planks and their hands are rough after years of hard conditioning, kungfu practitioners break bricks and their hands remain gentle with internal force training. Other martial arts sustain injury when being hit, but a kungfu practitioner, if he has trained Golden Bell or Iron Shirt, can take punches and kicks without being injured.

Internal force is not just for combat. It gives us good health, vitality and longevity, and enriches our daily life. With internal force, we can have better result no matter what we do!

Yet, internal force, which gives us such incredible benefits, is only one of the many benefits of skill or force development in kungfu not available in other martial arts. Another invaluable benefit is mental clarity. While other martial artists become stressful and frequently intellectualise, in genuine kungfu training practitioners clear their mind of all thoughts, which by itself contribute to mental clarity.

A more everyday benefit is being relaxed. In other martial arts students become tensed in their training. In some martial arts, they grimace and attempt to look tough. In genuine kungfu training, students have to be relaxed. The more relaxed a kungfu practitioner is, the better will be his kungfu performance -- a fact many people, especially in Western societies, may find it had to comprehend. Because of his daily training in genuine kungfu, where practitioners have to be relaxed, they become relaxed habitually, which will enhance their daily life.

It is in kungfu application for combat that this article is specially written, and which many kungfu practitioners may be interested. If your opponent in sparring is of similar skills and experience, using kungfu gives you a far better chance of beating him than using any other martial art or fighting randomly. The reasons are straight-forward. Kungfu is far superior in fighting than any other martial art or fighting randomly, because it has superior skills and techniques. In the same way, if you drive a car you will arrive faster, and also more comfortably, than someone riding a bicycle.

But in practice most kungfu practitioners are defeated by other martial artists in free sparring. Why is this so, when kungfu is a superior art? The answer is straight-forward, though many people may not realise it or refuse to realise it. The defeated kungfu practitioners do not know how to use their kungfu for combat. It is like having a car but do not know how to drive.

Many other martial artists also do not use their arts for fighting. But they have sparring experience, and are ready to take punishment in the form of punches and kicks. So they attack their opponents ferociously, often frightening kungfu practitioners who only perform flowery fists and embroidery kicks.

But if you cover them adequately, making it difficult if not impossible for them to attack you, and apply your kungfu techniques on them, they often do not know what to do. If you apply sophisticated kungfu techniques against which they have no defence techniques in their martial art repertoire, they will be helpless. For example, if you kick a Boxer, fell a Taekwondo exponent, or apply chin-na on a Karate practitioner, they have no techniques in their arts to counter you! Their response is to move away. Chase them, taking care to cover them adequately, and they will be pressed helplessly against a wall.

To attain this scenario, which will surely happen as a matter of course, you need the following skills:

As a matter of fact, you may not have this scenario if you do not cover your opponent adequately, if you let him move away from your striking distance, and if you do not attack him fluently in a pressing manner.

Of course, you need to spend some time to acquire the skills, not merely read about them. If you are not willing to put in some effort, you will always be defeated by other martial artists even when you have the rare opportunity to learn what many people describe as the best martial art in the world from the best teachers.

The Kungfu Course at the UK Summer Camp 2016 is an opportunity to acquire these skills. An objective of the course is to enable course participants to win free sparring against other martial artists after the course, not merely know the theory.

But more important than combat is enriching our daily life. As a result of practicing the arts taught in our school, our students will enrich their daily life in every way! They are relaxed and happy, have a good philosophy of life, are kind and considerate to others, experience chi flow to promote good health, vitality and longevity, and have better mental clarity and more internal force for daily work and play. It sounds too good to be true, but it is true.

There are countless examples, but it suffices here to mention just one or two. In kungfu we do not perform individual patterns, but a sequence of patterns flowingly in one breath, known in Chinese (Cantonese) as “yiat hei hor seng”, which means “accomplished in one flow of energy”. In our daily life, we do not perform individual tasks in isolation, but all related tasks in one smooth flow. This principle has enabled me to accomplish many things faster and more effectively.

In kungfu performance, we pay attention to six harmonies, which refer to harmonies of feet, hands, body, elegance, energy and mind. Those who had attended my Intensive Shaolin Kungfu Course would have heard me saying, “Don’t perform Opium Smoker Reaching for Pipe. Perform Black Tiger Steals Heart”. Even if your form is correct, i.e. you have harmonies of feet, hands and body, but you lack elegance, or have no force, or is absent-minded, your Black Tiger Steals Heart would become Opium Smoker Reaching for Pipe.

The six harmonies are more important in our daily life. No matter what we do, even simple, prosaic everyday things, we perform their outward form correctly, i.e. we have harmonies of feet, hands and body, and we are elegant in action, energetic in purpose, and have presence of mind. Other martial arts may not give us these benefits. Kungfu is superior to other martial arts. 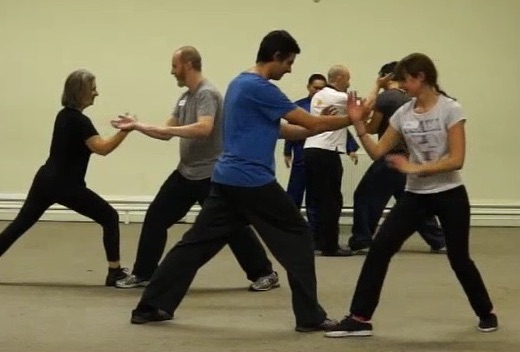 A Taijiquan course in Melbourne