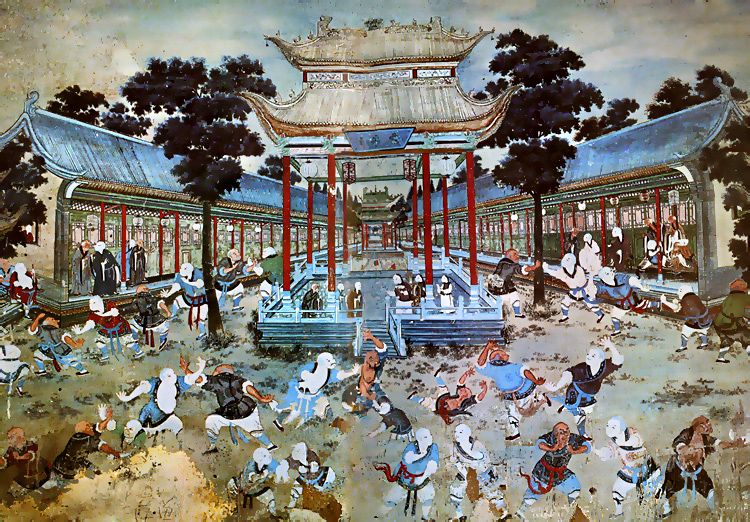 Cross Roads at Four Gates (Sap Tze Seai Moon Khuen) is a very special set in our Shaolin Wahnam school. While we are fortunate to have a Grandmaster who is an expert at composing sets (like our Dragon-Tiger set) and combining sets (like our Flower set), Cross Roads at Four Gates is one of the few sets we have that is passed down unchanged from the days when Shaolin monks practiced it as their first set at the southern Shaolin Temple. Its signature characteristic is "Profundity in Simplicity", as it is a set of great depth with something for beginner and master alike.

There is also a "song of secrets" about Cross Roads at Four Gates:

Shaolin Four Gates trains bridges and stances
Secrets are found in flowers in the sleeves
Block the Boss and Carry Insignia with punches
Phoenix Flap its Wings to rustle leaves
To Hit the Gong in unexpected slanting motion
To Seek the Organ, show the shadow hand
The marvel of Catching Tigers in the Mountains
Only from the master can students understand

Despite its rich Shaolin history, Cross Roads at Four Gates is not a well-known set.

Sifu Ng Yew Loong was Uncle Righteousness's Sifu, and thus Sifu's Sigung! It is both interesting and telling that Sifu's two most influential lineages to the southern Shaolin Temple both have Cross Roads at Four Gates.

Despite its short length, Cross Roads at Four Gates is a complete set, meaning that it contains ways to attack and defend the four categories of attack: hand strikes, kicks, felling, and chin-na. It also features patterns (like Catch Tiger in Mountain and Crouching Cannon to Sky) for attacking and defending from the ground. That said, it heavily emphasizes hand strikes. Indeed, a beginner may not see any obvious felling patterns when watching the solo set, and only one or two obvious chin-na patterns and kicks.

Variations over the Years

Cross Roads at Four Gates was much emphasized in Sifu Ho's school. Sifu Wong has said that his classmates there practiced it frequently and often used the first combat sequence as a starting point for sparring.

One thing you will notice if you watch through the above course videos is that there are some differences in how Cross Roads at Four Gates is taught across courses. This is because Sifu follows the advice he often gives us that we must keep our kung fu alive. When teaching a course, Sifu adapts the material and the way he teaches it to the students. The beginner might be confused that there isn't one Official Way of practicing Four Gates and its combination set. In contrast, the more experienced student appreciates the insights gained from exposure to different variations.

These variations apply mostly to the combination set. When teaching the solo set, Sifu sometimes replaces the first Fierce Tiger Across Valley with Precious Duck Swims Through Lotus, which highlights how effectively these patterns can be substituted for one another when it is advantageous to do so in combat (something the combination set also highlights). Otherwise, he teaches the solo set unchanged. The variations found in the combination set are more numerous, but not radical. Rather, they demonstrate how the patterns have different layers of applications from beginner to master level, such as applying the opening Hide Flower in Sleeves as an arm lock rather than a grip release or replacing the Reverse Hanging of Golden Lotus with Rising Dragon Galloping Tiger in the fourth sequence. Profundity in Simplicity!

Cross Roads at Four Gates has some special characteristics, namely:

Understanding these special characteristics leads to a greater appreciation of the set and a more effective practice with greater benefits.

Some Details on How to Use Just One Hand in Combat in Four Gates from Wong Kiew Kit on Vimeo.

In Four Gates, the right hand is the emperor hand and the left hand is the minister hand. There are twice as many patterns in the set that feature the right hand as there are the left. The right hand is almost always a fist, pressing forward with Fierce Tiger Across Valley and Precious Duck, countering with Bar the Big Boss and Hide Flower in Sleeves, and delivering a coup de grace Black Tiger Steals Heart or Lohan Strikes Bell. The left hand is almost always a palm, piercing between punches with Poisonous Snake Emerges from Pit, threading to set up a Black Tiger with Threading the Bridge at Bow-Arrow or Mirror Hand, and brushing away strikes and countering with Amitabha Palm.

Of course, either hand can be used to employ whichever pattern is best for the situation, but generally separating the roles of the hands this way has some benefits. Beginners develop combat proficiency faster because each hand only has to be able to do a few things well rather than many things well. Masters make use of the specialized roles to develop the high level tactic/skill "One hand to spar, one hand to drink tea".

This tactic/skill has its origins in the first sequence of the Four Gates combination set (and first section of the solo set) where the initiator executes Bar the Big Boss, then Guan Ping Carries the Insignia, then Precious Duck Swims Through Lotus to defend attacks from both of the responder's hands before delivering a coup de grace, all with his right hand. It can be expanded and systematically trained to incorporate defending and countering any attack, whether it be a hand strike, kick, felling attack, or chin-na. Not only is it fun to practice, developing the ability to use one hand to spar, one hand to drink tea has some real benefits:

Even though the name implies that the minister hand is not needed, in accordance with Safety First, it should still support the emperor hand if it can.

Waist rotation is strongly emphasized in most of our Shaolin Kung Fu, as is the gradual progression from large to small movements. Four Gates takes it a step further and features the skill of exploding force from dan tian without using waist rotation.

Beginners will generally find that they need to use more waist rotation until they develop sufficient internal force and clear the meridians. Masters, on the other hand, will produce devastating force from a small, explosive movement.

One way that Profundity in Simplicity manifests is in the solo and combination sets themselves. Watch the solo set. Doesn't it look short and simple? Watch the combination set. Are you surprised at how those same simple patterns can be effectively applied in sophisticated ways?

Take the innocuous-looking Catch Tiger in Mountain as an example. If you don't already know its applications (like in sequences 3 and 4 of the combination set), you might think it's a decorative pattern, or maybe that it's used to dodge a high kick. Would you believe that it is a combat-ending move so valued that it is specially mentioned in the song of secrets and included in the Essence of Shaolin set (the set composed of the best 108 patterns for combat in all of Shaolin Kung Fu)?

And what if I told you there are at least three different no-shadow kicks in the solo set? Profundity in Simplicity!

The sequences that comprise the combination set are quite advanced, but they encapsulate some simple, broadly-applicable tactics. Sequence 1 includes the following "mini-sequence":


This mini-sequence teaches how to safely press with and defend against alternating hand strikes. The responder employs the tactic of countering by closing the pressing strikes (i.e. brushing them across the initiator's body) to disrupt the initiator's rhythm and control the pace of combat. If he is advanced, he may execute his Mirror Hands as slicing palms that strike down the initiator just when he thinks he is about to land a strike himself. The initiator counters this by redirecting the momentum of the responder's Mirror Hands back around to close the responder's arm instead, creating an opening to continue his pressing attack.

The start of the second sequence employs a similar pressing attack with alternating hand strikes, but this time the responder counters by opening the strikes (i.e. pushing them away from the initiator's body):


Here, the initiator counters being opened by leaking his striking hand around the Mirror Hand to instead open the responder, creating an opening to continue his pressing attack. He could do the same after the Precious Duck and continue pressing with this mini-sequence over and over.

Between these two simple mini-sequences, you can develop the skill to safely press using alternating hand strikes using whichever patterns you prefer, regardless of how your opponent defends (and vice versa)! How's that for Profundity in Simplicity?

By now, I hope you appreciate the wondrous depth that can be found in this seemingly simple set. There is, however, another benefit of Four Gates that I haven't mentioned yet:

Reflecting on this experience, I realize how lucky we are that Sifu has evolved our training to be so cost-effective. Students absolutely gain combat proficiency faster starting with the 16 Basic Combat Sequences rather than Four Gates. When I think about Shaolin monks in the past starting with Four Gates (and going up from there!), I appreciate how incredibly high the standard of combat proficiency was in the past compared to today. At the same time, Four Gates really does have something for beginner and master alike. Even though in some respects it was above my students' level at the time they learned it, they benefited and progressed tremendously by practicing it.

The Profundity in Simplicity of Cross Roads at Four Gates is a manifestation of another Shaolin treasure: Zen. It's no wonder why it was practiced for so long at the southern Shaolin Temple and yet still brings wonderful benefits to students in the very different world of today. If you train well, maybe one day you will experience the benefits described in this article for yourself. And then you, too, will walk the same path and make the same realizations as your Shaolin ancestors did hundreds of years ago.