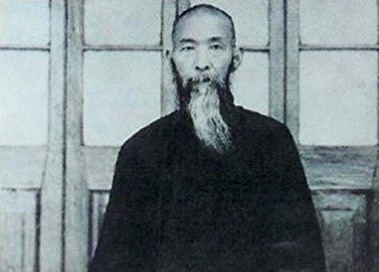 Even during Dong Hai Chuan's lifetime, Baguazhang underwent hundreds of permutations. Every student that Dong trained acquired their own facet of Dong's art and passed it to their students, who likewise evolved and modified the art to their personal needs.

Leaving aside the claims of some schools that profess to train the "original" Baguazhang that Dong is said to have learnt from Daoist masters affiliated with the Dragon Gate sect of the Wudang temple [22], several of Dong's students and grand-students were most especially well known for changing and systematizing what he had taught. Perhaps the most famous practitioner was Sun Lutang, a student of Cheng Ting Hua who arrived to Beijing already having had a foundation in the Xingyiquan practiced in Hebei province [1].

Sun Lutang trained in Xingyiquan during his youth before moving to Beijing, where he was exposed to a number of different martial arts masters. After learning Baguazhang from Cheng Ting Hua and later from Hao Weizhen, a teacher of Wu-Hao Taijiquan, Sun Lutang came to the personal realization that his Xingyiquan, Baguazhang, and Taijiquan shared certain principles, namely an emphasis on the cultivation and application of internal force rather than muscular strength, underlying body mechanics that emphasized the importance of solid rooting as well as light agility even with narrow stances, and the maintenance of fighting skill and health even in old age [1, 18].

While Sun Lutang was said to have used Baguazhang for the majority of his fighting career, he later transitioned to Wu-Hao Taijiquan for health and spiritual cultivation purposes and later merged the solid decisiveness of Xingyiquan, the agility and trickiness of Baguazhang, and the flowing characteristic of Taijiquan into a single style that his students called Sun style Taijiquan in his honor [17].

Because of Sun Lutang's knowledge of Chinese classical literature, besides possessing the rare skill of literacy amongst Baguazhang masters (who were, for the most part, illiterate due to humble social beginnings), Sun's writings and thoughts on Baguazhang as well as Xingyiquan and Taijiquan spread far and wide, becoming an established orthodox standard for much of the kung fu world.

Following Sun Lutang's example, many teachers even in the modern era who practice one of the so-called internal arts will often have a foundation or exposure to the other two [1, 2, 5, 6, 8, 9, 13, 17, 22]. Taiwan was a Mecca for these sort of triply trained masters for a time after the Chinese Nationalist Party was driven from mainland China by the Chinese Community Party, with lineages there arising from masters such as Wang Shu Jin [5. 6], Hung Yixiang and his brother Hung Yimian [2], and Pan Yue [9], the last of which gave rise to master Wei Chung Lin, my first Baguazhang sifu.

What was common between these Taiwan based masters was that all believed Baguazhang was not meant for beginners. Harkening back to Dong Hai Chuan's example, all believed that students required a basis in something else, be it Xingyiquan, Shaolin, or some other "simpler" style before one could make the most of Baguazhang's sophisticated (and borderline impractical and outlandish appearing) techniques and tactics.

The early twentieth century saw Baguazhang practitioners leaving the Chinese mainland for a variety of reasons. One practitioner, Lu Shui-T'ien, during World War II, left the mainland for Korea after China had been occupied by Japanese forces, occasionally making guerilla forays against the Japanese until the end of the war, whereupon he retired in Korea and eventually passed his art down to a Korean man named Park Bok Nam [11, 12].

Baguazhang also made its way to Indonesia around this time period, said to be taught by imperial bodyguards who were gifted to the Indonesian king by Chinese royalty. Eventually this Baguazhang was incorporated into a local system of martial arts named Low Tiger Kuntao, which was spread by the Shaolin-trained Buddhist missionary Liu Seong and passed down to the Dutch-Chinese martial artist Willem Reeders [13].

Unfortunately, much of these early twentieth century tales of Baguazhang come from half-remembered oral traditions, so matters such as the exact lineage of these Baguazhang branches in other countries are difficult to name. Both Park Bok Nam's and Liu Seong's Baguazhang share certain characteristics such as hard, forceful strikes using consolidated force, leading me to believe that the predominant influence on those two branches of Baguazhang came from the Yin Fu tradition, compared to the relatively softer (though no less powerful) force of the Cheng or Sun traditions. Given the paucity of students in their lineages, it is unlikely that Ma or Song Baguazhang had much influence on these traditions. Interested readers are encouraged to contact representatives of those lineages for further information if desired.

The current era provides a myriad of both challenges and opportunities for the modern Baguazhang practitioner. Baguazhang was previously considered a secret art meant to preserve life and inflict death, similar to access to firearms and military secrets today. Certain lineages went so far as to only teach "everything" to a single trusted student in each generation so that knowledge would not be used and abused. This nearly lead to the loss of the Yin Fu Baguazhang tradition in the late twentieth century when the chosen successor died in a car accident, prompting the lineage head, Xie Peiqi, to spread his art across more than a single student [21].

Some masters, however, remained as secretive as ever and refused to pass on vital aspects of their art, especially their force training and combat applications. Wang Shujin, for example, was infamous for teaching the movements of his two main Baguazhang sets, and even his stances as force training, but seemingly never passed on actual combat applications, expecting his students to figure them out on their own [5, 6]. This startling lack of combat skill can unfortunately be seen in some branches left behind after his death, especially in Japan, where while he was a prolific teacher of internal kung fu forms and qigong, it seems as though he may never have taught a single one of them how to deliver and defend against a punch.

Luckily, teachers tend to be far more open with their art nowadays, going so far as to spread their writings and even videos to the modern audience. Unfortunately, the skill of many self styled practitioners of Baguazhang lags far behind the generosity of modern masters. It is not a rare or difficult thing to watch fights or even simple sparring matches on YouTube or television and to witness Baguazhang and other practitioners of traditional martial arts being handily defeated.

Often times, it is difficult to even tell if someone is a Baguazhang practitioner in these videos because they do not even use Baguazhang stances or techniques! Given the sophistication of Baguazhang techniques and even its most basic strategies such as the tricky footwork needed to flank an opponent, the learning curve of Baguazhang is steep and demands a very systematic approach to training from beginning to end. The systematic development of a Baguazhang fighter is covered in more detail later.

Another popular sentiment that interferes with the development of skillful fighters in the modern era who train Baguazhang is the sheer amount of philosophical haberdashery that is spread about. The earliest practitioners of Baguazhang were illiterate, disciplined fighters who entered and left fights with nothing but their clear minds, sharp eyes, and hands ready to inflict the violence necessary to preserve their lives amidst a battlefield brimming with swords, spears, bayonets, and primitive rifles. They spent more time Circle Walking and practicing their fajing than they did meditating over the Five Elemental Processes, the Eight Trigrams, the Sixty Four Phases, and other forms of Daoist esoteric mysticism that are so in vogue today.

It has been a very common personal experience of mine that those schools that spent an excessive time philosophizing over the mystical and elemental correspondences of their art were among the worst fighters I had ever seen. If they had spent more time even striking a sandbag rather than reading scrolls written in arcane and purposefully confusing five thousand year old language, they would have at least obtained basic force such as Iron Palm as opposed to being unable to perform even Green Dragon Tests Claw in a correct manner.

Another difficulty many Baguazhang practitioners seem to have about their own art is where their power comes from. Numerous Baguazhang practitioners pay lip service to the idea that intrinsic energy, or qi as described by traditional Chinese medical adherents, is what powers the art [1, 3, 4, 5, 6, 8, 10, 11, 12, 14, 17, 21, 22]. It seems as though every school has its own idea as to what is being referred to as energy. Some practitioners believe it is strength provided by the tensile strength of tendons and ligaments and connective tissues [8]. Yet others state that the power generated by Baguazhang training comes from fluid dynamics and the sloshing about of the body's vital fluids such as blood and lymphatic fluid [1]. Yet others believe more in the orthodox Chinese medical paradigm of a vital life force that is cultivated by special practices such as stance training and Circle Walking.

This lack of understanding in the nature of Baguazhang force, especially in those schools that emphasize the orthodox Chinese medical paradigm of energy, bleeds over into tests of combat skill. For various reasons relating to stories about past practitioners, over the top kung fu movies, and other outlandish tales passed down by word of mouth, modern practitioners are occasionally loathe to test their art in free sparring. Stories about the past masters causing their enemies to spit blood from the mouth with a gentle tap of their palm or warnings about how dangerous it is to "play around" with kung fu leads to certain practitioners refusing to test their art in a realistic manner for fear of harming themselves or their partners.

My own exposure to Baguazhang combat skill was rare. Even in Sifu Lin's school, where every tool imaginable for the development of a capable fighter was present, including force, application, and strategies, after Sifu Lin's death, besides myself, there was but a single student in the school that still trained (or even remembered) straightforward combat applications. The remainder of the students preferred to spend their time in meditation and practicing their sets as a form of choreography and demonstration.

Rather than spending the majority of their time on Eight Internal Palms and Striking Methods, the bulk of their time was spent playing with swords and flowing through their sets, and hence even Sifu Lin's senior student, who now teaches in his stead, does not teach partner applications or sparring at all beyond very basic sensing skills similar to the Pushing Hands found in some Taijiquan schools. This state of affairs is exceedingly common in the kung fu world nowadays and is a sad and pathetic stain on the history of a simultaneously brutal and elegant art such as Baguazhang.


27. Baguazhang as Practiced in the Shaolin Wahnam Institute

In the summer of 2012, Grandmaster Wong Kiew Kit of the Shaolin Wahnam Institute taught his interpretation of Baguazhang for the first time in Arundhel, England. Similar to Dong Hai Chuan's original intent, Baguazhang in the Shaolin Wahnam Institute is seen as a specialized art to be pursued after completing basic training in fundamental Shaolin kung fu or Taijiquan, a process which takes the typical student between three and five years to complete [17].

Grandmaster Wong acquired his Baguazhang from a variety of sources, including most importantly intensive correspondence and explanations by master Wong Chong Ling, a Baguazhang teacher who lived in Hong Kong [17] as well as a review of classical and modern literature [16]. The core principles of Grandmaster Wong's Baguazhang are developing internal force through the Eight Mother Palms and the use of characteristic applications in the Swimming Dragon set. 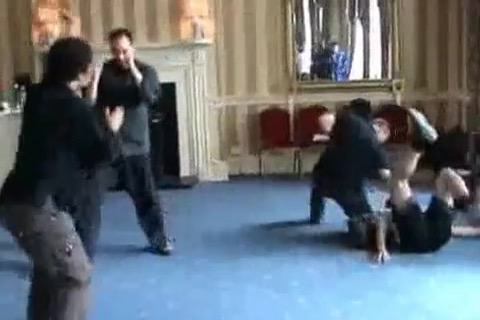 Free sparring during a 2012 Baguazhang class of Shaolin Wahnam. Dr Frederick Chu was on the ground on the right