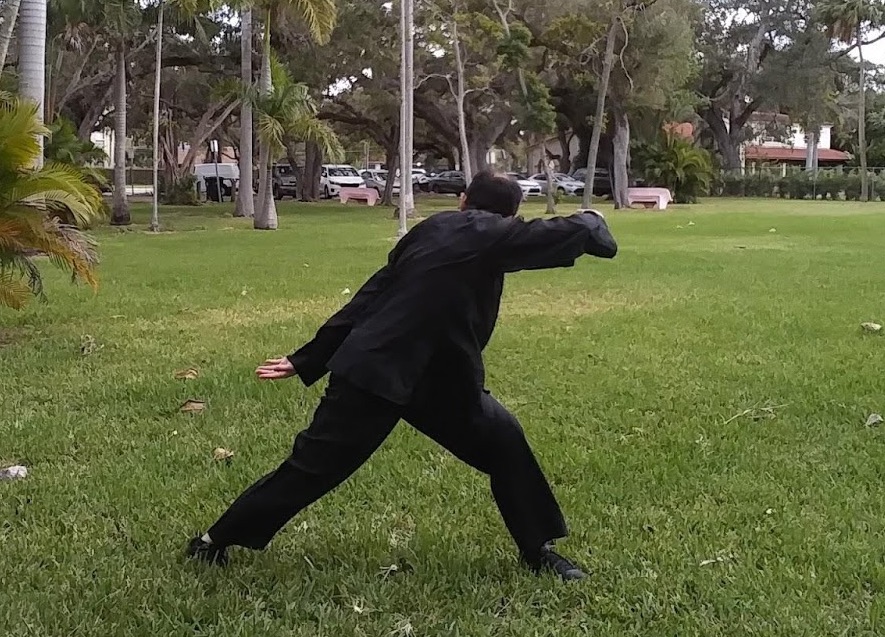 Another combination of static and dynamic training involves Eight Mother Palms stance training, which is seen far less often in public compared to previously mentioned exercises. The practitioner will hold a certain posture, for example, Green Dragon Tests Claw, in one side's mode for a period of time and then switch to the other side for a period of time before walking in a circle using the energy developed from the static posture to flow [17].

Traditionally, each school would take a particular posture from their Eight Mother Palms, a collection of eight short series of movements that encapsulate the most fundamental techniques of their system. Some schools jealously guard their favored postures, seeing them as the true secret of their school's force development. Interestingly enough, some schools are very open with their postures and force training sets. Eight Mother Palms stance training is the primary way of developing force in the Baguazhang practiced in the Shaolin Wahnam Institute and shall be explored in further detail later.

As a brief aside, with even a cursory glance at modern Baguazhang literature as well as the literature and videos available of Baguazhang and other so-called "internal" martial arts, one will find that it is very much in vogue for Baguazhang practitioners to practice their Circle Walking around trees.

Some people, styled as masters by their students or the public, state that it is very important to train in natural environments and around trees so as to absorb good energy from trees, plants, fresh air, and so forth in practice [1, 5, 6, 22]. While I can personally attest to the benefits of practicing outdoors in all manner of weather, be it an arctic tundra, desert wasteland, or the calm weather of the American Midwest, the idea of absorbing energy from trees is patently ridiculous for several reasons.

While the chemical exchange of oxygen and carbon dioxide allows animals and plants to coexist in an excellent symbiosis, at the level of energy or qi dictated by Daoist masters, the energy used by animals and plants is fundamentally different. According to these Daoist writings, the "metabolism" (to coin a modern term for an ancient art) of animals and plants is different enough that not only does the human not benefit much from attempting to absorb a plant's energy, the human does not get much benefit from it. If anything, using this energetic paradigm, the plant is harmed by a loss of nutrients and the human is harmed from not taking in appropriate sources of nourishment [17].

Regardless, in my own practice, just practicing Circle Walking, or any other force training exercise, appropriately and in a meditative state of mind generates more than enough energy for my purposes in both modern life and sparring at the modern level. That being said, an experience that all practitioners will eventually come across is that one takes in what is around oneself. If one trains in pleasant, clean surroundings with adequate air flow and a lack of distractions, the practice is often far more beneficial than if one were to train inside of a stuffy office. While an in depth analysis of environmental factors on the practice (what the Chinese term feng shui) is beyond the scope of this treatise, interested readers are encouraged to discuss with an authority on the matter.

Another common variation seen in Baguazhang practitioners aiming to develop force is the use of various forms of weights during their stance training and Circle Walking. Some practitioners will wear metal rings around their arms, similar to Southern Shaolin practitioners [17], while others might hold heavy metal or stone balls on their palms [4, 8]. Quite unlike the energetic nonsense of attempting to vampirize trees, the physical feedback of even a light, one pound weight wrapped around the wrist or held in the hand is an excellent manner to ensure that the practitioner has correct form and is not using undue muscular tension to hold themselves upright. If a suitably light or heavy ball, wrist-weight, or otherwise is unavailable, then holding a brick in each hand will do, in personal experience. Yang Jwing Ming and Liang Shouyu describe balancing cinder blocks and bricks on their palms, elbows, and other body parts as a part of their tradition of Ermei Baguazhang [22].

From the core exercise of Circle Walking, be it training Eight Mother Palms, Eight Internal Palms, Walking the Circle in Stance Forms, or otherwise come many variations. Perhaps the most famous variation comes from the Shaolin exercise of Plum Flower Formation, also known as Going Through Woods, where the practitioner moves through a "forest" of poles, imagining them as opponents or other people on the battlefield and aiming to flow between these "combatants" to avoid getting struck, to build awareness of the battlefield, and to develop the ability to strike decisively while on the move.

While it may be inconvenient to hammer dozens of poles and pylons into one's backyard (or even illegal depending on local regulations), rough analogues to the poles include traffic or athletic cones, bowls or bricks left on the floor, ropes hanging from the ceiling, or even piles of laundry and other random objects in the home thrown across the floor. Some schools will further modify the "poles", having poles of various heights, angling several of them to force the practitioner to duck, dodge, and sink quite low in their stance or even leap up over an imagined sweep at their legs [11, 12]. This makes for excellent preparation for eventually moving on to sparring multiple opponents.

In addition to speedy movements and seemingly being able to twist, turn, and suddenly be at an opponent's back, Dong Hai Chuan and his students were infamous for their leaps and jumps, collectively referred to as qing gong, or "lightness skills" [1, 3, 8, 9, 11, 12, 14, 17, 22, 23]. Dong's student, Song Changjun (named in some sources as Song Changrong) [1] was most well known for his lightness skills, being nicknamed "Flying Legs Song" for his skill at tightrope walking, performing his Circle Walking on the narrow rims of baskets that had been weighted down with rocks (with legend having it that eventually these rocks were entirely removed with time), running up walls, and leaping through windows.

While Song did not teach very many students, luckily several aspects of his lightness training survived, passed down to the Gao family, with the modern Gao family patriarch, Gao Jiwu, describing the fundamental practice as walking the circle while raising the legs in the Single Leg stance, combined with appropriate breathing methods [3].

While I did not spend much time on this specific training method, nor can I perform at even one percent of the lightness skill that Dong and Song were said to have demonstrated, some of my classmates have commented favorably on my leaping ability and arrow step, and I believe that part of my jumping ability came from spending a few months on this practice. This practice is not absolutely necessary to developing a modicum of lightness skills, however. The Eight Internal Palms and Eight Mother Palms Circle Walking that I learnt early on from Grandmaster Wong and from Sifu Lin right at the start of my Baguazhang training did much to enhance my speed over a period of time.

Baguazhang, like all great martial arts, is complete. There is no need to draw upon outside material to become a competent, healthy, and long-lived Baguazhang practitioner. The two pillars of all kung fu are force and application.

While there are dozens, if not hundreds of exercises, techniques, and so forth in pretty much every Baguazhang school's repertoire, at its core, Baguazhang is composed of two sets of exercises: Circle Walking, which provides force, and the 64 Palms, a collection of combat applications, without which Baguazhang cannot be called a martial art [16, 17]. Beyond Circle Walking and the 64 Palms, each school has its own supplemental methods to meet their particular aims and objectives.

Even inside of the Baguazhang tradition, there are exercises beyond Circle Walking to enhance the practitioner's attainment in health and combat. Park Bok Nam calls these supplemental exercises important to "build the Bagua body" [11, 12]. Park's school uses a series of exercises aimed at allowing the body to rotate from its central axis (a line running from the crown of the skull to the tip of the tailbone) to streamline body mechanics, to allow the entire body to move as one coordinated unit, and to focus power at the palms [11, 12].

Yang Jwing Ming and Liang Shouyu share their own series of qigong exercises which incorporate Daoist as well as Shaolin qigong patterns to improve energy flow and flexibility across the body [22]. Sifu Lin had "warm up exercises", as he called them, to enhance flexibility in the waist and spine and to focus power at the palms as well, one of which greatly resembles Lifting Water, also known as Lifting Hands, in Taijiquan [9].

Let this be a lesson to every kung fu student: sometimes what the master calls "warm up exercises" can actually be extremely powerful exercises to build internal force. Neglect them at your own risk. Grandmaster Wong likewise has a series of flexibility exercises, prosaically titled the Art of Flexibility, which draws from the Eighteen Lohan Hands and Tongzigong to provide his kung fu students with the flexibility and agility needed to perform kung fu combat applications with ease [17].

The Association for Traditional Studies, for example, holds that Yin Fu inherited a complete system of qigong, physiotherapy, massage, acupuncture, and diet from Dong Hai Chuan to provide venues for both health as well as combat [21]. Due to Baguazhang's historical and philosophical ties to Daoist sects, some lineages of Baguazhang practice qigong, meditation, and other exercises from Daoist traditions, such as Eight Pieces of Brocade, especially if they have only learnt Baguazhang for combat as opposed to a health sustaining art [4, 8, 17, 22]. Related to the Eight Pieces of Brocade are the Eighteen Lohan Hands (the first eight of which are the Eight Pieces of Brocade) which provide even more options in energy cultivation to the practitioner. 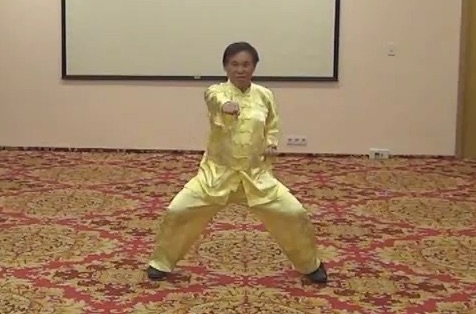