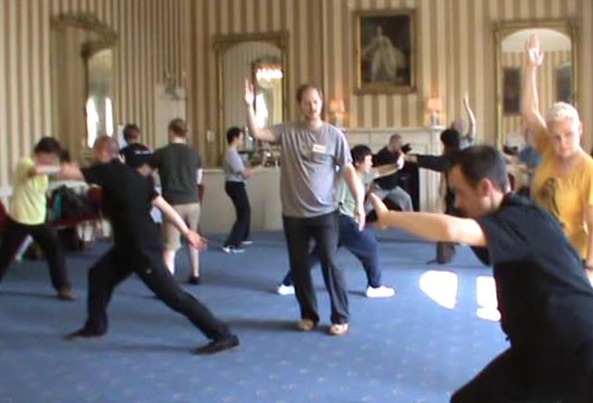 Baguazhang, like any other martial art, does have its own specialized methods of acquiring "force". Even the very beginning movements of practice are themselves a training of body, energy, and mind. In many Baguazhang sets, as well as Taijiquan, Wudang, and Xingyiquan sets, the practitioner stands upright for a brief period of time in a neutral pose called the Wuji stance. Taking a moment, or even many minutes, in this posture as standing meditation relaxes and primes the body and mind for the practice to follow, as opposed to merely practicing rote physical movements.

A very common subsequent movement is drawing the arms up and outwards to either side and then above the head before sinking the palms down the front of the body, prosaically called Gather Energy From Cosmos, for that is exactly what this pattern is doing, besides providing a gentle way to stretch and lengthen the entire body besides opening the chest and abdomen.

Some schools will then press the heels of both palms together before pressing their palms forward in a pattern named Old Monk Presents Bowl. This method helps make the forearms, wrists, palms, and fingers quite flexible besides spreading energy to the palms, making them powerful and agile for combat. While some practitioners will only perform these movements once or twice at the beginning of their sets, it is a worthwhile investment to perform these patterns for many repetitions before moving on to "proper" practice.

The most famous method of developing force in Baguazhang is Circle Walking. While the specifics of how the bodily postures, points of mental focus, breathing methods, speed, timing, and every imaginable aspect of the exercise vary from school to school, the heart of the exercise is assuming an appropriate position and walking in a circle for a period of time.

Circle Walking is a true multi-tool of force training; because so many variations of the exercise exist, practitioners of all skill levels can practice and get different benefits. Perhaps the most well known variation of Circle Walking is using a posture known as Green Dragon Tests Claw, often considered the typical guard position, fighting stance, or poise pattern of Baguazhang and walking in a circle.

Much can be said about Green Dragon Tests Claw, especially its use in Baguazhang training. At a base physical level, the legs are held with the heels in one line, the feet angled at 45 degrees, and the feet approximately one and a half to two shoulder widths apart with the weight evenly distributed between the feet or being slightly rear-weighted with sixty percent of weight on the back leg.

The position of the legs is known as the Stream Character stance, though its popularity in Baguazhang, even to the point of certain lineages doing away with all other stances and using it for all combat applications and force training, has led to some calling it the Bagua stance.

Many arguments have been posited regarding why the heels are in one line, versus being apart as is typically seen in other kung fu styles such as Taijiquan, Xingyiquan, or Wuzuquan. The answer to that question, as with many other questions in Baguazhang, has to do with agility. With the trademark combat feature of Baguazhang being to flank an opponent, by having the feet in one line, the practitioner is more easily able to dodge to either side without significant readjustment, according to the opponent's angle of attack.

The arms and open hands are held in an outstretched, typical guard position that protects the torso and head from direct attack. The most common posture used by Baguazhang schools is to have the center of the front palm facing outwards towards the opponent while the rear palm is held in whatever suitable position (be it facing forwards as well, facing downwards, or to one side) as a guarding position, in a similar manner to Xingyiquan as opposed to Taijiquan and Shaolin kung fu where the edge of the front palm often faces forward in patterns such as Playing the Lute or Amitabha Palm.

With the palm's edge pressed forward and the fingers held closely together in the Willow Leaf Palm as in Playing the Lute or Amitabha Palm, the practitioner's force is relatively more consolidated and focused, especially at the edge of the palm. When the fingers are held slightly apart and the center of the palm faces forward, the practitioner's force is relatively more flowing and focuses at the center of the palm before flowing out to the fingertips.

Baguazhang, though scant in classical literature, provides us with the 36 Songs and 48 Methods meant to guide students in their martial practice and application. Two translations of the first Song, which describes the performance of Green Dragon Tests Claw according to an unknown master in the first three generations of Baguazhang, state:

"The chest relaxes, the crown of the head lifts up, and the waist sinks,
The toes point inward with the steps, the knees are close to each other.
The shoulders sink, the elbows drop, and the front palm extends forward,
The eyes look through the space between the thumb and the index finger." [1]


While the former translation is more literal and in line with classical Chinese and the latter more palatable to English audiences, the general features are similar. However, even this original source of Baguazhang writing is not necessarily followed all of the time.

Yin Fu Baguazhang's Lion system, for example, founded on Northern Lohan principles before the addition of Baguazhang, does not have a "tiger's mouth" (the space between the thumb and index finger) through which to look at an opponent, thanks to the position of the fingers held in the Ox Tongue Palm hand form [9, 21].

Demonstrations of Ma Weiqi fighters may have the front palm down at the level of the chest or even waist as opposed to the head [8]. Cheng and subsystems from Cheng Ting Hua's students such as Gao and Nine Palaces practitioners likewise may not use the tiger's mouth alignment at all [9, 20].

Regardless, in sparring and fighting, it is results that matter more than litanies of demands. The reader who is interested in requirements for various stances in different lineages is encouraged to peruse the sources noted. Indeed, some schools will posit twenty to thirty individual anatomical points to keep in mind at all times. That is frankly exhausting, counter-intuitive, and serves little to no purpose to the beginning student who can only focus on two or three things at a time in the beginning, for example, weight distribution or the height of the hands.

The head-on stance of Green Dragon Tests Claw used in combat has, as its most well known variation, a sideways stance which is used in Baguazhang's most famous exercise, Circle Walking. Unlike its parent style of Shaolin kung fu, when training Circle Walking, Baguazhang has its three external harmonies each pointed in a separate direction.

Whereas a typical pattern in Shaolin kung fu might have feet, body, and hands pointed in a single direction for the purposes of decisive force and Taijiquan might have two of its external harmonies (for example, feet and body in one direction but hands in another during a warding off maneuver of Immortal Waves Sleeves), Baguazhang during Circle Walking has the feet pointed in one direction, the body facing another, and the hands pointed in yet another direction. If, for example, an imaginary line were drawn from the rear heel to the front heel from west to east, the torso would be turnt to face northeast, and the palms pointed to the north when the Baguazhang practitioner begins their Circle Walking exercise.

With every step along the circle, the practitioner adjusts to maintain their three external harmonies twisting and turning inwards. The turning and twisting of the body serves several purposes, such as the development of flexibility, the ability to strike an opponent decisively in any direction, and, at an energetic level, helps compress and focus the practitioner's power to more effectively strike an opponent down.

Baguazhang has a very high demand in flexibility and fluid movement, especially given the mass fighting and urban warfare that past practitioners had to survive at the end of the Qing dynasty. It is a lucky bonus that the exercises and demands of Baguazhang as a fighting art, especially its agile movements and flexibility, enable practitioners to maintain a high level of mobility and strength even in old age. 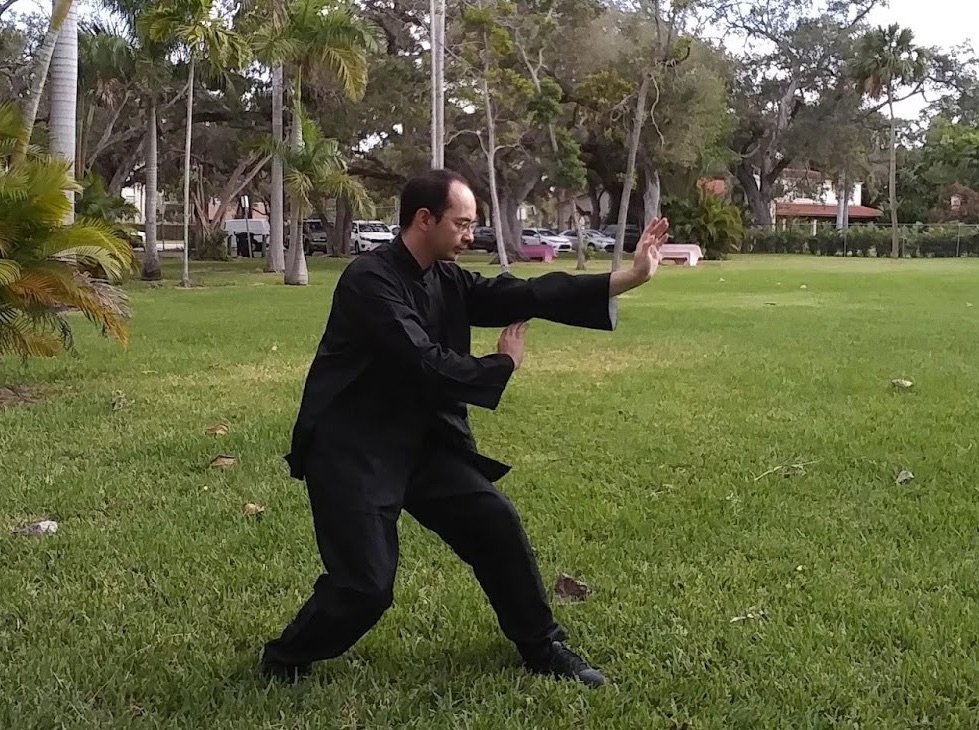