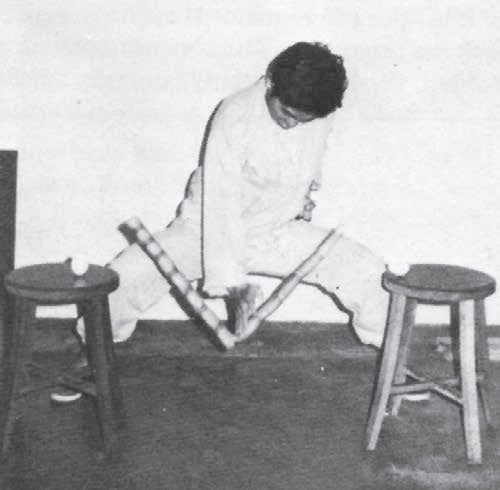 There is a kungfu saying: If you practise only techniques, without training force, then you may achieve nothing even if you practise a life-time Whatever techniques of attack or defence you use, there must be sufficient force to back the techniques, or else kungfu may degenerate into a sort of dance or what the Chinese term "flowery hands and embroidery legs" -- good only for demonstration but not for practical combat purposes.

The term "force" as used in kungfu terminology may be quite deceptive; it does not actually mean "mere strength". This term is chosen because there is no better equivalent. Force is a sort of inner strength, acquired through prolonged, consistent training.

In internal force training, the emphasis is on chi, or intrinsic energy. This involves meditative-respiratory exercises. The training process -- like the various breathing exercises -- is internal and not visible; one cannot see the movement of "chi" inside the body. The force achieved in internal training is "soft". Some examples of internal force is the ability to take blows or kicks without injury; and the ability to injure the internal organs of an enemy without hurting him externally.

The various types of force mentioned above are highly specialised arts. A kungfu master generally acquires one or two of these arts only -- iron palm or tiger-claw for fighting purposes, meditative-respiratory training for health. Such specialised training is normally taken when the kungfu exponent has acquired a fairly good foundation in basic techniques. On the other hand, all kungfu students, I strongly believe, must spend some time and effort in some basic force training, at the same time as they learn basic techniques.

The Horse-Riding Stance is a very basic and essential form of force training; it is also one of the easily overlooked and frequently under-rated. Its importance can never be overstressed, as it lays the foundation for all other kungfu practice. Please read pages 29-31 for a detailed explanation on how to perform the stance, and pages 34-35 for the importance and benefits of the stance.

You hold a "stone-lock" in each hand while punching. In ancient China, there were no dumbells; of course you can use them instead of "stone-locks". 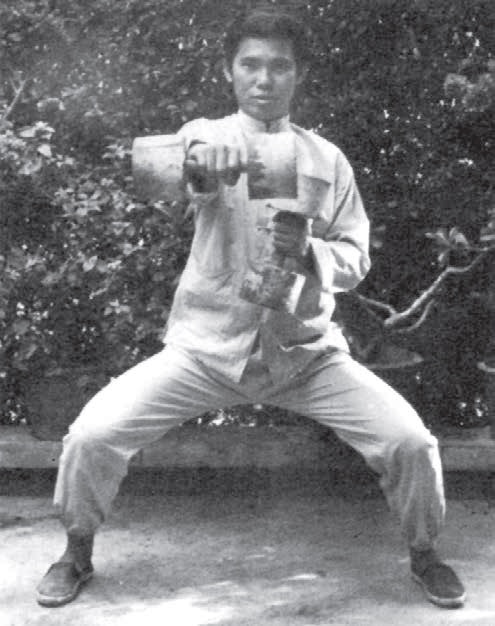 For initial practice, the "stone-lock" should not be too heavy. Increase the weight gradually. Pay careful attention to the inner aspects of mind-concentration, "chi" and inner strength movement, as well as exactness of its outward form.

The Use of Medicine

In punching sand-bags and other forms of hand toughening, it is advisable to apply some Chinese medicated wine to the hands before and after training. Chinese medicated wine is a kind of herbal ointment obtained from soaking a variety of herbs in rice wine for some time. It is very effective in eliminating bruises and pain as it promotes smooth flow of blood and "chi". It is necessary to keep the hands dry from water for at least two hours after the application of medicated wine. Medicated wine can be obtained at reasonable prices from most kungfu masters or Chinese "bone-doctors", where the term refers to specialists who spcialise in curing fractures and other injuries resulted from falling or being hit.

The use of medicated wine in training is very important. Besides helping to strengthen the hands or any other parts of the body, the medicated wine also helps to maintain their normal shape and appearance. Those who do not use medicated wine in hand-conditioning, like punching a sand-bag or chopping wooden planks, face the risk of having their hands deformed or mis-shaped if they train too vigorously. With the help of medicated wine and proper training techniques, the hands of a kungfu master, who may break bricks with them, may still look fine and gentle like a lady's.

If the learner cannot obtain medicated wine, he can use lukewarm water to bathe his hands before and after training. Although it does not have the same effectiveness as medicated wine, it can nevertheless prevent internal blood-clotting and possible deformity of the hand.

Editorial Note: Students of Shaolin Wahnam need not use medicated wine because of chi flow, which is actually more effective than medicated wine.