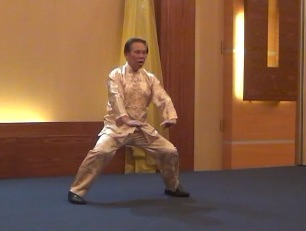 You described San Zhan as profundity in simplicity and gave us a fascinating account of the special benefits of preparing the Wuzuquan course in December 2012 in Malaysia (to be read here) which has lead to some questions on my part:

How does San Zhan create so much internal force? Is this principle found in other force training methods in our school?

What are other special internal skills which are developed by this set? How can we test them and what are their benefits in daily life?

Finally, if I may, why has this set remained the same since its creation in the Yuan Dynasty while so many other high level sets have been modified throughout history?

I practiced San Zhan for more than two years under Sifu Chee Kim Thong who was regarded as the living treasure of the Peoples’ Republic of China, and whose school was famous for internal force. But I did not develop any internal force at that time, because I did not know the necessary skills.

These two essential skills are to be relaxed, and to be free of all thoughts. If you have these two skills, and practice correctly any internal force training techniques, you will have internal force.

I believe that the most powerful set by itself that can develop internal force is Iron Wire. When I practice Iron Wire, for just only a few months, at a time when I did not know the two essential skills, I could develop a lot of internal force, though initially I performed Iron Wire as an isometric exercise instead of as an internal force training set.

Indeed, if a practitioner can be relaxed and his mind can be freed of all thoughts, he can develop some internal force using San Zhan and any Taijiquan sets. Not many people know this fact, as is evident in the fact that many Taiji practitioners today do not have internal force.

Besides this principle of being relaxed and freeing the mind of all thoughts, there are many internal skills that are developed by San Zhan, like being gentle and graceful, having flowing energy, having mental clarity, and being fast and agile.

An effective indication, however, comes from direct experience. We can rightly say that after practicing San Zhan for some time, we have become more gentle and graceful, our energy is flowing instead of being stagnate, our mind is clearer, and we are faster and more agile than before.

The benefits in daily life are quite obvious. Other people will find us more pleasant when we are more gentle and graceful. When our energy is flowing instead of stagnant, we have good health, which is obviously more beneficial than being sick. When our mind is clearer, we are more effective in whatever we do and think. When we are faster, we complete our jobs, both intellectual and physical, in a shorter time, resulting in our having more time to do other things. When we are agile, we can perform our tasks with ease and elegance.

This set has remained the same since its creation in the Yuan Dynasty because masters teaching it have found it excellently serves the purposes for which it was created. It is excellent for developing internal force, and excellent for combat application, if practitioners know how. Changing its patterns or structure would negatively affect its effectiveness in these two pillars of kungfu training.

San Zhan is a wonderful set. But it must be learned from a competent teacher who can, and is willing to, reveal its internal force training and combat application. 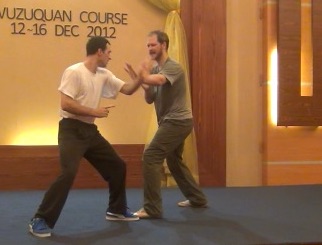 This question and answer are reproduced from the thread Wu Zu Quan -- 10 Questions to Grandmasrter Wong in the Shaolin Wahnam Discussion Forum.