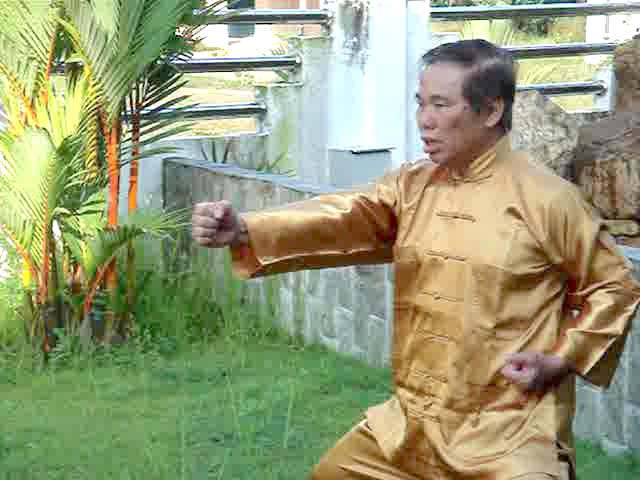 As I have attended the Triple Stretch course in the UK as well as the Wuzuquan course in Malaysia I have a specific question:

What are the benefits on the physical, energetic (force) and mind levels for someone who specializes in the Triple Stretch Set by practicing the San Zhan Set of Wuzuquan?

I am not sure whether the selected set of my sifu, Uncle Righteousness, was also Triple Stretch, because he also used Dragon Strength, but he frequently used a sequence from Triple Stretch, that of Black Tiger and Fierce Tiger, and it won him the honorable nickname of Uncle Righteousness. Incidentally, the sequence my sifu used was also simple. It was his skills in using the simple techniques that made him formidable.

The combat techniques of San Zhan are simple. Many martial artists may not know how these simple techniques are applied in combat. Hence, they are also very profound. By being simple, I mean there are minimal moves. The techniques are used on opponents directly and fast. By being profound, I mean the application of the techniques is not obvious or easily known.

By comparison the combat techniques of Triple Stretch are obvious. When a Triple Stretch exponent executes an elbow attack, a low tiger-claw to the groin, or a hanging fist to the face, for example, an opponent knows the attack.

An obvious physical difference is the use of the Bow-Arrow Stance in Triple Stretch, and the Triangle Stance in San Zhan. An initiated person would know that the Bow-Arrow Stance is used in attack, but not many people would know that by a skillful application of the Triangle Stance an exponent can use it against any form of attack.

In Triple Stretch an exponent can avoid an opponent’s force by retreating to the False-Leg Stance. Not many people would know that a San Zhan exponent can achieve similar effects by subtle movement of the body, often without moving the legs, and the San Shan movement is faster.

Energetically, the force in Triple Stretch is consolidated, whereas that in San Zhan is flowing. If all other things were equal, consolidated force, while powerful in combat, is not conducive to health, but flowing force is.

When consolidated force is exaggerated, which may happen even to some masters, the energy that contributes to internal force will be locked up to become muscles, and this is detrimental to health. This will not happen in San Zhan simply because the energy is flowing. Even amongst beginners who have not developed flowing force, locking their energy to become muscles will not happen to them because they have to be relaxed when performing the set, whereas in Triple Stretch beginning students may tense their muscles.

But other things are not equal. Shaolin Wahnam students are able to generate chi flow. Even when they consolidate their energy to become internal force in Triple Stretch, their energy is flowing. Even when they practice wrongly when attempting to consolidate force, but performing isometric exercise instead of consolidating their flowing energy, their chi flow at the end of their training session can eliminate any harm caused.

On the other hand, it is more difficult to develop internal force, or even mechanical strength, in San Zhan. I spent more than two years practicing San Zhan but I did not develop any internal force. Perhaps if I had spent twenty years, I might develop it.

It is easier and faster to develop internal force using the consolidating method. Even when a practitioner practices wrongly, tensing his muscles instead of consolidating his flowing energy, for example, he can still have mechanical strength, though this may be detrimental to health. But our students in Shaolin Wahnam can overcome the mistake and still get a bonus with their chi flow.

Because one has to be relaxed when performing San Zhan, he (or she) can achieve more and faster at the mind level. Even when a Triple Stretch practitioner practices correctly, like consolidating flowing energy instead of locking his energy into muscles, the nature of his practice is such that his attainment will be less and slower at the mind level. Hence, if all other things were equal, a San Zhan practitioner is more relaxed, more focused and has more mental clarity than a Triple Stretch practitioner.

We had direct experience of this benefit at the Special Wuzuquan Course in Penang in 2012. Besides developing internal force in the orthodox way, course participants use San Zhan techniques to develop internal force as in Iron Wire, Flower Set, Siu Lin Tou and also in Triple Stretch. This may not be possible using Triple Stretch techniques. Course participants could do so because they were relaxed, which contributed greatly to the mind level.

Our Family members can apply the same principle in their daily life, including in intellectual work. Hence, if all other things were equal, a San Zhan practitioner would be more efficient than a Triple Stretch practitioner. (This, of course, does not mean a Triple Stretch practitioner is not efficient.) If he (or she) plans a company project, plays tennis, eats breakfast, or engages in sex, for example, he will have better results.

This question and answer are reproduced from the thread Wu Zu Quan -- 10 Questions to Grandmasrter Wong in the Shaolin Wahnam Discussion Forum.