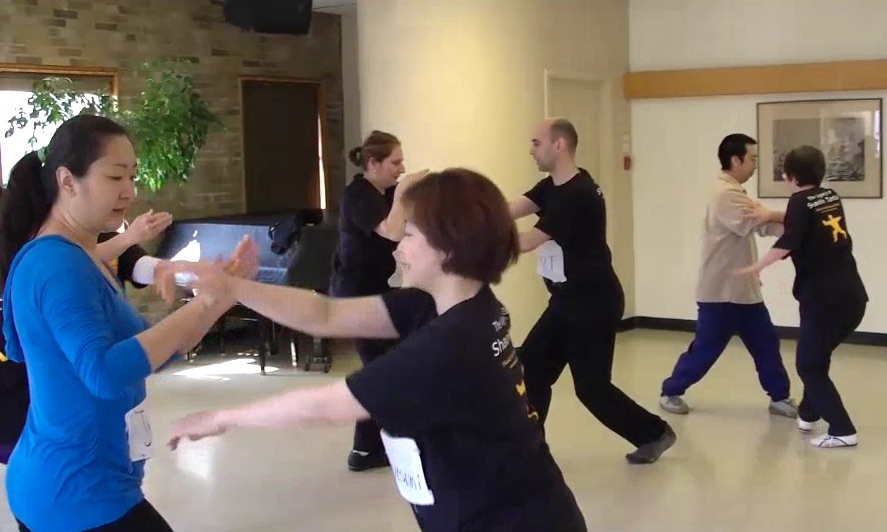 Our female students remain beautiful and feminine while being combat effective

If there were a modern day Yim Wing Chun (i.e. a beautiful and feminine young woman) out there wishing to take up kungfu, what would be the complete set of benefits to her from practicing Shaolin Wahnam Wing Choon?

A modern day Yim Wing Choon, i.e. a beautiful and feminine young woman, will get a lot of benefit practicing the style of Wing Choon practiced in our school. I use the term Choe Family Wing Choon, but later, if conditions are suitable, we may change the term to Shaolin Wahnam Wing Choon as suggested by you because there are some noticeable differences between the Wing Choon I first learned from my sifu, Sifu Choe Hoong Choy, and the Wing Choon I now teach.

Her benefits are quite extensive, covering many areas.

Firstly, she will have good health, vitality and longevity. This is a fundamental set of benefits one will get by practicing any arts in our school. This is also an area where we place more importance than combat efficiency. The main reason why we can give these wonderful benefits is because we practice our Wing Choon as chi kung, and attaining good health, vitality and longevity is the expected result of practicing chi kung.

Many other Wing Choon schools may not have these benefits. Their practitioners practice their art at the physical level, and not as chi kung. Thus, they do not derive the expected benefits of chi kung, which are attaining good health, vitality and longevity. Worse, they often neglect their health from sustaining injuries in free sparring, and their injuries are routinely unattended to.

Another wonderful benefit, which is of particular to women of any age, is that practicing our style of Wing Choon will make them even more beautiful and feminine. This is in direct contrast to the kind of image some practitioners of other styles of Wing Choon often reflect, that of being muscle-bound and aggressive.

How did the real Yim Wing Choon or how does the modern day Yim Wing Choon have strength and strong arms for combat efficiency if she does not lift weights and hit a wooden dummy? She used, or the modern counterpart uses, superior method of developing internal force through Siu Lin Tou. Not only internal force training gives her more strength and more powerful arms, without being bulky and muscular, but also it gives her rosy cheeks and sparkling eyes, enhancing her beauty and youthfulness.

Another set of wonderful benefits from training Choe Family Wing Choon is having mental clarity and spiritual joys, but not religious. Having a mind clear of irrelevant thoughts is a crucial requirement for practicing Choe Family Wing Choon as an internal art, and this leads to mental clarity. Internal art cultivates not just the physical body but also the spirit, leading to spiritual joys like being relaxed, peaceful and happy.

Yim Wing Choon never meant her art to produce practitioners who were aggressive and violent. All great Wing Choon masters, ranging from Wong Wah Poh and Leong Yi Tai to Leong Chan and the modern master, Yip Man, were relaxed and peace-loving. My Wing Choon sifu, Sifu Choe Hoong Choy, despite, or more correctly, because of his combat efficiency was well known for being humble and soft-spoken.

Some people may think, wrongly, that because he always won in many fights, Leong Chan was rough and aggressive. Far from it. He was humble and soft-spoken. The people of Fatt San called him “Mr Gentleman”, or “Chan Sin Sang” in Cantonese.

Our beautiful and feminine young practitioner of Choe Family Wing Choon will be combat efficient, both in real fighting which rarely occurs nowadays as well as figuratively in meeting the demands of everyday life, which is a special benefit in our school. In actual fighting she will be able to apply her Wing Choon Kungfu for combat, and not bounce about like a kick-boxer. Although she is feminine, she will be able to handle opponents who are physically stronger and bigger in size. She will also be able to transfer her combat skills and philosophy to meet demanding situations in everyday life.