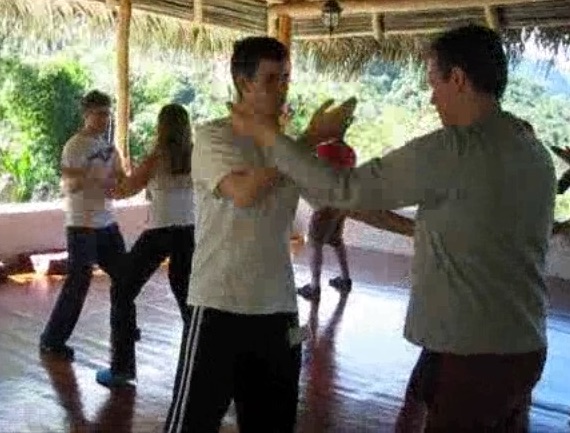 Are Sticky Hands the same as Pushing Hands or have they a different approach?

Sticking Hands and Pushing Hands are the same and also different.

Sticking Hands is the Wing Choon counterpart of the Taijiquan Pushing Hands. The Hoong Ka and Wuzuquan counterparts are Asking Bridge and Kneading Hands.

All these four methods of the different kungfu styles are to train sensitivities of the arms so that a practitioner can respond to an opponent’s attack spontaneously and correctly. At an advanced level, the practitioner does not even need to look at the attack.

Many course participants at the Special Wing Choon Course in Penang in 2010 told me that they could respond more effectively by sensing with their arms than looking at the attack with their eyes. This is scientific. Their arms, which had a consciousness of their own, responded immediately, instead of the eyes sending impulses to the mind which then redirected instructions to the arms to respond.

At an even higher level, the response is instantaneous without the arms in contact. Some of you may have seen me responding to an unexpected attack in this way while I paused in a demonstration to explain to a class but the other demonstrator, not realizing that I had stopped, continued to attack me.

I recall an incident more than 30 years ago in Alor Star when I was teaching a Wing Choon staff set to a student. He stopped at a pattern crouching on the ground with his staff. I moved towards him to correct a fine point. Suddenly he rose and quickly thrust his staff right into me. This was the next pattern immediately after the crouching pattern on the ground.

I bet that most people would be hit, walking straight into a thrusting staff. Instinctively I used my right tiger-claw to grip the staff as it was inches away from my face. The student was shocked and apologized profusely. I believe it was impossible to be in time to grip the staff on a physical level as it happened so fast. By the time the eyes saw the coming attack, it would be too late for a correct response.

The second explanation is that of mind field. I have expanded my mind beyond my physical body. When someone suddenly attacks me, even without my seeing the attack, my mind has picks up the impulses and enables me to respond spontaneously and correctly. This explained my instantaneous response to the staff thrust. It also explains why masters in the past could avoid arrows and flying darts shot at them. At the physical level, it would be too slow. By the time the eyes saw the arrows and darts coming, there would not be enough time to avoid them. The masters could avoid them because they operated at the mind level. This was one of the many manifestations that the highest kungfu operated at the mind.

Both Sticking Hands and Pushing Hands train sensitivities and instantaneous response, but their approach is different. The difference can be seen in their training methods.

In Choe Family Wing Choon, Sticking Hands is performed with two practitioners standing facing each other in Goat Stance. There are two basic movements, circulating hands or “huein sau”, and covering hands or “kham sau”.

The aim is for each opponent at any time to strike his opponent, who will respond accordingly. To make the training systematic, a particular routine is first followed. In our school the routine covers all the four modes of striking – top, middle, bottom and sides – from both the in-gate and the out-gate modes.

When students are familiar with both the attack and the counter movements, control is gradually released so that the students progress gradually from fully controlled following a set routine to totally free without any routine. The practitioners may also adopt any suitable stances and move in any suitable steps.

The same procedure is followed using kicks, felling techniques and chin-na. Eventually any one practitioner can use any of the four modes of attack, and the other practitioner will respond spontaneously and accordingly, including responding with continuous counters. It should be noted that even at this stage, it is still not yet free sparring. The practitioners still start with their arms in contact and at the Goat Stance. In free sparring the arms of the two combatants are not in contact.

In Wahnam Taijiquan Pushing Hands, two practitioners use the Bow-Arrow Stance and their right arms are in contact using the pattern “Immortal Waves Sleeves”. First they practice stationary Pushing Hands, i.e. without moving their feet, though they may move their body if an attack is at middle range. If an attack is at close range, they do not move their body, they ward off the attack with their arm.

From my observation, those who practice popular styles of Wing Choon do not deflect an attack the way we do in Choe Family Wing Choon. They seldom rotate their waist but maintain their frontal position and ward off the attack from their center-line. In Choe Family Wing Choon, our defence issues from our waist, sometimes without even moving our hands. In popular styles of Wing Choon, their defence issues from their shoulders, often with much arm movement. Because we employ leverage of our waist, we need less force to deflect an opponent’s attack.

In other words, we use the best footwork according to the range of attack. If an attack is short range, it is not necessary to move the body or the feet. If the attack is middle range, it is inadequate to avoid the full force of the attack by just using the arm, so shifting the body back is an excellent move. Moving the feet back would miss the opportunity of counter-strike, for which Taijiquan is well known. If an attack is long range, like when an opponent is moving into you, just using your arms or sinking back your body is inadequate, so you have to move one step back. Because your opponent is moving forward, even when you move back, you will still be close enough to counter-strike him, while being far away to be safe.

When Wahnam Taijiquan students are familiar with these footwork movements, they can progress to a more advanced level of remaining in the centre. When an opponent moves forward with a long range attack, they may, for example, employ the tactic of interception. They sink back their body without moving their feet to intercept an opponent’s attack when it is at middle range before it has progressed to long range, deflect it and counter-strike. This is a very effective counter.

These lessons on footwork and range of attack are not as systematically taught in our Wing Choon syllabus as in Taijiquan. Thus students who wish to specialize in Wing Choon Kungfu, can benefit much from breadth and depth if they attend some Taijiquan courses. These principles and practice, of course, are applicable in daily life.

A student, who has internalized his Wing Choon training, may aggressively fight back or move away when someone attacks him at his work place. But a Wing Choon student with supplementary Taijiquan training can turn the situation to his advantage.

The following are some possible scenarios.

Attacker: “Why do you talk to that customer? It is not your job.”

Wing Choon student: “You mind your own business” or finding the attack overwhelming, he moves away.

Wing Choon student with Taijiquan advantage: “It’s not my job but I work in the same company. I try my best to help the customer. But you did nothing.”

This is spread and depth, a special feature of our school. 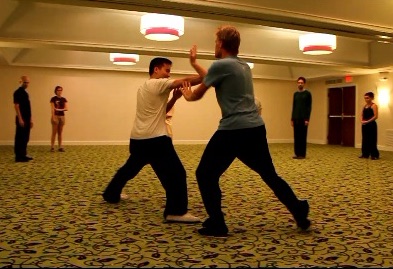