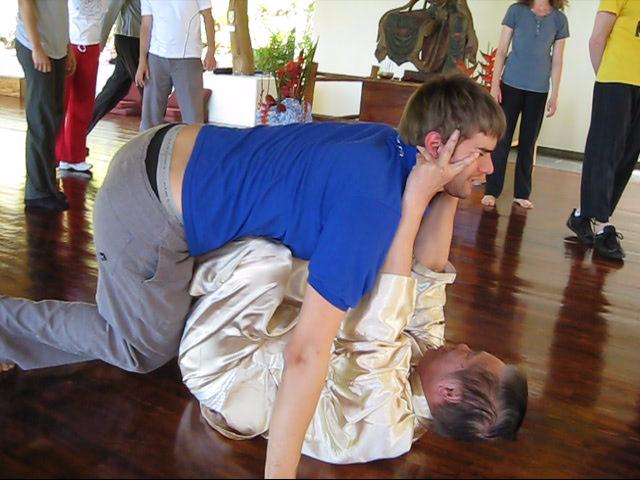 This technique, "Spiritual Monkey Plucks Coconut", is found in Wing Choon Kungfu, and is effective against a shoot, but not many practitioners may know it

Sifu, Can you please explain the strengths and weaknesses of Wing Choon Kung Fu?

There are two weapon sets using the Butterfly Knives and the long staff. As sparring using weapons is not popular today, we shall focus our discussion on its strength and weakness on the unarmed dimension, mentioning the weapon dimension only on passing.

Because there are only a few sets, practitioners of this style of Wing Choon Kungfu can spend much time on sparring, unlike in some styles where students spend most of the time performing their many sets. This makes these Wing Choon practitioners combat efficient, whereas most other kungfu practitioners only demonstrate beautiful forms, or use kick-boxing if they have to spar. This is their strength.

If both have the same level of skills, the limited range of techniques of popular Wing Choon Kungfu would be a weakness. Because of the small range of techniques in his repertoire, a Wing Choon practitioner would find it difficult to defend against the continuous kicks of a Taekwondo exponent, the throws of a Judoka or the locks of a Jujitsu practitioner of the same skill level.

However, if you have similar level of combat skills as the muscular charging Wing Choon exponent, including similar sparring experience, and employ a Taijiquan technique to cover his chain-punches adequately, a Baguazhang technique to get to his back, or a Monkey style technique to slip below him to steal his peaches, the Wing Choon practitioner would not know what to do because he did not have the necessary counter techniques in his limited repertoire.

In the little known styles of Wing Choon Kungfu, including Choe Family Wing Choon, there are many other unarmed sets and weapon sets in addition to those practiced in the popular styles.

In Choe Family Wing Choon, for example, the three unarmed sets of Siu Lim Tou, Cham Kiew and Phew Chee of the popular styles, are incorporated into one set, Siu Lin Tou. There are about a dozen other unarmed sets, like Flower Set, Tiger-Crane, Battle Palm, Choy-Li-Fatt, Drunken Eight Immortals, and Essence of Fighting.

These extra sets, by a big number, are sufficient to off-set the weakness experienced in the popular Wing Choon styles. If a Taekwondo exponent executes kicks at a practitioner of Choe Family Wing Choon, for example, the Wing Choon practitioner can apply techniques from other sets to overcome the kicks. If a group of assailants attack him, he can apply techniques from Choy-Li-Fatt or Drunken Eight Immortals to overcome them.

The limited weapon sets in the popular styles of Wing Choon is also a strength and weakness. Like in unarmed sets, as there are only two weapon sets, it gives practitioners more time to enhance their skills in these weapons. The Six-and-Half-Point Staff has become a very formidable weapon.

On the other hand, it is also a weakness because practitioners have no chance to explore other weapons. Not only understanding other weapons will enhance performance in the butterfly knives or long staff, if a practitioner chooses that as his choice weapon, but also it will enhance other aspects of his unarmed kungfu, and by extension in his daily life.

After the Special Wing Choon Course in Penang in 2010, we were generous enough to post some videos on YouTube revealing some secrets of Wing Choon. Some critics under the cloak of anonymity ridiculed our videos in the public comments saying that our counters were useless. Some complained that ours was not Wing Choon Kungfu.

An instructor in our Free Sparring Competition Committee traced the real persons behind the anonymity and invited them for some free sparring with our students to see whether our counters were useless. Despite the big talk of the critics, no one took up our invitation. Our instructor also found out that the one who made the most noise, especially regarding our counters against kicks, was a student of his junior during his Karate days before he joined Shaolin Wahnam.

We walk our talk. We do not challenge others, and we respect their right and privilege to practice whatever they like in whatever way they like. But if anyone ridicules and challenges us, and as scholar-warriors after making sure we can beat him in a fight, we shall accept the challenge. I have mentioned this a few times, and would take this opportunity to repeat. Any student or instructor representing our school in a challenge, must not be afraid or be hesitant in hurting his opponent drastically, even fatally. It is a challenge, not a friendly match. We must of course make sure that there will be no legal implications afterwards.

Those who say that our Wing Choon is not Wing Choon are only showing their lack of exposure. It may not be the Wing Choon they practice, but it is certainly Choe Family Wing Choon. 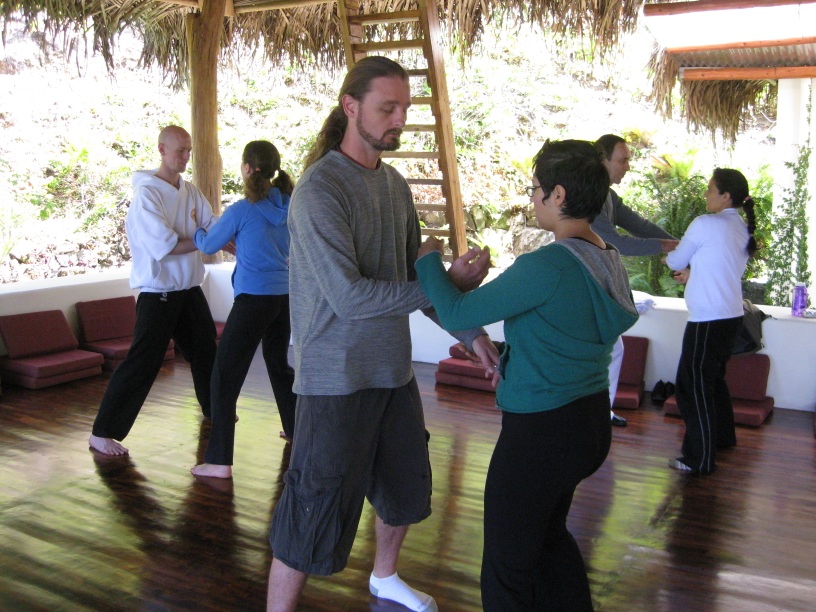 Wing Choon Kungfu is well known for the small-sized against bigger, stronger opponents