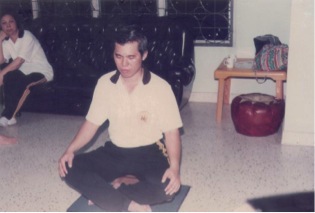 After sending chi from Shaolin Wahnam Institute in Sungai Petani, I described to the witnesses what I thought were the movements of the recipients in Kuala Lumpur. I could know their movements as I saw them in my mind during the distant chi transmission. I would say, for example, that a man near a door was bending forward and backward, and a woman in a blue dress was rolling on the floor. Witnesses in Sungai Petani then telephoned their counterparts in Kuala Lumpur to check if my descriptions were correct. It was found that I was about 75% correct in my descriptions.

To transmit chi to the volunteers present, I requested to be taken to another part of the city, but the organisers said that it would be sufficient if I transmitted chi from another part of the building. It was very successful. A group of about 30 volunteers, most of whom I had not seen before, and some I believed did not practise chi kung, had a chi flow, some vigorously, from my distant chi transmission.

Actually, it did not matter how far the distance was between me and the recipients. Once, I did a simple experiment in a multi-national corporation I taught in Bayan Baru, Penang. This corporation had some very sophisticated instruments that measured time precisely. A senior manager of the corporation contacted a colleague in the headquarters in the United States. This person in the United States was to receive chi transmitted by me from Penang. At the same time, I was to channel chi across a space of about ten feet to the senior manager in the same room as I was.

Both of them recorded the time they received chi from me on some very sophisticated instruments that measured time precisely. I sent chi to both of them at the same time, to the senior manager about ten feet in front of me using my palm in a physical manner, and to his colleague half a globe away using my mind in distant chi transmission. We repeated the procedure a few times. It was discovered that every time the senior manager received chi a friction of a moment later than his colleague. I did not time myself, but I reckoned that the person half a globe away received chi the same time I sent it. 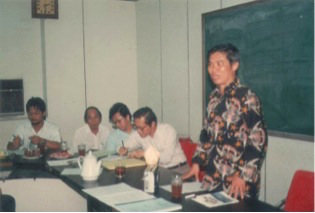