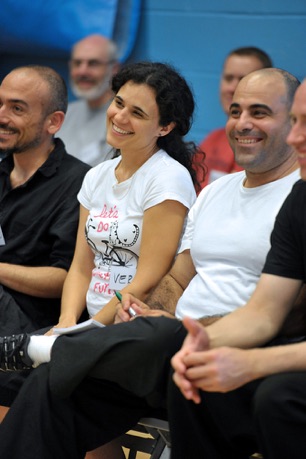 Having good thoughts contributes much to spiritual growth

Please correct me if I am wrong, but I believe Sinew Metamorphosis was not formally a part of Sigung's past training with Sitaigung Ho Fatt Nam and Uncle Righteousness.

How did Sigung so successfully acquire the skill of Sinew Metamorphosis?

Prior to officially joining the school, I was following the instructions that Sigung provided earlier to flick fingers 49 times. After Sigung improved his methodology to flicking only 3 times and announced so publicly, my practice also seemed to advance powerfully even when I wasn't part of the school yet!

Can Sigung's improvements in teaching also be transmitted to students without face to face learning?

Can Sigung please describe the daily benefits of nourishing energy for spiritual growth?

You are right. I did not formally learn Sinew Metamorphosis from any of my sifus, including Sifu Ho Fatt Nam and Uncle Righteousness.

I also did not learn the complete set of Eighteen Lohan Hands from my sifu. Sifu Ho Fatt Nam. I only learned a few patterns, like Lifting the Sky, Separating Water and Big Windmill. When I politely asked my sifu whether I could learn the remaining patterns, he told me it was not necessary, and that I should focus on my kungfu.

I still recall my sifu saying, “Eighteen Lohan Hands were for monks who were sick or weak to recover from their sickness and become strong. You are already healthy and strong.”

But I was very passionate over what our First Patriarch, the great Bodhidharma, taught at the Shaolin Temple. So, especially after I graduated from Sifu Ho Fatt Nam’s school, I researched into and read up as much as I could about the three arts purportedly taught by our First Patriarch – Eighteen Lohan Hands, Sinew Metamorphosis, and Bone Marrow Cleansing.

In an interview with his students, which was clearly recorded in Shaolin and Zen literature, Bodhidharma mentioned that Hui Ke had attained his highest teaching, which was transcendental, and figuratively described it as attaining the bone marrow level. Bodhidharma passed on his robe and bowl to Hui Ke and named him as the Second Patriarch.

At first, for quite a long time, I practiced Sinew Metamorphosis at a physical level. I started with one pattern, and performed it for a comfortable number of times, usually about 10 or 12. Eventually I could perform all the 12 patterns, each pattern for 49 times.

Why did I stop at 49? Why didn’t I progress beyond that number? This was simply because that was stated in the classics. I was a good student. I followed instructions precisely, whether they were from a living teacher or from an authoritative book. It was not because I was subservient. Actually I was smart. I had discovered long ago that by following the instructions of a good teacher or a good book, instead of trying to be smarter than them, I would get the best benefits.

An important development came about when I exchanged some arts with my childhood friend, Sifu Chow Kok Chee, who was teaching Choy-Li-Fatt Kungfu in Kuala Lumpur. Years ago when I was training with Uncle Righteousness, I heard of an exclusive and powerful internal art from Ngok Ka Kungfu (the family style of Yue Fei) called “Thiew Hang Kung”, or literally “Art of Suspended Training”.

One of Sifu Chow Kok Chee’s god-fathers (he had a few) was the Ngok Ka patriacch, Loong Poh, the elderly master who at over 70 broke both legs of a Taekwondo master by walking into the latter’s flying kicks. So I asked Sifu Chow Kok Chee to teach me “Thiew Hang Kungh” which he had earlier learned from his god-father.

“Thiew Hang Kung” consisted of a set of a few stationary exercises which were all quite similar. One of these exercises was exactly the same as the exercise called “Reaching Up” in Sinew Metamorphosis. It was a very powerful exercise, and I developed a lot of internal force from it.

But the greatest improvement occurred when I had started teaching. Here is one of many justifications of my advice that we learn a lot when we teach. Many of the factors that contribute to my tremendous improvement in Sinew Metamorphosis are general in nature, applicable to all internal force training, like being totally relaxed, not thinking of anything, generating energy flow, being spontaneous, and accumulating energy at the dan tian.

It is indeed amazing that Sinew Metamorphosis has progressed from performing each of the 12 techniques 49 times in more than half an hour to just flicking fingers 3 times in 5 minutes, and producing much more internal force and mental clarity. It is even more amazing that I can transmit the skills to deserving students.

I am glad of your own improvement in Sinew Metamorphosis even before you joined our school. Sinew Metamorphosis is a difficult exercise even performed at a low level. You improvement on your own indicated that you were wise to follow instructions from an authority precisely. Others who try to be smart and practice the exercise the way they think it should be practiced, instead of following authoritative instructions, are likely to harm themselves.

There is an on-going theory about heart-to-heart transmission, called, interestingly, the theory of 100 monkeys. Some monkeys discovered by accident that if they washed away the sand that stuck to some bananas, the bananas would taste better. Seeing this, other monkeys followed and found their bananas taste better. If more than 100 monkeys did this, monkeys elsewhere which had no visual connection with the events of washing bananas, would have acquired this knowledge, and they too would wash their bananas off sand before eating them.

Scientists do not know why this happens. They also do not call it heart-to-heart transmission. But with the advantage of our teaching, we know this has something to do with our mind. And our human mind is certainly more powerful than monkey’s mind. Hence, it is very important that we must always have good thoughts.

Having good thoughts is an excellent way to nourish energy for spiritual growth. We can generate a lot of energy using Sinew Metamorphosis. Or, as we understand that depending on our purporse, “a lot” may not necessarily means “better”, we may use a less powerful exercise to generate less energy, but still more than enough energy for our purpose.

For example, you wake up in the morning. First you practice a simple exercise like Lifting the Sky for about 10 minutes to generate some energy. You have good thoughts, thinking that the energy will make you lively. Then you have your breakfast. Irrespective of what your breakfast is, you are more likely to enjoy it than if you had evil thoughts.

Next, you go to work. You have good thoughts. Irrespective of what your work is, you feel grateful that you have a job. You intend to do your job well. You look forward to your work. It is more likely that you will enjoy your work than if you had evil thoughts.

For comparison, suppose you had evil thoughts. As you wake up, you think what a burden that day is going to be for you. You practice your chi kung, and intellectualize whether you are doing it correctly. When you have your breakfast, because of your evil thoughts, it is likely you will not enjoy it than if you had good thoughts.

As you go to work, you harbor evil thoughts. You feel that you should be going for vacation instead of going to work. You feel angry at your work. You feel indifferent to it, and do not care whether you are going to do your work well. Because of your evil thoughts, even though your breakfast and your work are the same, the effects on you will be harmful spiritually, like making you depressed or angry.

Irrespective of whether you are a computer technician or a computer tycoon, having good thoughts will nourish your present spiritual growth, like being peaceful and happy, and having bad thoughts will contribute to your spiritual decay, like being depressed and angry. If you practice Sinew Metamorphosis, which produces a lot of energy, it is more important that you have good thoughts.