REFLECTIONS ON MY EXPERINCE 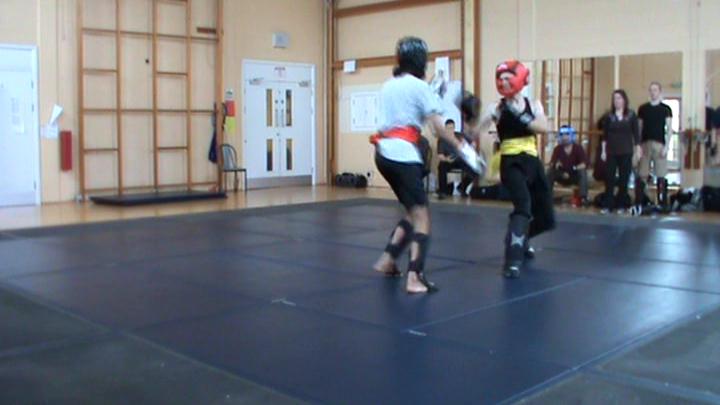 Jas versus Richard in the San Shou Competition

Hi all, I'd like to present some thoughts on my experiences yesterday and in recent training for combat in general.

Restoring The Glory of Kung Fu

I've mentioned before in this thread that I have no interest in entering competitions outside the school. However I know that there are those that do. I had two reasons for deciding to enter the Wahnam San Shou competition this year.

There is a long standing tradition in Wahnam of not using gloves or protection in our practice and there are many threads and information on Sitaigung's website and Q&A which explain why we don't use them. However in restoring the glory of kung fu my experience is that if brothers and sisters are going to enter external competitions to prove that kung fu can be used against other styles, then there is a absolute necessity to practice using other styles' rules and equipment.

For the last six months I have been practising about 50% of the time with gloves on and without this preparation it would have been significantly more difficult to adjust to full contact sparring yesterday. The experience of someone coming at you full throttle directly at the head with gloves on is totally different to someone coming at you full throttle gloveless and stopping an inch short or ging past your head above, to the side or giving you a gentle tap.

My experience was that although fighting without protective gear means that the 'threat' level is on one way 'higher', we also have to be much more controlled and safe and from my years of experience in Wahnam, this has built up into a level of 'trust' that I won't get hit (at least not intentionally) and this in turn has meant that I never really learned what it was like to be in a real combat situation with a level of threat which could result in a hard punch to the head. Throws yes, techniques and tactics yes, skills and force and flow yes, but actually getting hit and kicked hard, no.

Now, there's no way I'd enter a bare knuckle fight at full force with the threat of real hits to the head -- so to test my skills in this environment, the safety gear is essential.

But is it still real kung fu?

Well, clearly there's some things that have to be dropped when you put on the gear. Certain hand forms, techniques, grips and stikes become impossible and some tactics less simple to apply. This is a given.

And the rules of a San Shou tournament also mean certain things aren't allowed. So the restrictions mean you can't 'test' the full range of things we learn in Wahnam. But if you look a bit deeper, you are still testing a good deal of the skills that we have in our system:

Shen / staying at dantien
Scholar warrior mind
Use of stances
Three arrivals (heart/mind, feet, hands)
Strategy and tactics - hard against soft, soft against hard
Crossing the bridge / chasing the shadow
Blocking, leaning, floating opponents attacks
Neutralising throws
Footwork
USE OF COMBAT SEQUENCES!
...... the list of skills could go on and on....

So as far as I am concerned it's still the kung fu we know and love, even if all the aspects can't be used or tested. It still provides a very real and pressured environment in which to test the skills. I certainly wouldn't want to see gloves/protection being used as standard in our school but in certain situations I think they can be useful in a 'testing' environment.

That level of threat that is created with gloves on actually makes you appreciate just how hard a bare knuckle Black Tiger would be or a full force White Snake.... phew, I wouldn't want to be in front of one of those. One Hang Golden Star to the temple and it would be proper 'game over'. I don't think I really appreciated this before, until taking a few real belters to the head with gloves and headguard.

Why would I want to get kicked and hit?

In all honesty this was not the reason I got into kung fu, I am much more interested in overcoming illness (achieved), being healthy and happy 100% of the time (well on my way!), having mental clarity and being able to negotiate my daily life more effectively (yes regularly!) and experiencing spiritual awakening and joys (I have frequent glimpses ).

I realised this year when the aims for the school were set, that I'd never really tested my skills in a pressured combat situation and this was after nearly seven years of being a part of this amazing family.

If I get kicked and punched have I failed in my training? The simple answer for me is "no, of course not". It simply proves that there are areas to practice more. There is of course a sliding scale of skills and abilities within our school. Inevitably I knew I would be more combat efficient than some and less than others, or perhaps better specifically at some things and worse at others.

Yesterday I lost two fights and won one. In all, I was hit and kicked. It hurt. Did I feel I failed? Not at all -- I was able to defend myself better against some people than others and against some types of attack more than others -- but one thing is for sure; I can now say, for the first time in seven years, that I can truly measure my progress in being able to defend myself compared to the first day I started in Wahnam.

I wouldn't like to do this type of thing every day, or even every month, but I have a feeling I will enter whatever competition is on offer next year and test my skills again to see how I'm doing. Hopefully I will be able to report improvements. Maybe one day I'll be able to defend myself against anything that comes at me! And as Sitaigung said many times over the last week, "if you train kung fu for 20 years and only use it once to defend yourself, your family or a loved one then it is worth it.

I found it incredibly difficult to stay at my dantien. I'd done a lot of talking beforehand about trying to 'play' and remain joyful and happy within combat situations. I have to admit as soon as I failed to block my opponents first punch and I got hit and then kicked and everything was moving so fast, I forgot all about playing and having fun.

It was a fight. It was quite scary. It's a very very strange experience to switch from standing next to your brother and giving him a hug and a smile just seconds before a fight and saying "have fun" to basically trying to knock each other block's off. Very strange indeed. Part of this experience sits uncomfortably with me. It's new, and unfamiliar.

Sitaigung said that the competition was much improved from last year's Ten Tigers competition with students using more stances and more combat sequences. He said however there were opportunities for us to improve further of course...

And was it a good example of our compassionate art of kung fu?.... that's an interesting question and one I'd like to open up to the forum. I'd really like to hear others' views on what I've posted.

For someone who has never, ever hit anyone in my life it was an enlightening experience for me (there were a few slow motion moments where I could see my own fist landing directly and forcefully on it's target and this was very, very strange and a bit uncomfortable).

I am happy to have tested my skills in being able to defend myself and I know what I need to work on (a long, long list before next year comes around!). It's given me much food for thought as well, but what do YOU all think?

Smile from the heart 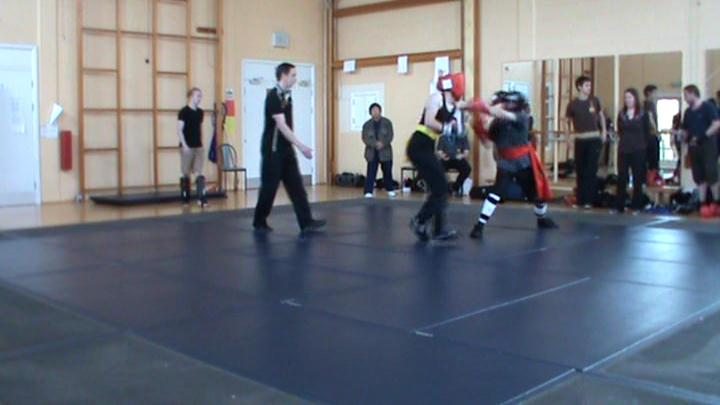 Richard versus Tim in the San Shou Competition