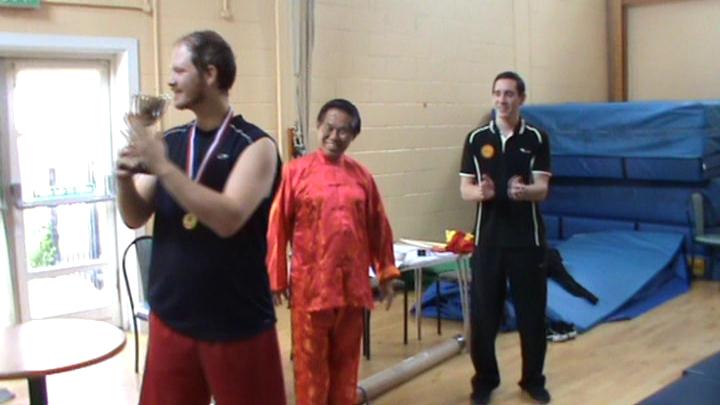 Chris Didyk, who was an international champion before, emerged as Champion in the Middleweight Disision of the San Shou Competition

This is an interesting discussion. I have a lot to say, so I'll focus this post on my general experience at the tournament.

Yes, I believe the way we fought at the tournament was compassionate and the force level was good/appropriate. I also suspect that the folks who were in Oslo in January (but weren't able to make it to the san shou tournament) are reading these responses with a sense of deja vu, having gone through a similar progression of understanding what it really means to increase the threat level, and why it's sometimes hard and uncomfortable, but necessary if we are to get the full benefits of our training. I know I did.

I have massive respect for everyone who took part in the tournament. The competitors all showed that they have so much courage and dedication to achieving combat proficiency that they are willing to put themselves in uncomfortable and sometimes unpleasant situations to gain the benefits. As a result, I have no doubt that we will be rewarded with the benefits we seek, and they will be worth many times whatever difficulties we have to overcome to get them. This is the stuff that masters are made of.

For those who don't want to compete in such tournaments, that is of course your right. But if I were you, I'd seriously examine why. I suspect that for many of us, it's less about the tournament aspect and more about the threat level. I'm sorry to disappoint you, but we have to work up to realistic threat levels whether we're training for tournaments or not. Some of us may take more time to do it than others, but if you're training Shaolin Kung Fu or Taijiquan and are not committed to gradually progressing on that front, you have bigger questions you need to ask yourself (and perhaps your Sifu). This doesn't mean that we have suddenly changed away from a school of kind and compassionate brothers and sisters who do our best to help each other progress. As others have noted, the tournament was a powerful example of how we can do both.

I think that while the main issues that come up from sparring at the level we did at the tournament can be singularly described as "threat level", it may be helpful to split them up into the following pieces: force level, injuries (from the sides of both the giver and the receiver), and seriousness/lack of fun/competitiveness.

First, the force level. Those I talked to during the week before the tournament can attest to my initial nervousness about it and my struggle with the idea of using knockout-level force against my fellow Shaolin Wahnam family members. I ultimately decided that if I were to hurt my sparring partner, that I wouldn't seek a knockout, but would try to use that opportunity to fell or push him out of the ring.

I don't know if it was evident during my matches or not, but I never had the intention of trying to hurt or knock anyone out. What I did have the intention of was to use enough force to stop my sparring partner from coming in on me to push me out of the ring. I had to use quite a good amount of force to do that, but I got valuable confirmation that I could do it successfully at times, and that I have more force in my strikes than I expected. That's particularly true for Hang a Golden Star, which has never felt particularly powerful in solo training or partner work without gloves. I was honestly surprised the couple of times that I knocked my sparring partners back with solid strikes! I've also found that receiving forceful strikes provides good confirmation of when taking a strike stops you and when it doesn't.

Next, injuries. Our standard for what is an injury and what isn't is a bit different from what most people in Western culture assume. This is something Sigung clarified as a result of the Winter Camp in Oslo. By our standard, no one was injured at the san shou tournament, even though some competitors were in some pain and were treated by Sigung. Our standard of injury is more along the lines of something you would need to go to the hospital or receive days or weeks of treatment for, like a broken bone or a torn tendon. Chi flow and internal force are pretty amazing in their restorative and protective qualities, even if they aren't always immediately 100% successful within minutes. I think Sigung would consider it reasonable (and not serious) if you took a strike that required a few days of good chi kung to fix up. If you think about it, it's pretty amazing to have a tool like that at our disposal!

I still remember the first time I accidentally struck someone while sparring with kung fu. It was a dragon hand to just above the eye of my classmate, Adam Bailey. He had done the same to me a month or so previously, and I honestly felt far worse about striking him than about being struck by him. That said, I have no guilt about any of my strikes at the tournament nor any anger about any strikes I took. I think the other competitors all feel this way, too, and if they don't, they should! While I would rather not cause anyone pain, I know I didn't seriously hurt anyone, and I realize that feeling guilt-free about striking someone doesn't mean that I'm not compassionate.

Seriousness/competitiveness/lack of fun. I can honestly say that the few times I have padded up and sparred with the gloves, I have had to force myself to do it. It hasn't been fun in the moment, but afterwards, I've always benefited from it tremendously. In fact, the main reason I competed in this tournament was because I knew I'd have more regret if I didn't than if I did. I felt a huge sense of relief when it was all over, but already, I can see that I've benefited tremendously from taking part. The feedback of what worked for me and what didn't, gained from a realistically threatening situation, is as priceless as it is definitive.

Increased threat level doesn't have to mean "no fun". I think we all enjoyed the last session of the Baguazhang course, even though we upped the threat level, and that was without the benefit of months of gradual progress. Even when learning the sequences, Sigung stressed that we must always have good force, form, and intent. When we're first working through a sequence, it's ok to go slower, but we should continuously up the force, flow, and threat to the edge of what our partners can handle until we reach realistic levels. Right now, that feels intense because many of us aren't used to it, but I suspect that once we get comfortable with it, it will be just as fun as it currently is to do sequences with low threat. Keep in mind that one of Sigung's old nicknames was "The Smiling Tiger"! 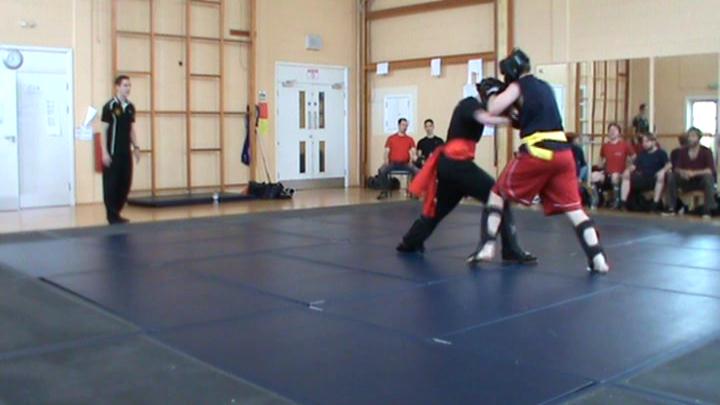