FIVE-ANIMAL PLAY AND OUR CHI FLOW

In your outstanding book “The Complete Book of Chinese Medicine“, you share Liang Shi Feng’s instructions to the Five Animal Play which consists of pressing two major energy points and extensive visualization. Will the Five Animal Play you are going to teach be a crystallization and easier to perform, as usual?

Besides the obvious technical difference, is there a difference in the outcome between Five Animal Play induced by visualization and practicing a set of 3 exercises like we do to induce self-manifested chi-movement?

What diagnostic findings can a chi kung healer draw from observing a student’s chi flow movements? Should he prescribe exercises focusing on the specific organ manifested in the spontaneous movements afterwards?

In the past, people thought that Hua Tuo observed the movements of the bird, the deer, the monkey, the tiger and the bear, and taught these movements to students or patients. This is the main approach of teaching Five-Animal Play today.

I have a few books on Five-animal Play, and all of them adopt this approach. However, I found that the patterns looked quite alike. Patterns showing bird movements, for example, are not very different from patterns showing deer movement.

I recalled a similar scenario in patterns showing different animal forms in the Shaolin Five Animals of Shaolin Kungfu. Patterns showing dragon movements, for example, are not very different from patterns showing snake movements. Later I discovered that it was the inner spirit, and not the outward forms, that are important. In other words, although the outward forms of the dargan and the snake are alike, their inner spirit is different. The dragon spirit trains mind whereas the snake spirit trains energy.

Recent archaeological discoveries in China gave a different approach to the Five-Animal Play. The discoveries suggested that the different animal forms referred not to the exercises Hua Tuo taught patients or students, but to the chi flow movements as a result of performing the exercises. Hua Tuo might teach a same exercise to a group of patients, but depending on their body constituents due to their illness, the resultant chi flow movements were different.

There were countless different movements, but all of them could be generalized into five representative types, symbolized by the bird, the deer, the monkey, the tiger and the bear. This is the approach we use in our school.

Yes, the Five-Animal Play I am going to teach will be a crystallization of these two approaches. I intend to choose, or devise if appropriate exercise are not ready available, exercises that resemble movements of the five animals. These exercises have not been taught in our school before.

As a result of performing these exercises, course participants will have a chi flow. We shall examine what categories of the five animals we can classify these chi flow movements, and examine whether these resultant chi flow movements have any relationship with any disease the participants may have, and with the type of exercises they performed. Not only it will be fun, it will also add to the body of knowledge concerning the Five-Animal Play. The course may create history.

Yes, there should be a difference in the outcome between the Five-Animal Play induced by visualization and a set of three exercises we use to induce self-manifested chi movement. This is because the mind, operated by visualization, is the most important factor influencing the type of chi flow. We shall assess this relationship between the mind and the chi flow movements in the coming Five-animal Play course.

There should also be a difference in the chi flow between using exercises that imitate movements of certain animals and using general exercises without any reference to the animals. This is because the type of exercises we perform also influences the type of resultant chi flow. Again we shall access this relationship during the coming course.

A skillful healer can have a good idea of a student’s health problems by observing the student’s chi flow. This is because chi issuing from different organs and meridian will result in characteristic chi flow movements.

Hence, by observing a patient’s chi flow movements, a skillful healer can know what organs or meridians are affected, and therefore what illness is involved. For example, if a patient moves like a bird, but does not have its vibrancy or lifelines, the healer may suspect that the patient’s heart, small intestines, heart meridian or small intestine meridian is involved.

The healer may prescribe exercises focusing on the patient’s respective organs and meridians. In this example, he may focus on the patient’s heart, small intestines, heart meridian and small intestine meridian. But he must not neglect other possibilities, like the symptoms may be manifested in these organs and meridians, but the root cause may be somewhere else. He must also be on guard that his judgment may be wrong.

These setbacks are not present in our chi kung healing! In our situation, once we help a patient generate a chi flow, the chi will automatically flow to where it is needed most urgently! We do not even have to make a diagnosis; we just have to get the patient have a chi flow. This may sound ridiculous, but it is true. We have used this philosophy to help countless patients overcome so-called incurable diseases.

The questions and answers are reproduced from the thread Hua Tuo’s Five-Animal Play - 10 Questions to Grandmaster in the Shaolin Wahnam Discussion Forum. 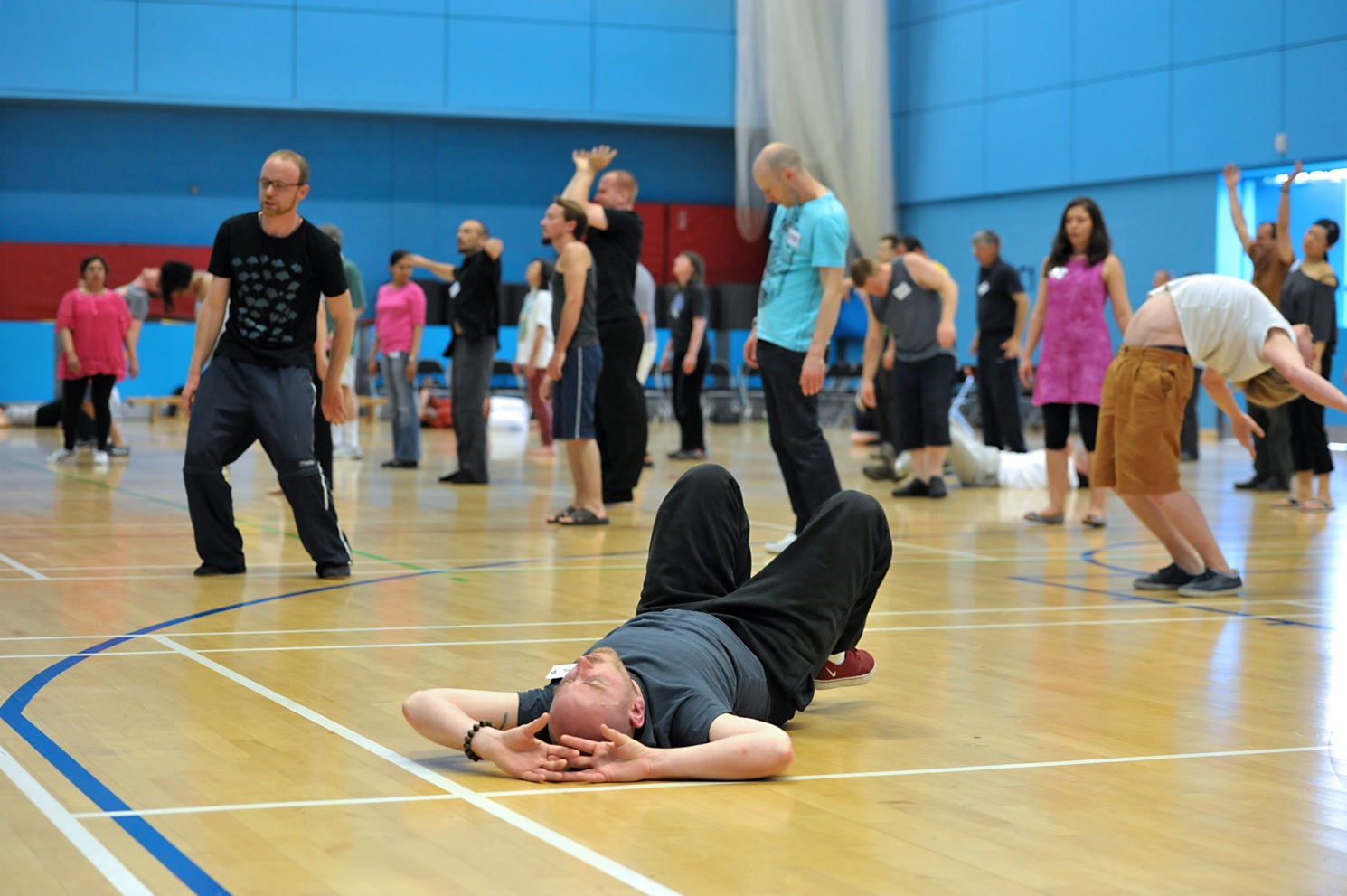 A chi flow session at the UK Summer Camp 2013. Can you identify movements resembling a bird's, a deer's, a monkey's, a tiger's and a bear's?