THE UNBELIEVABLE FEATS OF STRIKING ACROSS SPACE WITHOUT CONTACT 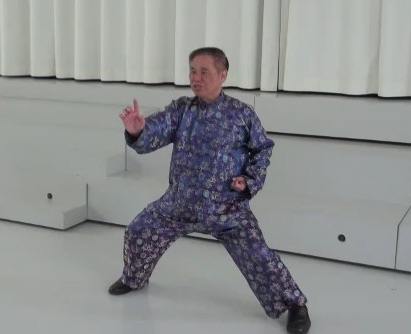 Is Cosmos Palm closely related to the arts of Strike-Across-Space Palm, "Kak San Ta Ngow" or "Hitting a Buffalo through a Mountain", and Diamond Palm; and if so are these natural progressions from the development of skills in training our palms, or do they require specific separate training?

Aside from these arts/progressions, what is the ultimate potential for training Cosmos Palm in martial and healing application for a master who specializes in it over many, many years?

Also, if Sifu would be willing, could you share an experience or two of how Sigung Ho taught you this art or how Sitaigung Yang Fatt Khun taught him?

Thank you Sifu, for absolutely every incredible opportunity and generous teaching!! I very much look forward to both the exciting answers to the questions here and, of course, the experiential answers that will come with the courses in October!

It is useful to realize that kungfu terms are for convenience. They are different from scientific terms which are definitive and restrictive. Hydrogen dioxide, for example, is always hydrogen dioxide, though it may appear in its usual liquid form as water, vapour form as stream, and solid form as ice.

It is definitive as it defines that it is composed of an atom of hydrogen and two atoms of oxygen. Hydrogen dioxide, or water, is restrictive as other things, like sodium chloride, which is common salt, or ferrum, which is iron, are not water.

But Cosmos Palm is not definitive or restrictive. It does not define what exactly it is made of. Other types of force or skills can be quite similar to Cosmos Palm. There are different ways to train Cosmos Palm, and it can be used differently. Indeed, the term, Cosmos Palm, is particular to our school. In other schools, it is often called Red Sand Palm.

Why, then, is it called Cosmos Palm? In what ways are Cosmos Palm different from other types of palms, like Iron Palm and Cotton Palm.

In Cosmos Palm training in our school we perform Pushing Mountain to generate energy flow, then we perform Forceful Big Windmill to consolidate the flowing energy. Other schools may use different training methods.

At a very advanced level, Iron Palm can be very soft, and Cotton Palm can be very hard. When Sifu Gu Ru Zhang, a famous Iron Palm master, struck a horse, which a foreign master brought in to humiliate kungfu, he gave it a gentle tap without leaving any external mark. The horse collapsed and died immediately. His Iron Palm, which is very “hard”, had become Cotton Palm, which is very “soft”.

With this background understanding, the answer to your question becomes meaningful.

The strike by Piti (Sifu Piti Parra Duque) on Dr Juan on the Blue Mountain some years ago was an example of “Strike-Across-Space Palm”. Piti stopped his punch a few inches away, but his internal force fractured Dr Juan’s ribs. On another occasion, my “dim mark” on Piti was another example of “Strike-Across Space Palm”. I stopped my sword-finger a few inches in front of Piti’s throat, but it choked PIti and made him dizzy. He had to perform “Lifting the Sky” to relieve the damage.

It is interesting to note that Piti used his vertical fist, and I used my sword-finger. We didn’t use our palms. Were those examples of “Strike-Across-Space Palm”? The answer can be “yes” or “no”, depending on ones’ perspective. Kungfu terms are for convenience. But personally, I would consider Piti’s strike as an example of Marvelous Fist, and my strike as an example of One-Finger Zen. One-Finger Zen, Strike-Across-Space Palm, and Marvelous Fist are regarded as the three ultimate arts of kungfu.

The meaning of “Hitting a Buffalo Behind a Mountain” is figurative. It is not rally a buffalo behind a mountain. The art refers to striking opponents behind some objects. Again the distance may vary, but it is almost never in terms of miles.

I could think of two examples at random.

Many years ago a few of my disciples and I were invited by the Moral Up-Lifing Society in Taiping, Malaysia to demonstrate dispersing clouds in the sky. When we were asked about chi, we gave an impromptu demonstration before the main cloud dispersing to the public. Office bearers of the Society were invited into a room. Leong, one of our chi kung instructors, went into an adjacent room and transmitted chi to them, causing them to have a chi flow. Having a chi flow was a first to all of the office bearers. Having chi transmitted to them across a wall was another first.

Was the experiment on dispersing clouds successful? Of course, it was. We are scholar-warriors. We do things when we know we can be successful. You can read about cloud dispersing in my autobiography, “The Way of the Master”.

The next example of “Strike-Across-Space Palm” was more like striking, but it was with One-Finger Zen, and not with the palm. It was in Portugal. I lined up 7 volunteers, and told the class that I would shoot chi pass 5 volunteers to hit the sixth. I stood a few feet in front of the line and aimed my One-Finger Zen at the volunteers. The sixth person sprang a few feet away. He happened to be Luis (Sifu Luis Morgado), our expert in intelligent robots. He did “Lifting the Sky” to generate a chi flow to remove the injury.

After the chi flow, Luis told us that he felt like a sharp knife piercing into his heart. You can ask Dr Riccardo Salvatore or Luis to tell you the details. Or you can read about the feat in my autobiography, “The Way of the Master”.

Vajra Palm is a secretive art. Its hard, external training is similar to that of Iron Palm, but it also consists of a lot of internal training. Some high level Lama Kungfu masters have Vajra Palm.

Cosmos Palm refers to a special type of training. Although there may be different methods, the general principles are similar. The principles involve generating powerful energy flow and consolidating the energy. The palms of Cosmos Palm masters are soft and gentle.

Strike-Across-Space Palm and Hitting a Buddalo Behind Mountain refer to application. In Strike-Across-Space Palm, a master can injure an opponent without physical contact, and from a distance. In Hitting a Buffalo Behind a Mountain, a master can injure an opponent with obstacles in between, usually without harming the obstacles. These two applications are similar, but not the same.

Generally, it is a matter of progression. At an early stage, a practitioner may perform Eighteen Lohan Hands to generate an energy flow. At an advanced level, he may use Eighteen Lohan Hands for Bone-Marrow Cleansing. At an early stage, a practitioner may use Cosmos Palm to injure an opponent on physical contact. An an advanced stage, he may injure an opponent from a distance, or with obstacles in between, as in Striking-Across-Space Palm and Hitting a Buffalo Behind Mountain.

But this progression is not always so. At an advanced stage, a Cosmos Palm master may not use his Cosmos Palm to injure opponents at a distance or behind obstacles. Most probably he did not know the methods. But sometimes even when he knows the methods, he prefers not to.

Hence, it requires special methods to do so, besides being advanced in the art. It is simply incredible that at the Cosmos Palm course in New Hampshire in October 2016, course participants not only learned the rare skills of Cosmos Palm but also the methods to “hit a buffalo behind mountain”. Due to the short time available, they might not be very skillful yet. But if they keep practicing, they will be successful. More importantly, Cosmos Palm gives them good health, vitality, longevity, peak performance and spiritual joys.

All internal force training also gives us good health, vitality, longevity, peak performance and spiritual joys. But most other internal arts do not give as much benefit in all these respects as Cosmos Palm.

I would take this opportunity to mention a very important point. These benefits of good health, vitality, longevity, peak performance and spiritual joys are wonderful, and naturally many people would like to train internal force to have these wonderful benefits. But internal force has to be learnt from a master, at least a competent instructor. If one learns internal force from books or videos, it is likely to bring harm rather than benefit.

I don’t know how my sigung taught my sifu Cosmos Palm, but the story of how my sifu taught me Cosmos Palm is quite well known by now amongst many in our Shaolin Wahnam Family.

My sihengs, or senior classmates, were training Iron Palm, which was a secretive art, though now we call it a buffalo’s art. I trained Iron Palm on my own from a book for about 2 years, yet could not break a brick though the book mentioned that the training would enable a practitioner to break a brick in 100 days. I believe this claim was true because real master never lied, and the author of this hook was a well known real master.

So I asked my sihengs whether I could join them. I did quite well in hitting a bag of iron-filing, but from a corner of my eyes I saw my sifu, Sifu Ho Fatt Nam, approaching. I thought I would get a scolding from my sifu. I didn’t ask his permission, I only asked my sihengs. But my sifu smiled and nodded. Then he asked me to show him my hands.

My heart sank. I thought I had lost an opportunity to train Iron Palm.

Then my sifu continued, “I’ll teach you Cosmos Palm.’”

He led me aside from my sihengs, and asked me to perform Pushing Mountain.

After a few repetitions, my sifu said, “That’s good. Now practice this every day.” Then he walked away.

I was a good student. I practiced Pushing Mountain every day, always without my sifu watching.

After some time, my sifu asked me, “How is your Pushing Mountain?”

“I practice it every day as Sifu has instructed,” I answered. I showed him Pushing Mountain.

“Very good,” my sifu said. “Now, I’ll teach you the next step.” He taught me Forceful Big Windmill,

It was not called Forceful Big Windmill then. I gave it a name because the movement resembled a pattern from the Eighteen Lohan Hands called the Big Windmill, which is performed gently. The movement my sifu showed me was performed with internal force.

“Practice it every day,” my sifu said. Then he walked away. 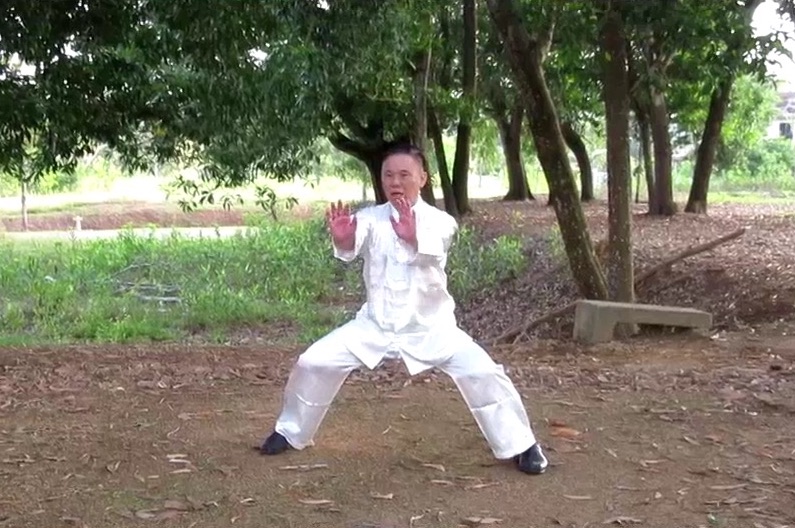