NON-RESISTANCE AND MOVING IN STANCE 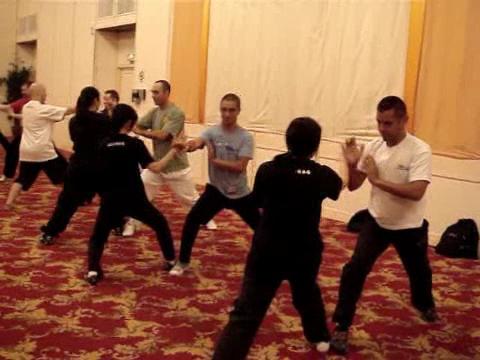 Pushing Hands is an ingenuous way to practice non-resistance

The following discussion is reproduced from the thread Intensive Taijiquan in Malaysia September 2008 started in the Shaolin Wahnam Discussion Forum on 14th September 2008.

I also will like to start a topic about NON RESISTANCE. i.e. do not resist the opponent's force. Yield first to overcome. Or as Sigung says, start late arrive early.

So now for me the word SURRENDER used many times by Sifu Rama and now by Sifu Piti has another dimension. If one surrender the movements become unconscious and what one might think is a vulnerability it becomes your true and essential invulnerability.

I think one way to increase the speed of moving will be to use the chi instead of using your muscles. 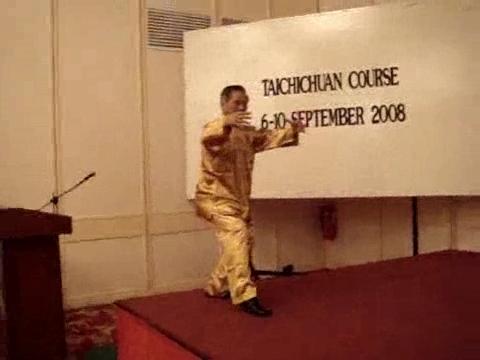 A good answer, but not exactly what I was thinking of. Also, when we use chi instead of muscles, we do actually move faster. I'm referring to two ways of refining our movements that were covered on day 1 of the course.

I agree it was a great course - certainly the highest level TaiChiChuan course I have ever taken.

It was very exciting to be part of it and to share it with so many Wahnam TaiChiChuan brothers and sisters.

If my memory is correct

1. Reducing the size of waste movement - So when we step simplifying the intermediate movements.

2. Reducing the number of steps.

I think I'll have to check my notes before answering question 2.

I would onlyadd that when considering reducing the size of the movement we can divide this process into three stages: big, medium and small movement.

When we move forward using big movement, an observer would be able to notice that the shoulders are moving (although of course the movement comes from the waist

In medium movement, the movement of the waist would be visible, but the shoulder movement would be more subtle.

In small movement, the shoulders and the waist would hardly appear to move at all, the main visible movement being at the knee.

Here's a lovely video series of Sifu explaining and demonstrating these levels as well as the other way of refining our movement which, as Peter posted above, involves reducing the number of steps.

It occurred to me that some of you might not be posting on this thread because you feel shy about answering my questions. Please do feel free to tell us about your experiences during the course, even if you don't want to have a go at the questions.

Enjoy your moving in Stances.