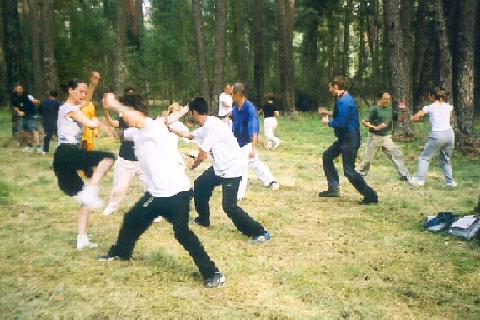 Students in a regional Shaolin Kungfu class at San Leonardo, Spain in August 2003 practiced sparring methodologically. Notice that all of them used typical kungfu patterns, including proper stances

This discussion by Anthony Korahais is taken from the thread Sparring Methodolgy posted in the Shaolin Wahnam Discussion Forum on 12th April 2003.

In practicing these combat sequences, there are important subsections of development:

The main reason students today fail to apply their kungfu is because they lack the appropriate methods to train sparring. It is easy to see why trying to jump directly from Step 1 (forms) to Step 7 (free sparring) will result in failure every time. Jumping straight into free sparring is a guaranteed way to make your sophisticated kungfu techniques feel useless.

I remember when I first started sparring in Karate. As a Green Belt, I was thrown into the mix against Black Belts. A soon as my Sensei said, "Hajimei" (Go!), I thought to myself, "Now what?" Needless to say, that Black Belt had his way with me that day. Later, when I was a Black Belt sparring against Green Belts, I remember looking at their faces and thinking, "They have no idea what to do." (Of course, it was much more fun being on the other side.) Though I did eventually learn how to spar, my progress was slow and haphazard.

Kungfu is not magic. It is scientific. You cannot expect these sophisticated movements to magically work for you just because you practiced them alone on the top of a mountain for 30 years. If students follow the prescribed methodology and practice sufficiently, they will find free sparring a natural progression. They will be able to apply their techniques spontaneously not because kungfu is magic, but because they have practiced according to a systematic method.

The results are remarkable. For example, while practicing Step 5 (variations on combat sequences) with one of my juniors (who has been practicing kungfu for less than 2 years), we naturally found ourselves improvising further and further outside of the prescribed sequences. By the end, we were closer to (but not at) free sparring. Anyone watching us would have no trouble recognizing our moves from the traditional forms that we practice. What we do looks like "kungfu fighting.” There is no bouncing, no boxing, no padding, no karate, and no taekwondo in any of what we do. It is all traditional kungfu.

I can give the traditional name for every move that I use in sparring. For example, a junior once tried to catch me with an unexpected move (Surprise Counter), but I spontaneously countered his counter with another surprise. He was, in fact, surprised and looked at me in shock as if I had made up some awesome new pattern. I had not. I'm not that clever. I pointed out that I had used a pattern that he already knows: "Sharp Knife Trims Bamboo." All I did was vary the stance from Bow & Arrow to Unicorn, thus varying the application slightly to fit the situation. I was still in a proper stance, and the pattern was still “Sharp Knife Trims Bamboo.”

Students in a regional Shaolin Kungfu class at San Leonardo, Spain in August 2003 practiced sparring methodologically. Notice that all of them used typical kungfu patterns, including proper stances.

There are also other reasons why fewer and fewer people can apply sophisticated kungfu patterns in sparring or combat. The most obvious is that they do not know, or have only a cursory understanding of the application. Some teachers even encourage students to figure out the application out on their own, as if solving some puzzle. I can tell you from repeated experience that the application you may imagine or figure out on your own is, at best, only one of many applications. It will likely also be the most unsophisticated one.

Furthermore, even if you personally witness the sophisticated application, you still may not "get" it. I witnessed, understood, and practiced the application to a particular pattern for over a year. I later felt the same pattern applied by Sifu Wong during sparring. What he did might have looked the same to others, but to me it was COMPLETELY different. It might as well have been a different technique. Don't get me wrong, I was not practicing the physical form of the move incorrectly. I just lacked the other skills required to make that physical form so effective.

The application of these patterns depends a great deal on these skills. Unfortunately, such skills are not easily seen. Many of these skills, even when felt directly from a master, still take years and years to perfect. Taijiquan Pushing Hands is a good example: it looks simple, and it is... in theory. But the skills, though simple, are invisible to the eye and take years to master.

This leads us to another reason why people fail to apply their techniques: lack of force. Force can be explained and applied in many ways. Internal force is not even necessary. A tiger claw will suffice here as an example of force.

Let's say you know a particular tiger pattern called “Fierce Tiger Descends Mountain.” You have learned the application and the necessary skills directly from the world's best master — Mr. Miyagi. Let's say you practice this move thousands of times. Mr. Miyagi is there every day to correct your mistakes. A year later, you are able to apply this pattern in sparring 80% of the time.

Even if you raise your percentage to 99.9%, you are still missing a critical ingredient. If you have not trained the force for your tiger claw, your technique is worthless. Why? Because this force is necessary to make this particular pattern effective. Though you may land the technique, you will only succeed in tickling your opponent with your tiger claw. This is why force training has always been an essential ingredient in traditional kungfu.

I studied Fu Jow Pai Kungfu (Black Tiger) for about 6 months. I once saw the master jab his left pinky finger into and through a thick, corrugated cardboard box lying on the street. He did it casually, almost jokingly, leaving a perfect hole through several layers of cardboard for us all to see. This guy trained force every day. It wasn't exactly the same as internal force, but trust me: you don't want a guy like this to grab you with any of his fingers.

Gordon, Peter, Michael and Pascal (from left to right) at an Intensive Shaolin Kungfu Course in Malaysia in September 2003 employed Shaolin techniques spontaneously in their sparring. They could do so because they had followed a systematic sparring methodology. 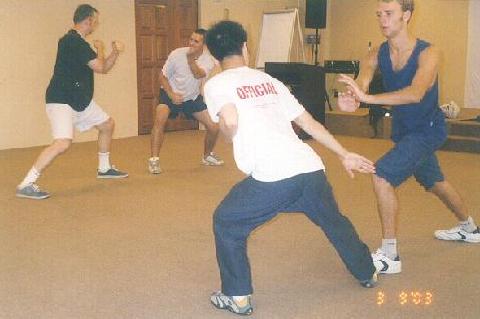 Gordon, Peter, Michael and Pascal (from left to right) at an Intensive Shaolin Kungfu Course in Malaysia in September 2003 employed Shaolin techniques spontaneously in their sparring. They could do so because they had followed a systematic sparring methodology

Many people today, including some masters, do not believe that Kungfu can be used for sparring or fighting. Some argue that classical postures are only for training purposes. Others argue that stances don't work in combat. Others argue that modern methods, like kickboxing and wrestling, are more effective.

If you train sparring systematically in a good school, you will learn, through direct personal experience, the inaccuracy of these claims. Once your elegant and sophisticated Kungfu patterns begin to come alive, you will appreciate the incredible legacy that has been passed down from past masters. If you practice correctly and consistently, you will see that Kungfu — including proper stances and elegant classical patterns — can certainly be used for sparring and for fighting.