The following discussion by Sifu Andrew Barnett and Sifu Darryl Collett is reproduced from the thread Kungfu -- A karmic burden? in the Shaolin Wahnam Discussion Forum on 28th February 2005

Spiritual cultivation is an integral part of the training. These Arts, maybe even uniquely, teach compassion — even in fighting; even in life or death situations.

We live as humans-beings trapped in the endless cycle of birth and re-birth. How, where, when and even if we are re-born is the result of the sum of the karma we have accumulated to that point. The more negative karma developed, the worse our lot in a next life. Conversely, the more positive karma developed, the better our lot in a next life. And, for those who are ready and have achieved karmic cleanliness, the cycle of birth and re-birth may be escaped as they merge with the cosmos for all eternity.

With this very basic level of knowledge, it would seem logical for everyone to try and avoid creating negative or bad karma and try to create as much good or positive karma as possible. This provides the best opportunity to be re-born in a situation conducive to cultivating for enlightenment. 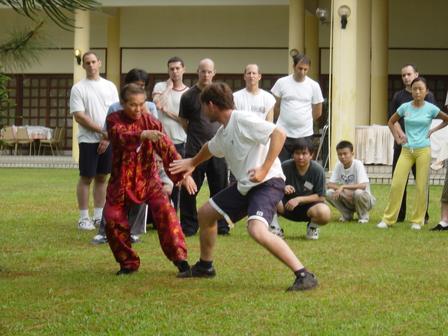 Unlike the brutal and aggressive sparring many people may conceptualize it to be, sparring in Shaolin Wahanm is gentle and graceful (yet combat effective). This photograph shows Luis Sexton sparring with Sifu Wong in a training session during an Intensive Shaolin Kungfu Course in Malaysia in November 2004.

What part does Kung Fu play in this cycle of karmic generation?

It may be easier if we start by defining arbitrary levels of Kung Fu. I must stress that the definition of these levels is in no way intended to belittle any of the arts associated with them. More it is to make the reason for possible karmic effects more comprehensible.

At the first level, a level which many modern schools have adopted, Kung Fu has lost much if not all of its martial aspect. It has become a beautiful demonstrative art — modern Wushu. The exponents of such arts are extremely well trained, physically strong, fit, flexible and agile. They train for the purpose of pleasing spectators and not for fighting. How can this ideal — pleasing others — cause bad karma? I don't think it really can.

At the second level, we look at Kung Fu as a true Martial Art. Martial Arts are, by definition, fighting arts designed to make the exponent an efficient and effective fighter. And how does this affect the karma of the exponents of these systems? It is useful to split this second level into two sub-levels.

The first of these sub-levels represents the many aggressive systems that are taught. They encourage their exponents to inflict maximum damage on their opponents. Quite along the line of “strike first, ask questions later”. It is quite clear that the exponents of such systems are destined to create bad karma. Just the aggressive training methods which are employed alone, let alone inflicting unnecessary damage on opponents, are enough.

At the second sub-level the Kung Fu is still “just” a fighting art. But the exponents are taught to inflict minimum damage if involved in a fight. They are trained in discipline as are those in the previous sub-level. But the type of discipline is different. Exponents of such arts do not fight if they do not need to. In fact they will go out of their way to avoid a fight. Faced with a combat situation which is unavoidable they will defend themselves and their loved ones with the minimum required force. These arts may well generate some bad karma for their exponents if they are ever involved in a real fight. Otherwise, their training is more for peace than war. So the net karmic effects will be positive.

So - is fighting the only component to be considered? Not for great Kung Fu systems such as Shaolin Kung Fu and Taijiquan (both, of course, in practiced as traditional Arts in their original forms).

This is then the final level to be considered.

Both of these systems were developed by monks - those dedicated to spiritual cultivation; their ultimate aim being enlightenment, nirvana, becoming one with the cosmos — or whatever other name you would like to use for the ultimate spiritual achievement. How could such people even consider training in an Art which would, by definition and inherently, move them further away from their goal?

That's exactly the point — they didn't, and we don't either. 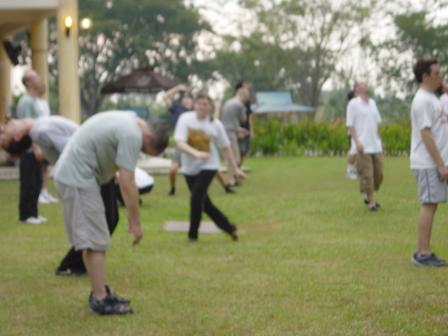 In Shaolin Wahnam, kungfu training is a comprehensive programme for physical, emotional, mental and spiritual development, which obviously contributes to good karma and at the supreme level leads to the overcoming of all karma to attain Enlightenment. Chi flow, as shown in this photograph taken during an Intensive Shaolin Kungfu Course in Malaysia in November 2004, is an effective method for this purpose.

Both Shaolin Kung Fu and Taijiquan are extremely efficient and effective fighting systems. But their exponents are those who are least likely to be involved in a fight. And this high level of combat efficiency often enables the exponents to avoid fighting where it would otherwise be unavoidable. The positive karma generated by this highest form of combat (winning without fighting) is obvious.

The training methods employed are non-aggressive. Spiritual cultivation is an integral part of the training. These Arts, maybe even uniquely, teach compassion — even in fighting; even in life or death situations. In fact it was not unknown in the past for great Masters to sacrifice their own lives in order to avoid killing others --- the ultimate act of compassion. Obviously this sacrifice did not generate the best karma. But the karma generated was far better than would have been caused by taking the lives of others.

So these great Arts are themselves methods for spiritual cultivation. Their correct practice generates good karma. Having the opportunity to learn these great Arts can actually be considered a sign of having accumulated good karma previously. And being able to learn them from a great Master such as Sifu Wong is a blessing.