INTERNAL FORCE -- HOW CAN YOU BE SURE? 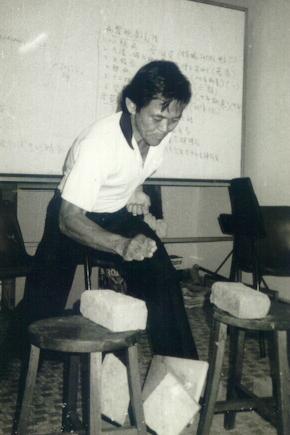 Sifu Cheng Shang Shou, a senior disciple of Sifu Wong, applies the internal force of Cosmos Palm to break a slap of marble with a seemingly gentle tap of his palm. Sifu Cheng's palms are not rough but soft and gentle.

The following discussion by Sifu Anthony Korahais is reproduced from the thread Force — How Can You be Sure? in the Shaolin Wahnam Discussion Forum on 15th September 2003.

This came up in another thread, but I think it's worthy of a new topic:

Quote:
“I have to admit I'm suspicious of someone saying that they can kill someone with a simple technique. Honestly, how do you know? You don't, you simply taking it on faith because your instructor told you so. How does he know, has he killed someone with that particular technique? I know I can break legs and arms and choke people unconscious because I've done it to people in fights, training and competition and had it done to me - I don't need to take anything on faith. To say a certain technique will kill someone though is just supposition unless you've actually done it or know someone who has.”
Faith

The above argument is a common one made by people who have no experience of internal force. People often assume that practitioners of internal martial arts are operating purely on faith. Some even accuse us of living a fantasy. To people with a few years of experience with internal force, it is a non-issue.

A basic tenet in our philosophy is "not to accept any teaching based on faith alone, nor on the reputation of the master, but to assess the teaching to the best of your understanding and experience." Our beliefs are based on experience, not fantasy. We do what we do not just because our teacher's tell us, but because our experience confirms what our teachers tell us.

There are many ways to assess force without actually testing it on a live person. This is true of both internal and external force. One of my old instructors has a ton of force in his shins from external conditioning. He can kick full power at a NYC parking meter and make it wobble. I don't need to see him kick a live person to know he could break a knee with his shin kick.

Similarly, I learned from a master of Fu Jow Pai (Tiger Claw) Kungfu who has powerful hands. I saw him make a bullet-like hole in a thick, corrugated cardboard box using only his pinky finger. I don't need to see him poke out an eye with his other, stronger fingers to know that he can do it. 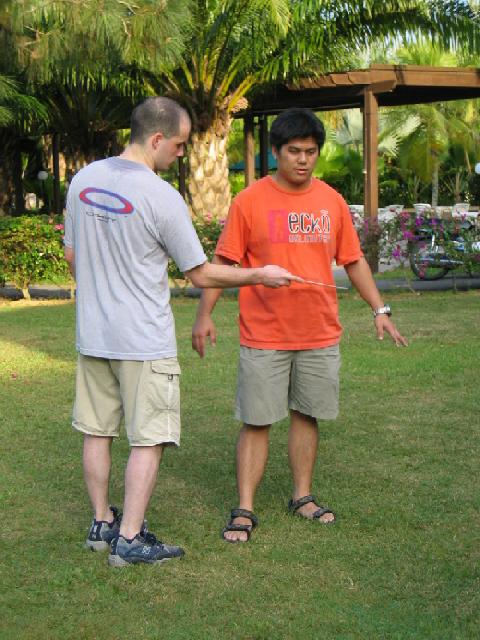 The best way to assess internal force is by direct experience. There are many ways to do this. A combination of experience in yourself and others can give you a good idea of the relative levels of power of students, seniors, and masters.

One important lesson you learn from practicing internal arts is that the force is cumulative and does not diminish with age. You watch and feel your own force gradually increase over years of practice. At the same time, you experience greater force in people older and more experienced than you. Sifu, at age 60, is much, much more powerful than I am at age 31. One of my seniors is 50, but he is far more powerful than me. I'm not talking about technique. I'm talking about raw power.

Once you have developed some force of your own, you can begin to project ahead and imagine how it will develop down the road. For example, I have trained tiger claw enough to get a taste of the potential power even though I have yet to acquire much of that power for myself. I've felt my Sifu's tiger claw at roughly 10% of its power. I can do the math and imagine not only what his claw would do at full power, but what mine will be like if I practice the correct methods.

One of my juniors, with only a year of experience in internal arts, can break the bottom (and only the bottom) of 2 supported bricks. You don't have to be a physicist to know what the same strike could do to someone's heart. If my junior can do that with only 1 year of internal training, what can my seniors do with 10+ years? What can Sifu do with 40+ years?

Force can also be assessed by external means, like breaking or smashing objects. For example, you can test the power of your Cosmos Palm (Hun Yuan Zhang) by breaking the bottom of two supported bricks as described above. Or you can strike a watermelon and reduce the inside to pulp without breaking the rind. Or you can put a piece of tofu in the bottom of a bucket of water, strike the water (with hardly any splash) and burst the tofu. Or you can test your Marvelous Fist by placing a candle behind a piece of glass and extinguishing the flame with your punch.

If you are still not satisfied, and if you are not an animal lover, you might even test your strike on an animal. I know a Baguazhang master who tells the story of his disciple who accidentally killed a dog with a palm strike. The dog jumped up at him and he struck it out of sheer reaction. The dog (which was a friend's pet) died the next day. When the vet did an operation, he found that the dog's internal organs had been ruptured and the dog had bled to death internally. This example was an accident, but in the past, masters would test their power intentionally on animals.

To test your finger strikes, you can try piercing various fruits and objects. Piercing clean through an apple with a snake strike (4 fingers) is not terribly hard. Piercing a watermelon is harder. Piercing a normal breaking board is even harder. However, even piercing an apple can give you a good idea what the same strike would do to an opponent's eye.

To test the accuracy (another aspect of force) of the same snake strike, you can use other methods, like hanging various sized rings from different length ropes and piercing through the rings. Later you can swing and spin the rings. When you can consistently pierce through a small, spinning, swinging ring, you will have a good idea about your accuracy.

Some force training methods (like Iron Fist, which involves hitting a sandbag and gradually increasing the amount of sand) have confirmation built into the method. The strike, done in horse stance and without muscular tension, remains the same throughout the training. You begin with a bag light enough for you to send it swinging with your punch. Obviously, if you can only manage a 40-pound bag in the beginning, but 3 years later you can send a 150-pound back flying, you have confirmation that your force has increased. 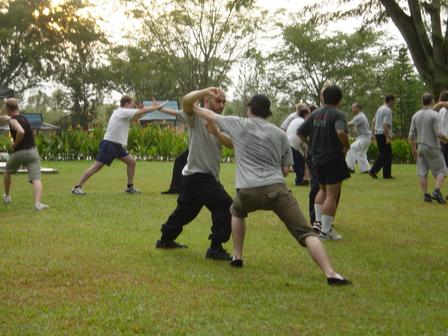 Participants to Sifu Wong's Shaolin Kungfu and Taijiquan courses can spar for hours without panting for breaths or feeling tired. This is due to the internal force training during the courses.

There are also two-person external methods, like Three Star Forearm Hitting, which involves smashing the forearms together in a systematic way. When you knock arms against someone with internal force, you can feel it. There's no other way to describe it. Obviously, reading about this experience and actually feeling it are two entirely different things.

The same Baguazhang master mentioned above is known to give demonstrations of an internal strike to dedicated students. With his palm already placed on your chest, he can send a pulse of force through your body that you cannot help but feel. What's even more amazing is that he can control the force so that it won't do any serious damage. It's merely a taste.

Some of my seniors met Sigung Ho Fatt Nam (Sifu's teacher) and experienced his One Finger technique. I have described this in other threads, but suffice it to say that the effect was amazing. With just a gentle touch of his finger, Sigung was able to drop my seniors to their knees gasping for air. My seniors described the feeling as an electric current running through their body and a heaviness that made breathing difficult.

Then there's sparring. If you spar against someone with internal force, you can feel it. If their level is above yours, you will probably get bruises, even from seemingly light sparring. Similarly, as you develop your own force, you will start to hear complaints from and see bruises on your juniors. Once again, there is no describing this experience. I did plenty of full-contact, no-gear sparring back in my Karate days, but the feeling of internal force is entirely different.

Sometimes, a seemingly gentle block to the leg or arm during sparring will hurt so much that you will have to take a break because your arm or leg is numb. I have both experienced this and done it to others. The general reaction is for the person who did the striking to laugh and accuse the other person of faking it. This is because the strike is so gentle that it's hard to believe (even for us) that it could have caused such pain. Once you are on the other side, however, you begin to understand a bit better.

Internal force is not only used for striking. Arts like Golden Bell develop force as a defense. There are many first-hand accounts of internal masters, like Wang Shu Jin, who could take full power blows to the body without taking damage. One of my seniors likes to invite Tae Kwon Do black belts to kick full power at his body (to no effect). Obviously, these methods are also ways of confirming force.

As for killing or hurting someone, I no longer associate with people who test their force in this way, though I admit to knowing and training with several martial artists who have both maimed and killed people (in self defense). Nor is this kind of confirmation necessary. As your experience of internal force grows, you gradually develop a more and more accurate understanding of how powerful internal strikes can be. The consensus among experienced internal martial artists is that these strikes will eventually (at a master's level) offer more power than you need to kill an average person.

External confirmation of force is not necessary, but it can be useful. In my opinion, the main benefit of confirmation is to give you the motivation to continue through years of arduous, monotonous training. However, if you know and practice the correct methods, you will develop force as a matter of course, with or without external confirmation. Similarly, if you persist, you won't need to take anything on faith or because your instructor said so. You can have all of your confirmation by way of direct experience -- if you continue to practice.