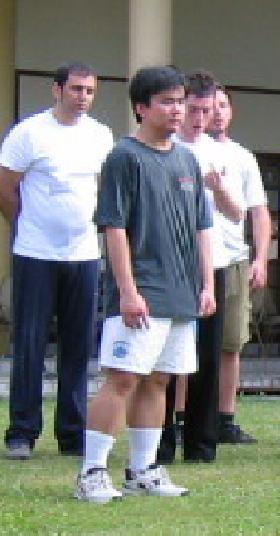 Franciskus at the Intensive Shaolin Kungfu Course in Malaysia in November 2004. Behind him on his right is Gianluca from Italy, and on his left are Jamie from Scotland and Luis from England.

The following discussion by is reproduced from the thread Visit to Sifu Wong, August 3rd to 6th, 2004 in the Shaolin Wahnam Discussion Forum on 9th August 2004

I visited Sifu (Sifu Wong) last week during the intensive chi kung course. He is very kind to spare 90 minutes after the morning class to go over some stuffs with me. Below are some of the things that I experienced during the meeting. I will add more as I settle down since I just came home yesterday.

I will not comment of Sifu's teaching in chi kung or Shaolin because I don't think I can add anything new to what people already have said anyway. Instead, I will comment on the Hsing-I training that I got during those 3 days.

If I were to describe Sifu's kungfu skill in one word, I believe the word “genius” would fit nicely. During the first day, I showed him the 5 elemental fists and some of the 12 animal forms. The very next day, he knew Hsing-I more than I did in my 3 years of study! He showed me the correct Santi Stance (I exposed my groin), how to do Stance Training the Hsing-I way, and some of the applications I didn't even know exists!

The most memorable experience was when he countered my double-leg and single leg takedown purely using Hsing-I techniques. As a person who had studied Shuai Chiao (Chinese Wrestling) before, I know how to perform those aforementioned throws since I specialize in them. So I know whether the counter techniques work or not.

There was no sprawl, no guillotine, just Hsing-I technique! (The techniques he used were “Dragon Descending from Heaven” and “Lazy Dragon Laying on Road” for those who are curious) He easily locked my hands with his legs (when I already grabbed them!) and controlled me in such a way that I couldn't move.

There were no such things like elbow to the back of the head, smashing your opponent's head with your invincible hand, eye gauging or other so called “deadly” techniques that are prescribed by Kungfu “masters” who never grapple in their life. Sifu always emphasize on compassion to your opponent and he showed it during this session. I am truly impressed with his skill. Sifu has truly indeed reached the marvelous stage.

PS: Don't get me wrong here, as I don't want to start a flame war. Those “deadly” techniques can be transformed to deadly techniques if one were to practice them correctly with a grappler. However, it would be better if you work on things that don't hurt your opponent since we live in a law biding society. The last thing you want to do is win the battle (win the fight) but lose the war (going to jail because you kill your opponent)

I'm delighted you had such a good experience with Sifu, though I knew you would. I'm sure you can see now what I meant when I said, "Learning from me is fine, but learning from Sifu is something entirely different."

I wish I could have seen Sifu counter your takedowns. Although I don't know the techniques you mentioned, it sounds fantastic. If we meet again one day, perhaps you can teach me the counters.

I'm always amazed to watch Sifu do spontaneous applications -- especially when they come from other styles! In Toronto, I was awestruck to watch Sifu spontaneously apply Tan Tui against Mike. I think your description is apt. There is no way to explain it other than "marvelous." When I asked Sifu how he can do such things, he simply said, "Once you have the map, all routes become clear."

Regarding your comments about counters to takedowns, I'm sure that Sifu's counters were spectacular, but remember that he's a master. Normal people (like me) often just do the best they can. Unfortunately, this sometimes means resorting to less-than-marvelous techniques like eye gouging, elbows, and palm strikes.

But you are right that my counters are not particularly compassionate. However, that is a problem that is particular to takedowns. Even Chen Man Ching, who was a master specializing in compassionately neutralizing and pushing opponents, once warned that if you tried to tackle him, he'd be forced to strike you.

Nevertheless, when it comes to life-or-death combat, gouging an eye is still merciful compared to killing. Furthermore, some techniques become more compassionate as you develop more force (and control over that force). For example, when my palms are more powerful, I can choose to dislocate the opponent's shoulder with a palm strike instead of gouging his eye or smashing the back of his head.

As I've said many times, I'm no master. When it comes to anti-grappling, I do what I can. I'm too lazy to spend time learning grappling. I would rather adapt techniques that I already have and spend that time practicing chi kung.

I look forward to your next post. It's always refreshing to hear about other people's experiences with Sifu. 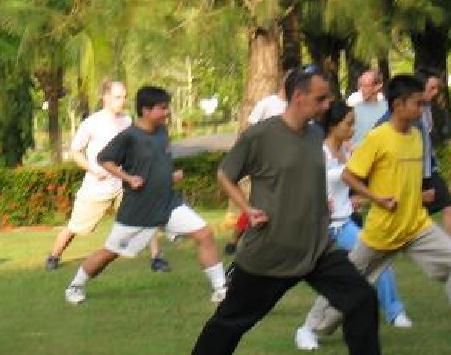 “Did you catch it on video?”

Nope, because I was too busy trying to keep my head from hitting the floor after I try to take Sifu down

Originally posted by Antonius:
“I wish I could have seen Sifu counter your takedowns. Although I don't know the techniques you mentioned, it sounds fantastic. If we meet again one day, perhaps you can teach me the counters.”

Yes, they were fantastic! What impress me the most is that Sifu actually went down with me but he was the one that ended up controlling me with his legs!

If we meet during the intensive course, we can ask Sifu to demonstrate them again on one of the participants (namely me )

“Normal people (like me) often just do the best they can. Unfortunately, this sometimes means resorting to less-than-marvelous techniques like eye gouging, elbows, and palm strikes.”

My post regarding counters are not "targetted" towards you. If that sounds so, I apologized. Yours work remember? You tried it on me during my visit in New York.

When Sifu countered me with those two techniques, I immediately remembered about those occasions and it really struck the cord on my heart.

Honestly speaking, I never knew kungfu counters to double and single leg takedowns with the exception to the deadly techniques I mentioned in my first post. I always asked myself whether there were actually other ways that didn't resort to killing technqiues. When Sifu demonstrated them to me, I knew I had found the answer

In his teaching, Sifu was very meticulous. He knew which part of my body produced tension even though I was not aware of it. A perfect example was in the Golden Bridge training. He advised me to relax my lower back since it was tense. He then held my lower back and corrected my posture. I would not be able to spot this small tension if he didn't tell me about it. A sign of a true master.

He thoroughly explained using examples why certain things were more advantageous than others. For example, he advised me to hold the back hand of my Pao Chuan a little bit further from my head so I wouldl have an easier time to defend against eye attacks.

He also showed me why we shouldn't do a straight line Santi Stance and the purpose of hooking your front foot inward. In addition, he let me “feel” some of the techniques so I could understand the application better.

After demonstrating a technique he always says "Ok, now punch/push/kick/throw/grab me". This enabled me to absorb his teaching quicker and easier.

What I like the most about Sifu's teaching is that he is very energetic and full of charisma . He enjoys teaching and one could tell easily after spending even only one session with him. I have noticed this characteristic is shared by all good teachers (my previous Hsing-I teacher as another example)

If "genius" is a word that describes Sifu's kungfu skill, "profound" is the word I choose to describe his knowledge. Before and after the session, he welcomed every questions that I had and answered them thoroughly, starting from TCM, Buddhism, Hsing-I applications, chi kung and kungfu, and their history.

He didn't withhold any information and communicated his answer crystal clear either by using specific examples or analogy. In addition, he always made sure that I had understood the answer thoroughly.

His profound knowledge combined with years of teaching experience makes him a superb teacher. A person like Sifu is extremely rare because he has both side of the equation: Kungfu skills and knowledge. He is truly a true Kungfu master and scholar indeed.

Sifu was extremely patient when he was teaching me Hsing-I Santi and Half Step Beng Chuan. He didn't mind going over the same stuffs over and over when I didn't understand it, especially in doing the correct Santi Stance.

Sifu is also very helpful. He likes to help other kungfu practitioners, even though they are not Shaolin exponents. On the second day, he told me that he would help me in my Hsing-I as well during the Intensive Kungfu Course. So I will spar both in Shaolin and Hsing-I! This is very comforting to me because I don't need to throw away the Hsing-I that I have learned. To quote Sifu, I can have the best of both worlds

Sifu is also very comforting. I told him about my leg problem (In the end it got really bad that I couldn't even stand for 30 seconds in Golden Bridge). He told me not to worry about it since it was an old injury and the chi was trying to clear the blockage. I have a strong suspicion that he secretly helped me with this injury because two days after seeing him, I could do the Golden Bridge normally again. Thanks Sifu!

The two dominant characteristics that really show are his confidence and charisma. By just looking at him in person for the first time, I could spot these two characteristics easily.

Final Thought: I wanted to see Sifu for quite sometime now but something always came up. This time I finally managed to see him and I dare to say that it was worth the trip. I learned a lot within such period of time. I look forward to see him again in the Intensive Kungfu Course. 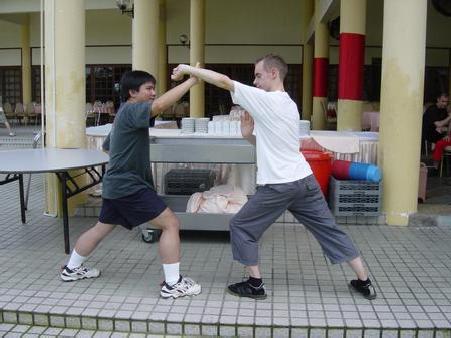