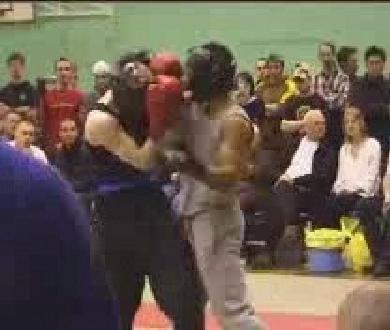 The two photographs shown on this webpage, this one and the one below, were taken at All Britain Taijiquan Full Contact Sparring Competition 2006. Which one you would regard as closer to genuine, traditional Taijiquan? Video clips of the competition can be accessed here.

The following discussion is reproduced from the thread What is Genuine, Traditional Taijiquan? started in the Shaolin Wahnam Discussion Forum on 5th June 2006.

"As a Wahnam Taijiquan instructor, I feel duty-bound to respond to his statements. Hence, I would like to start this thread on "What is genuine, traditional Taijiquan" and invite Kaitain for a public debate."

What is genuine, traditional Taijiquan?


Firstly, I wish to thank Kaitain for his posts which have resulted in some lively discussion in our forum.

Many of the statements Kaitain made are in disagreement with what we teach. From what I have read in our forum and seen in the videos he provided, my impression is that Kaitain is doing some sort of Boxing and Wrestling although he calls it Taijiquan. Paradoxically, he emphatically says that our Wahnam Taijiquan is not Taijiquan.

As a Wahnam Taijiquan instructor, I feel duty-bound to respond to his statements. Hence, I would like to start this thread on "What is genuine, traditional Taijiquan" and invite Kaitain for a public debate. Of course other forum members are more than welcome to take part. I believe such a debate, which should be carried out in a friendly, respectful manner, will be beneficial to many people, and may give some guidance and direction for the future development of Taijqiuan.

In order that we do not go out of topic, I suggest that the debate proceed along the following aspects of genuine, traditional Taijiquan

In the "Grappling & Kung Fu" thread, Kaitain reported what he said about me in another public forum

Originally Posted by Kaitan:
"On the one hand it's good that he's doing full contact, but he beat another clueless taiji guy. Someone with 6 months of kickboxing would have killed him. He seems to recognise that he has work to do though so he may progress."

"I live and teach in Brighton, should Robin or his students wish to discuss it with me, I will happily explain why I think what I do, and show him/them if they are interested. This in an entirely friendly manner - they may well surprise me and if that is the case, I will post a retraction. I do not go in for entrenched positions - if I'm wrong, I will say so."

I would welcome the opportunity of Kaitain showing me his version of Taijiquan in friendly sparring. The objective is not to see who is a better fighter, but to see whether what Kaitain uses and what I use in combat are genuine, traditional Taijiquan.

A video recording should be made, and be released in this forum for our forum members to judge. Who knows, a hundred years later posterity may point to this video and say “Luckily we have a video from the past recording a crucial point in the evolution of Taijiquan to this day.” But if Kaitain has changed his mind, that is fine. 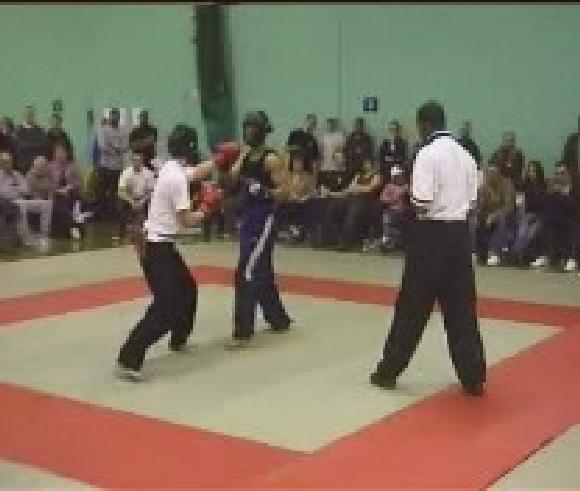 The two photographs shown on this webpage, this one and the one above, were taken at All Britain Taijiquan Full Contact Sparring Competition 2006. Which one you would regard as closer to genuine, traditional Taijiquan? Video clips of the competition can be accessed here.

Sorry Robin, I've been in Montreal on business and just got back so I'm jet-lagged. Consequently if my tone appears aggressive, please don't take it as deliberate - I'm just knackered.

As stated by me elsewhere on this forum, the very act of an audience or videoing prevents it from being a "friendly sparring" session as there is basically too much at stake. If you want to challenge me, Im not interested.

If you want to see what I'm talking about, come and see me and I'll show you (and you can show me) in private. I've been very clear on this from the start - no video, no audience - in my experience it is the only way to avoid bullshit and ego. As a start point I wouldn't spar with you anyway until I got to know you (I have this rule with anyone who trains with me, especially for people Im not teachin) - a taijiquan practitioner should be able to demonstrate most of the principles within pushing hands before even translating it to fighting.

It's a solid way to avoid accusations of boxing/wrestling as well. If you've got 'it' in pushing hands then that's usually enough to prove knowledge and internal skill - should you feel the need to spar after that then I'd be happy to do so at a later date.

Aside from that, I've covered all of your areas in depth on this and other threads here - I see no benefit in doing it again. It'll just lead to "my dad's bigger than your dad" and frankly that's wasting everyone's time. I have my understanding, you have yours - if you care enough to know about mine, then arrange via PM/email to come and see me and I'll gladly cover things in the appropriate manner in private - irrespective of the outcome I won't talk about it to other people (I have had a few exchanges like this and I stick to this for good or ill).

Since I have legitimate lineage from a Yang style master who fully endorses my teaching and skill, I am confident that I am faithful to the Yang family interpretation of taijiquan - it isnt boxing and wrestling.

However, your understanding differs (this is not a criticism, Im just stating where we are different) - given that difference, would it be fair to say that we would be no better off after sparring? If I 'won' you could say it was because of size (I'm 6'4'' and 18 stone - I'd say you were about 5'10 and at least 6 stone lighter?), or because of boxing/wrestling - "not taiji". If you "won" then I could say it wasn't taijiquan (not unlike Dan's challenge to Chu, no?) because it didnt follow principles that I believe are key. Would you or I be any further on in this discussion?

Anyway - the offer is there on those terms, no others. I have nothing to gain or lose by involving myself with this, and consequently I invest nothing of myself in the outcome of the discussion.

PS - I appreciate you are in a somewhat awkward position. My opinions are merely that - if it helps your position then Im perfectly happy for my posts here to be deleted so that you dont feel compromised - I understand how it impacts upon you and your school.

What is Genuine, Traditional Taijiquan?