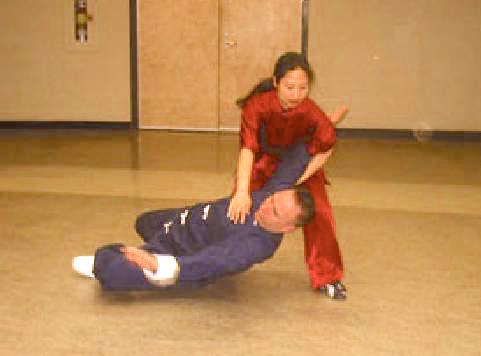 Emiko Hsuen throwing Anton Safar onto the ground during a Taijiquan combat application practice. Emiko uses the “lu” or “roll back” technique of Taijiquan, which is similar to “Uprooting Tree with Roots” in Shaolin Kungfu. Both Emiko and Anton are Shaolin Kungfu instructors.

The following discussion is reproduced from the thread On Wahnam Taijiquan posted by Sifu Emiko Hsuen in the Shaolin Wahnam Discussion Forum on 23rd April 2004.

Sifu Emiko Hsuen is a good example of our concept of a scholar-warrior. She is gentle and elegant, yet very powerful. Besides being trained in various styles of kungfu and wushu and having won a few gold medals in international competitions, she runs her own business, and is also a writer and musician, having her musical composition performed publicly.

I trust that you are all well and full of "vitality". A special "hello" to my taijiquan brothers and sisters.

Today, I am writing to express my deep respect for the taijiquan that Sifu teaches. For the first time, I had the privilege of attending his taijiquan course this past week (yesterday was the final day). It consisted of six 3-hour sessions.

As many of you know, I am (for categorical purposes) part of the kungfu branch of this family. However, before studying kungfu with Sifu, I had learnt various forms of taijiquan (with other masters), hence my interest in Sifu's taijiquan course. I will also admit that I had an ulterior motive of wanting to find a way to consolidate my previous taijiquan training with shaolin kungfu.

What I received was beyond my expectations.

In truth, my past masters can be traced directly back to the Taijiquan Greats, for example Yang Chen-Fu himself. So, whenever anyone used to ask me where I had learnt my taijiquan, I was able to give an answer that showed that I had not learnt from a "quack" and guaranteed respect within the martial arts community. Indeed, I did learn very much, and am grateful to my previous masters for their teachings.

My point is not to criticise my past teachers, but rather to highlight Sifu's unique and wondrous ability to breathe life back into forms which have somehow degenerated into empty shells. Personally, I think that part of the reason why he is able to do this is because he understands the components of Shaolin Kungfu so well. I think that Shaolin Kungfu forms the "building blocks" of complete martial arts cultivation, and that by knowing this, Sifu has mastered the art of translation where martial arts is concerned.

How fortunate I feel to have a sifu who has the courage to take a stand and go out of his way to try to preserve the "living aspect" of other worthy arts/styles such as taijiquan. I, for one, am honoured to be learning taijiquan from Sifu and would be proud to lay claim to this family, not only as a Shaolin Wahnam disciple, but also as a first-generation Wahnam Taijiquan practitioner.

I look forward to the continued growth of the Wahnam Taijiquan branch of this special family.