Taijiquan is a martial art

The following discussion is reproduced from the thread Reflection on course in Toronto posted by Brendan in the Shaolin Wahnam Discussion Forum on 2nd May 2004.

I hope that this posting finds all of you well and happy. I am writing after some days of reflection on our Taijiquan class in Toronto with my thoughts and experiences. I have been practicing Qi Gong for about 18 months now, since learning from Sifu in Toronto in November of 2002, but I hadn't ever taken any courses in Kung Fu or Taijiquan. What little I knew coming into the course of actual forms or applications came from watching Anthony sparring the few times I had the opportunity to do so, and from reading Sifu's books.

The experience that I had in the course was far beyond anything I anticipated, thanks in no small part to all of you I had the privilege of studying with. Just being in Sifu's presence has such a powerful positive effect on my energy, mind and spirit. I came to the first class after having spent 8 hours driving from Chicago, and I was tired and stiff when we started. By the end of class, I was so energized that when I got back to my hotel I took the stairs to my room on the 4th floor two at a time!

Every night, when class was over, my legs were sore from training for almost three hours straight, but I couldn't even begin to say that they were tired. By the end of the course, I would venture to say that I had more flexibility in my legs and trunk than I have had in many years, and a couple of old injuries I had are beginning to show signs of finally, truly healing. For this alone, I would have said the course was worth every penny and every minute spent. But that has been just the beginning of my benefit.

The freshness of mind and lightness of spirit that I've also experienced from the course and subsequent practice has been, simply, amazing. Things that used to bother and frustrate me, like unexpected problems with work or life, or mean or uncaring people that I might have the misfortune of interacting with, simply don't bring me down any more. I feel like I have been given a whole new set of mental tools to bring to bear on things, together with an internal source of happiness and emotional reserve that I never had before.

Solving problems at work now seems like an enjoyable exercise for which I am well-equipped, rather than an unpleasant chore. Dealing with nasty people now seems like a momentary pause in an otherwise stream-like sense of tranquility. When I deal with these situations now, I find myself almost reflexively smiling from my heart. Not only do I not get upset with the unpleasant person or circumstance, but I find myself expanding the good feelings I have within me to encompass them. I left a gallon of sweat, toxins and bad feeling in Toronto and came back to Chicago lighter, more energized and happier. I hope no one finds fault with me for exporting my bad energy to another country! 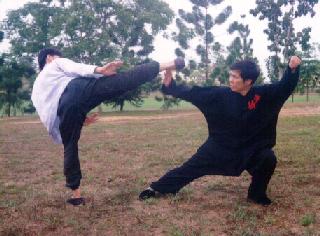 I used to think that the chi flow I got from qi gong exercises was powerful, but this course has truly brought things to a new level. On the third day of the course (I think), when we were learning Three-Circle Stance, I finished the exercise literally feeling like my arms were made of hard but flexible metal, and they were surrounded by a buzzing cocoon of electricity. After we started practicing Pushing Hands, I felt in many of you that very same hardness and energy (in some to a much greater degree!).

I had heard about, read about and seen internal force applications before, and had felt a very small amount of it from practicing Golden Bridge after Anthony taught it to me, but practicing Push Hands was a realization that, whatever previous doubts I had aside, this internal force stuff is really REAL. I now “know” that if I continue to practice diligently, I “will” be able to achieve things that my physical body alone could never do.

Combining that with the forms and applications that we learned, I can see much more clearly that the words Sifu uses, that Taijiquan is a “martial art”, are true. The simple exercise we did to defeat an attacker grasping our arm using lu or "roll back" was enlightening, in itself, to that end. Had the course taught us only the forms, it would have been valuable. But learning the applications of those forms raises Sifu's teaching to a higher level, indeed. Although I learned something from literally each and every member of the class while practicing Push and Strike Hands, I would like to extend special thanks to my seniors Anton, Emiko and Anthony for being particularly helpful and instructive.

I look forward to more Taijiquan discussion on this forum, and any future opportunities I might have to train with Wahnam Taijiquan students. If any of you find yourself in the Chicago area, please drop me a line!

Many thanks again to all my Wahnam brothers and sisters, and thanks above all to Sifu for sharing this wonderful art with us!