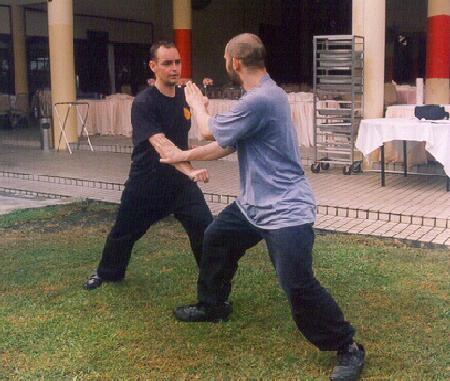 Tim and Mohammed, both from England, practiced sparring during the Intensive Shaolin Kungfu Course in Malaysia in November 2004

The following discussion is reproduced from the thread Expanded Awareness in Germany posted by Sifu Tim Franklin in the Shaolin Wahnam Discussion Forum on 14th July 2004.

First I would like to offer my sincere thanks to Sigung, Sepak Kai and all those involved in Frankfurt this week gone.

All past training courses with Sifu Wong (sigung) have been extraordinary, this was no exception. During “Separating Water” there was a period when I was no longer in my body, my mind was clear and even though I was at the front of the class with people behind me I could clearly see them all doing “Separating Water”.

At this time my eyes were closed, my awareness had merged into the room so I became aware of everything. Not only could I see everyone doing the exercise but I could also feel their flow of energy. This increased the intensity of my own flow of chi. It was truly a beautiful moment.

Most people would be content with this but the experiences of merging continued with other exercises at different degrees. During “Nourishing Kidneys” I felt an explosion of warmth from my ming-men point which flowed to my dan tian. This was followed by a bright light entering into my body that I could see around my dan tian (in my mind's eye). The warmth and flow of energy flowed next down to my chang-qiang, down my legs like a warm flowing stream and out the soles of my feet.

These are just two of the many beautiful experiences I gained from doing the Chi Kung course. In my view this course is a must for anyone who would like to progress further with their chi kung, health and happiness.

After all, life is a meaningful flow of energy. 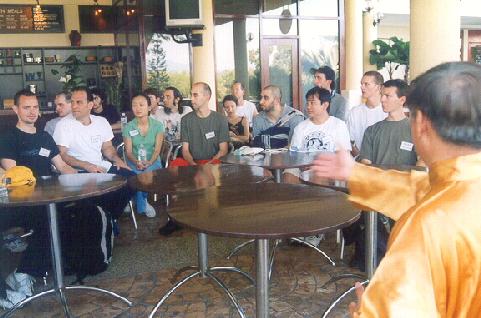 Sifu Wong invited Tim (far left) to give his views during a discussion at the Intensive Shaolin Kungfu Course in Malaysia in November 2004.