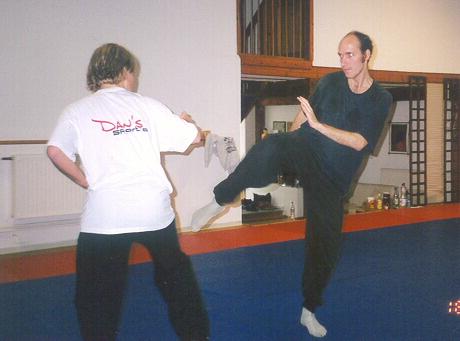 Hans and Tim sparring without wearing any protective gear during an Intensive Shaolin Kungfu Course in Frankfurt in 2003. No one was hurt though the sparring was vigorous.

The following discussion is reproduced from the thread Taijiquan Sparring posted by Anthony Korahias in the Shaolin Wahnam Discussion Forum on 11th April 2003.

Anyone who says that they 'fight'/spar' without protective gear is NOT doing Gung-fu as people would be killed!

Obviously, I have to respectfully disagree with this statement.

I agree that sparring without protective gear is incredibly dangerous. The reason my partner doesn't get hurt is because I control my techniques, and vice versa. For example, when I throw a Leopard Punch to my partner's throat, I don't make contact, but stop the punch an inch or so short. Similarly, if my partner gets through all my defenses, I trust that his punch will not penetrate the target. This is how Sifu trains us.

Landing my punch an inch from the target is "real" enough. I spend at least 30% of my time training force. I don't need to make contact with my partner to confirm the power in my strike. I am confident in my force. I know that I can apply my force whenever I choose.

Furthermore, this kind of sparring is in keeping with Shaolin philosophy. We train to be so much more skillful than our opponent that we can actually execute compassion in the middle of a life or death confrontation. Even when confronted by deadly force, we aim to respond with the least amount of force necessary to neutralize the situation.

We use many methods to train this ability. Of course, sparring training must be systematic in order to reach a point where you can spar safely using dangerous techniques like Leopards to the throat, Snakes to the eyes, and kicks to the groin. Our method was outlined in this thread, the 7th post: http://www.wongkiewkit.com/forum/showthread.php?threadid=104 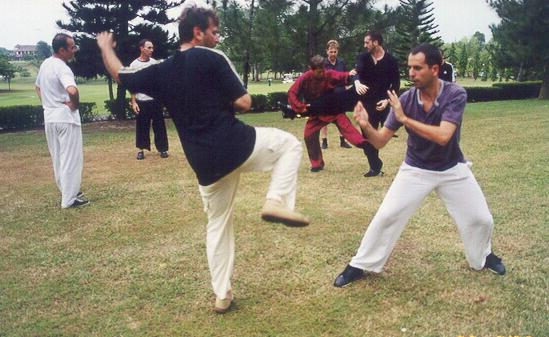 Riccardo of Italy and Jorge of Spain sparring during a Special Taijiquan Course in Malaysia in 2002. In the background Sifu Wong demonstrated a counter against a kick executed by Jeffrey, while other course participants observed. Vigorous sparring using Taijiquan techniques was a crucial feature of this course. No one wore any protective gear and no one was hurt.