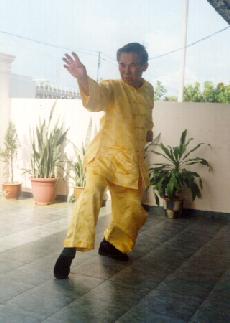 Thanks, Sihings Marcus and Korahais, for surfacing this.

Those explanations from past Taichi Master were meant for the students learning directly from them, and not for today's practitioners!

But then occasionally when practicing I experienced something that made me understand the meaning of those explanations! So knowing them (but not yet understand) is still benefial.

Why not start a thread discussing this interesting subject in Taichichuan Section?

P.S. Sifu again explained some of the secrets during the recent Intensive Taichichuan Course.

kai xin... hao yunqi...
Be happy n joyful... and share the joy with others

While explanation of "style" such as given by Steve can be considered as 'Flowery Adverbs and Embroided Adjectives', and I fully agree that there is no need to complicate things with explanations that may be confusing instead of making it clear, or even not clear to the explainer himself, I certainly would not agree if the same attribute is applied to the sayings of past Taichi Masters like The Ten Points of Yang Chen Fu, and other great poems such as Song of Silent Sitting attributed to Zhang San Feng, Secret Song for Practicing by Wu Yu Xiang, and Classic of Yellow Palace by Chen Wan Ting, and others.

It is true that it is not easy to grasp the meaning of those poems. There will come the time when the practitioner can grasp the true meaning, through experiences in our practice. The experience will not be the same for each practitioner, though. Meanwhile, it is better to give explanation by not using the phrases if one has not understood the phrases reasonably well.

One may ask then why we should give such attention to those poems which we have not yet understood?

kai xin... hao yunqi...
Be happy n joyful... and share the joy with others 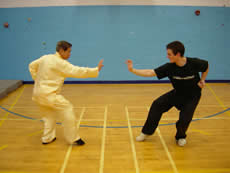 I'm sorry for the confusion. I've tried in my previous posts to use different terminologies and explanations, even an exercise. I was taught with those words. My teacher could do what he said and pass it on. At first I thought those words were confusing and I was sure that there were better ways to explain these methods. Once I started grasping what was being taught, I realised those words pretty much had it covered.

If you were to explain, in words, about chi flow to somebody that wasn't familiar with the experience, they wouldn't catch what you're actually trying to get across until you get them to feel it for themselves. Fortunately with Sifu Wong's method, chi flow can be taught in minutes.

Unfortunately the more subtle something becomes words begin to fail. That's why poems were written instead of direct explanations in order to get across a feeling. Once experienced, then it's obvious.

Attempt to explain "Transparency". It's right there in front of you, but when you try to grasp it you seem to go right through it" It would be like, putting your hand out to shake hands, but as the person is about to take hold of your hand, you slip your hand away... and they grab sweet fresh air . Or when you think there's a step and there isn't. In yielding your whole body needs to be like the hand that disappeared or the step that isn't there. Your body is soft, it's a mind thing. To be honest this is a pathetic explanation. I can see dodging an attack instead of yielding.

All I can say is that, from what I've seen, there is an aspect of yielding that is not being addressed. I'm unable to explain in words and to be honest I don't think a video would help either. When your teacher demonstrates yielding right in front of you and at first you have no idea what's actually happening. With correct guidance and practise it comes.

I've brought it to your attention, perhaps further down the line in your training you might find it necessary to seek this out.

Nice explanation, Steve. Thank you for that.

Actually, I agree with you on many counts. What you are talking about is a depth of skill. It is not so much different as it is deeper, at least if I am reading you correctly.

Here's a more "solid" example that will hopefully clarify things for everyone. Imagine that we are having a discussion about the uses of the Tiger Claw. Imagine that most of what is being discussed is various ways to grab your opponent's arm. Then imagine that someone who has a very powerful Tiger Claw steps in to the discussion and says, "You don't just grab; you grip! End of fight!"

My point is that the students talking about grabbing are not wrong. Neither is the person with the powerful Tiger Claw. They just represent different stages of development.

Actually, what we are talking about here is not just beginner's stuff. It is quite sophisticated. In Shaolin Wahnam, even fresh beginners are taught sophisticated techniques. But the way a beginner use "Single Tiger Emerges from Cave" is not so much a difference in technique as it is a difference in skill

At least mention the skill ("the grip") that can't be explained in words, so that people become aware that there is more. Otherwise the "grab" may stay a "grab" forever! 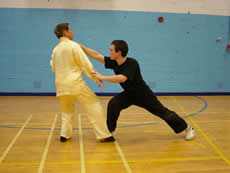 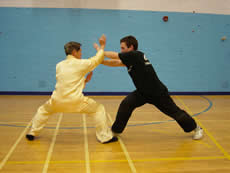 Today I became aware that I had not posted Sifu Piti Parra Duque's contribution to this thread. So for the sake of completeness, please find his post on Yielding and it's application to business below:

I thought you could use this info about other applications on the art of "yielding".

You might not know this, but other than teaching Shaolin Wahnam Chi Kung I work for Parra Duque & Asociados, a Latin-American-based corporate development company.

One of my reasons to practice Taichi Chuan is because I've found it to be a great metaphor for many applications in the corporate world. Recently, I've been teaching executives "fundaments for negotiations". Here, we have come to realize the importance of "yielding" as a conscious role of a negotiator.

We usually come into a negotiation looking to win. Our negotiation power focuses on our rational capacity to debate and find comparative strengths on our services/products/prices/discounts... Usually, when focusing on this "Argumentative" side of negotiations, we forget about "the Fundamental" part of it. As if we would forget our stances in TCC and focus only on arm/hand movements.

These fundamentals include the conscious capacity to yield gracefully to allow the counterpart to "attack" with arguments, giving us the opportunity to generate new perspectives in the negotiation. Yielding in a negotiation does not mean giving up or losing, but offering vulnerability through questions about the counterpart's perspective to allow the full debate to happen. Once we have attentively and actively listened to their offer, and have asked with real interest to fill us up with more info about it, showing interest in finding a new outcome, the counterpart usually feels less threatened, opens up and allows for both parts to find a more reasonable outcome.

This is a very difficult habit to acquire. We tend to enter a debate with "force against force" causing a no-exit situation. We both lose, but each feels they won "their one case", because we proved the other one wrong. Yielding is an art which needs to be trained and practiced until it turns natural. A negotiator that knows how and when to consciously yield has better fundamentals to make his/her arguments more effective.

Ah, that's better, I now feel that this thread is complete. Thank you for reading and to all who contributed. I know I learnt a lot