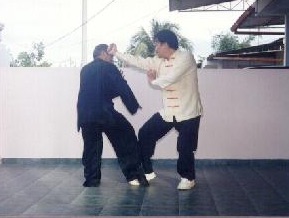 Suppose your right arm is being held at the wrist by your opponent's right hand, and he is pulling you forward. How would you counter using the yielding concept in Taijiquan?

Before reading on, give this question some thought, it will help you to get more out of this post.

First, don't resist. If his grip is form and you pull back your arm sharply, you may dislocate your wrist.

Instead, follow the momentum of his pull. This is yielding. Use your left hand to ward off any strikes he may make with his left hand. But you must not just move forward directly, as suggested by the Challenger's advice earlier. In my opinion,i f you do, it would be you, and not your opponent, who might stumble and fall face down.

Then, what should you do? As you move forward, rotate your waist in an anti-clockwise direction, and simultaneously move your arm backward, upward, forward and downward in one smooth circle in a "hanging fist" pattern. The circular movement of your hand will release his grip. Then "hang" your right fist on his head, shoulder or collar bone.

This is the secret -- one that many masters in the past kept. (I do not know about Sifu's case here.) This is also the continuous process of yielding, deflecting and countering in one smooth movement, and the movement must be large -- an important point I mentioned in an earlier post where I disagreed with the Challenger's concept that movements must be reduced in size to be combat effective.

If your opponent avoids your “hanging fist” or if it is not convenient to strike him when your fist is coming down, you can bring your fist up again in an arc to strike his temple, using the Taijiquan pattern “Yellow Bee Sucks Pollens”.

I know that Sifu taught this counter at a recent regional Tai Chi Chuan class in Costa Rica. I will try to get some photo's from that event (if you're reading this and you were there, can you post them here, or send them to me and I'll post them.). Failing that me and my trusty companion Simon will give it our best shot at Wednesdays class (SMILE)

I will shortly be posting a lovely e-mail I received from Sifu Piti Parra Duque (after asking his permission of course). It relates to Yielding in Business practice. I think it makes a perfect addition to this thread because one of the major differences I have noticed between Shaolin Wahnam and other schools is our use of tactics and strategy not only for combat use, but perhaps more importantly in our every day lifes. Sifu Piti's e-mail is an excellent example. 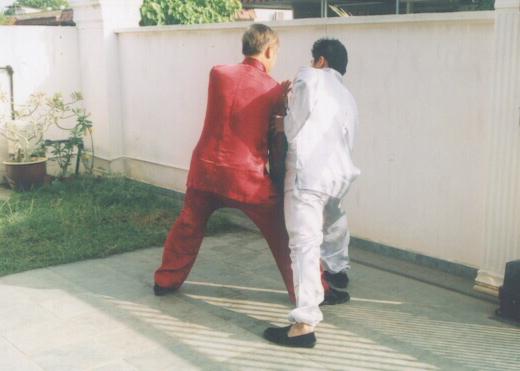 Instead of a "hanging" a Golden Lotus, you can use a "shoulder-strike when someone pulls you

I have been following the various applications of "yielding" against different attacks, which is all good, but I still feel that the concept of yielding in a true tai chi sense is missing.

All those applications of "yielding" can be described by using other terms, which I have mentioned before. Basically, the "yielding" applications are done with substantial energy.

If we keep a substantial state with our chi flow movement, our mind hasn't truly changed from a person that uses physical strength. We have merely replaced strengths. Staying substantial when yielding, even when using chi flow, would make it an external form of internal.

Tai chi is internal, internal... one's general state becomes insubstantial... it's based on the Tao!

Thanks for sharing your thoughts. I have to say though that your "style" of explanation was one of the main reasons that I stopped practicing Tai Chi many years ago. As a student then (not with Wahnam) I gave up on ever understanding Tai Chi Chuan, believing myself to be just too ignorant to ever understand all the principals and "concepts". Your last post was a typical example. Quote:
“It's about being insubstantial. When you yield in tai chi, you become insubstantial. You become transparent!.”


I believe that all such an esoteric explanation achieves is to make something far more confusing and ambiguous than it really is. In my experience if you can't explain something clearly and simply in terms that students can understand, then you probably don't understand it clearly yourself. I'm sure this is not the situation in your case, but I am tired of reading and hearing such confusing and meaningless explanations, especially in relation to Tai Chi Chuan.

I am so delighted to be a student of Sifu's, because what he teaches and what he explains is simple, direct, effective and easy to understand . Just read any of his Q & A series if you want an example. Here's an example I feel relevant to this post (taken from Sifu's June 2001 (Part 2) Q & A):

“I clearly remember that in my early days with Sifu Ho Fatt Nam, my sifu told me, "One does not learn kungfu, he practises kungfu."
That was good advice from a great master. When you learn kungfu, you add techniques, or worse still you add theoretical information. When you practise kungfu, you go over and over again what you already know, without adding something new.”


These days I much prefer to practice what I know and leave the "Theory" for others to spend precious time on. 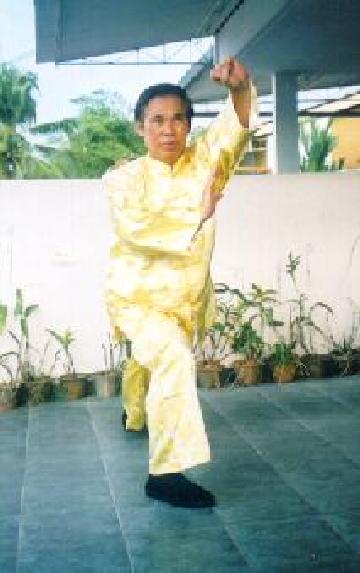 The Taijiquan pattern "Yellow Bee Sucks Pollen" is known in Shaolin Kungfu as "Hang a Golden Star at a Corner", demonstrated above by Sifu Wong

I think we need to coin a new phrase as Kung Fu spreads across cyberspace. Instead of "Flowery Fists, Embroidery Kicks," how about something like "Flowery Adverbs, Embroidery Adjectives"? (Smile)

Steve, I agree with Marcus. We've never met (er, have we?), but somehow, I think that you do understand what you're talking about. And yet, I also agree with Marcus that your style of explaining things is not for me.

To each their own. (SMILE)