SOME EXAMPLES OF YIELDING IN SHAOLIN KUNGFU

Could you tell three examples of yielding in the series of photographs above?

Some very interesting conversations. MomoJuice has hit the nail firmly on the head when he wrote:

Quote:
“There is a transition stance before the Horse Stance (before picture 1) where Siheng Marcus probably moved into a Bow-Arrow Stance, then he shifted his weight to a Horse Stance to properly perform the felling technique.”


My apologies, I had assumed that everyone would realise that the picture sequences showed the “interesting bits” and not the whole sequence. The same goes for the Shaolin Kung Fu counter pictured below. It shows a part of Combat Sequence 13. The full sequence can be viewed here for interested parties.

Picture 1: I shift into a Horse Stance to perform “Fell t Tree with Roots”.

Picture 3: Simon follows up moving his front leg forward and striking with Butterfly Palms (not shown). As Simon pushes me, I step back with my right leg, neutralizing his push whilst separating his butterfly palms.

Picture 4: I respond with an “Organ Seeking Kick”, Simon shifts back into a false leg and “Trims Bamboo”.

A picture paints a 1000 words so the saying goes. It's very useful, but impossible to learn the transitions between stances from. A video shows 100 000 words, incredibly useful as it covers everything (external!). Learning from a Master is without comparison. It is the best. Period. Whether your preference is for Shaolin Kung Fu, Wahnam Tai Chi Chuan or Shaolin Cosmos Chi Kung take advantage of this year's UK Summer Camp to learn these Arts directly from Sifu (Shaolin Grandmaster Wong Kiew Kit). Don't let this opportunity pass you by.

In the next few days I will look at Yielding and grips. I've a few interesting surprises in store for you and as this thread enters into its final phase I hope you'll continue to stop by next time you visit the forum.

Best wishes to all

Re-reading the last few pages on this thread has compelled me to explore a few issues in more detail. So the use of Yielding against grips topic will be put on hold for a few days. I told you to expect some surprises. (Smile)

I have some very interesting information that I hope to share with you, but due to the "sensitive" nature of this material I am in the process of checking with Sifu to see if I have his permission to share it here. I will say no more about this for now.

Firstly, a quick reminder that one of the main purposes of this thread was to contrast high level concepts and techniques with those of a low level .

“No one takes horse stance as in initiating an aggressive action.”

This statement demonstrates a shallow understanding and a lack of exposure to Kung Fu combat because a skilful exponent may attack or defend using any stance.

To back this point up I would high-light that all of the initial attacks in our Shaolin Combat Sequences 17-20, found in the set Fierce Tiger Descends Mountain, are executed in the Horse Riding stance. 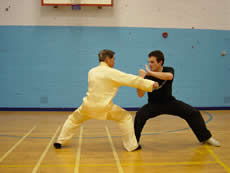